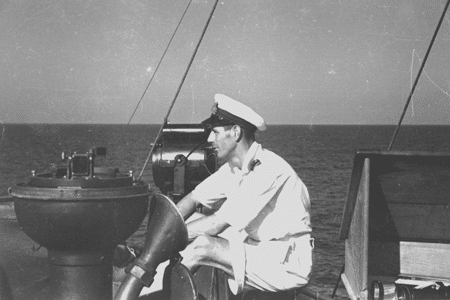 When the Queen Street riots broke out 14 April, 1932, in Auckland, the RNVR were called upon to support the police in quelling the disturbances. The reservists also provided guards for government buildings and food warehouses and to assist in their duties, were sworn in as Special Constables. Bunty Palmer marched to the foot of Queen Street with a RN contingent then proceeded up the street, in a show of force to any civilians who wished to start any further trouble. He was directed to stand guard over Pascoe’s Jewellers which had been looted in the riots.

In 1933, Bunty Palmer, took a leave of absence from the RNVR (NZ) journeying to England to work in firms that supplied his father’s company. From 11 January 1934 to 7 February 1934, he served on HMS Hood for twenty-eight days as part of its spring cruise to Spain, Madeira and Gibraltar. The Captain of Hood noted he was a popular officer and took ‘a keen interest in his work and has identified himself enthusiastically with all the Ship’s activities.’

He was promoted to Lieutenant on 19 June 1934, and shortly after passed the first navigation examination. On return to New Zealand in 1935, he spent time training in the cruiser HMS Diomede, and in 1936 undertook mine warfare training in the Hauraki Gulf in the minesweeper HMS Leith.

In 1938, he was aboard HMS Achilles when she attended the Sesquicentennial Celebrations in Sydney. The commanding officer Captain Glennie noted that Palmer was ‘most keen and zealous’.

By 1939, Bunty Palmer was running a successful Gymnasium business in Auckland with six locations. At this time officers in the RNVR (NZD) were expected to attend 2-3 parades per week, and assist with the instruction of the ratings. They would also attend Saturday afternoon classes with their men. Lieutenant Bunty Palmer was called up for duty on 9 September, 1939 while he was at the Keane Navigation School, held in the Ferry Building in downtown Auckland, on a refresher course. The Navy Board had issued the Naval Mobilisation Emergency Regulations on 1 September, 1939, outlining how the reservists would be called up for duty.

The Captain’s Motor Boat from Philomel was the first craft to be used for harbour patrols. Lieutenant Palmer and four ratings were assigned to this boat on 9 September, and he was tasked with patrolling the eastern approaches to the Auckland Harbour.  One of the crew was Ordinary Seaman Sheffield who would later save Palmer’s life, when in 1943 the HMS Cromarty blew up. They would patrol from 7pm to 7am along a line from Brown’s Island to Emu Point, when the channel was closed to all shipping.

Palmer was then given command of the requisitioned fifteen metre diesel launch, Wirihana. His duty at this time consisted of night patrols and daytime resupply runs to the Port War Signal Station at Tiritiri Matangi Island. One night Bunty Palmer stopped the launch of the General Commanding the Auckland Area, and ordered him to reverse course and sail through the access channel so it could be cleared as per the protocol. This did not impress the General, but in Lieutenant Palmer’s defence, the General was attempting to sail after 7pm and ran the very real risk of being fired upon by the coastal batteries. He continued his patrol duties for six months.

In May 1940, all RNVR officers were called up for active service. Lieutenant Palmer left for England aboard the Empress of Japan with 27 RNVR officers (including J.G. Hilliard) and 200 ratings in a draft sailing with the Second Echelon. He arrived in Britain on 16 June, 1940 after serving as crew with the RNVR officers and ratings, for the passage from Cape Town, after the civilians refused to proceed into a war zone. Once in Britain, he was sent to serve with the minesweeping flotillas and was appointed to a command on 23 July 1940.

His first command was HMS Pine, a Tree-class trawler. She was part of the 24th Minesweeping Anti-Submarine Group which consisted of five trawlers. Ten of these ships were made available for command by New Zealand RNVR officers. The ship’s company consisted of four officers and 29 ratings. Part of the function of the flotilla was to escort coastal shipping and sweep for mines during the height of the Battle of Britain. Minesweeping around the British coast was very difficult and dangerous work. For example, in October 1940, the survivors of the minesweeper HMS Hickory were rescued by the Pine at great risk to itself, while sweeping large minefields off Falmouth. This task took over two months to complete. In 1941, Lieutenant Palmer was awarded the Distinguished Service Cross (DSC) for gallant and distinguished service in minesweeping duties. Palmer relinquished command of the Pine on 31 August, 1941. It was during 1941, that he was granted a full watch-keeping certificate.

On 27 October 1941, Palmer was appointed to command HMS Cromarty, a Bangor-class fleet minesweeper launched in 1941, as part of the 14th Minesweeping Flotilla. He was the first Lieutenant RNVR to have a command of a fleet minesweeper. He was promoted to the rank of Lieutenant-Commander on 20 February 1942. Cromarty and the Flotilla was part of the fleet (Force H) tasked with the capture of Diego Suarez, a port on the island of Madagascar, at that time a French Vichy colony. This was successfully seized by 7 May 1942, after a two day assault. The flotilla also supported the landings at Majunga and Tamatave. The minesweepers cleared a channel to the anchorage at Courier Bay, and then continued to sweep for mines during the two day battle with the Vichy forces, as well as rescuing downed aircrew.  Cromarty and her sister ship Cromer, were described as the ‘outstanding ships of the 14th Flotilla’. The Flotilla was then sent to the Eastern Fleet based at Kilindini (Kenya). In September 1942, the Flotilla participated in the capture of Majunga and completed the occupation of Madagascar. Palmer was Mentioned-in-Despatches for his part in the clearance of 57 mines that had been laid in Courier Bay. This enabled the landing craft and transports to safely enter the bay.

Cromarty and the 14th M/S Flotilla were then transferred to the Inshore Squadron based in Alexandria, just as the Battle of El Alamein opened on 23 October, 1942. They were designated to provide support to the Eighth Army as it advanced. On 9 November, 1942, Palmer was appointed as Second Senior Officer of the Flotilla. The eight minesweepers in the Flotilla completed the longest continuous minesweeping operation in naval history, covering 1800 nautical miles (3334kms) and opening six major ports. The Flotilla also escorted convoys to Malta. They would sweep for mines in the daylight and fight off aircraft attacks at night. In February 1943, Palmer was awarded a Bar to his DSC for bravery and enterprise in supporting the advance of the Eighth Army in the successful conclusion to the campaign for North Africa.

The 14th Flotilla was then assigned to the fleet supporting the invasion of Sicily, Operation Husky. From 9 July, Palmer’s Division of four minesweepers (HMS Cromarty, Seaham, Boston, and Poole) along with trawlers and motor launches, swept the approaches to Syracuse, Augusta, and Catalina, and carried out ASDIC patrol around the anchored transports. Three days later, on 12 July 1943, the Cromarty and Seaham captured the Italian submarine Bronzo and 36 of her ship’s company, assisted by the cruiser HMS Uganda. Cromarty attacked a second contact with HMS Pendant, joined by HMS Poole, and successfully sank a second Italian submarine. Later on, HMS Boston and Poole attacked a third contact without success.

On 19 September 1943, Palmer’s Division opened the Italian port of Crotone. For this and his work during Operation Husky sweeping the channels into Syracuse and Augusta, Palmer received a second Mention-in-Despatches for gallant and distinguished service and untiring devotion to duty in operations, which lead to the capture of Sicily by Allied forces.

A month later, on 23 October 1943, while sweeping the Strait of Bonifacio between Sardinia and Corsica, in preparation for the landing on the southern French coast, HMS Cromarty struck a mine and sunk with the loss of 25 of the ship’s company. Palmer himself was severely injured after being blown off the bridge and onto the after gun position. He was evacuated to a hospital in North Africa, passing through another six and a trip on a Canadian hospital ship, before being transferred to Sherborne Naval Auxiliary Hospital at Dorset, on 24 December 1943. He was placed on the dangerously ill list in November 1943, and only removed from the seriously ill list in January 1944. By 1945 he was walking again. He recalled the event in a letter to the other surviving officer off the Cromarty:

‘We were preceded by a captured Italian shallow draft sweeper. It was not long after ‘Out Sweeps’ that the Italian cut a mine. Suddenly I saw my forward lookout point ahead, turn and shout. I ordered ‘Hard a starboard’ hoping to clear the mine. We actually struck the mine at 11.23. I remember no more. I lost about [five officers], 20 dead [of the ship’s company] and many others were badly injured. I spent many months indeed years in various hospitals and eventually returned to NZ by hospital ship in March 1945.’

Commander W.A.T. Irvine, Commanding Officer of M/S 14th Flotilla noted of Palmer, that ‘no man had a finer 2nd Senior Officer than I did in Bunty. He earned far more recognition that he received, his decorations being very well earned indeed.’

He was finally discharged from Sherborne in November 1944 and arrived back in New Zealand aboard the Hospital Ship NZHS Maunganui. He was admitted to Rotorua Hospital on 13 April, 1945.

On 16 April 1946, Bunty Palmer was discharged and demobilised as physically unfit for Naval Service. He was formally awarded his DSC and Bar on 1 May 1947, in Auckland. On 16 April 1948, he was promoted to Commander in recognition of his distinguished war record and the especially good service [he] performed in the interest of the Royal New Zealand Naval Volunteer Reserve and placed on the Retired List of officers of the RNZNVR. Bunty Palmer passed away on 6 December, 1999.

John Young, A Dictionary of Ships of the Royal Navy of the Second World War, Cambridge: