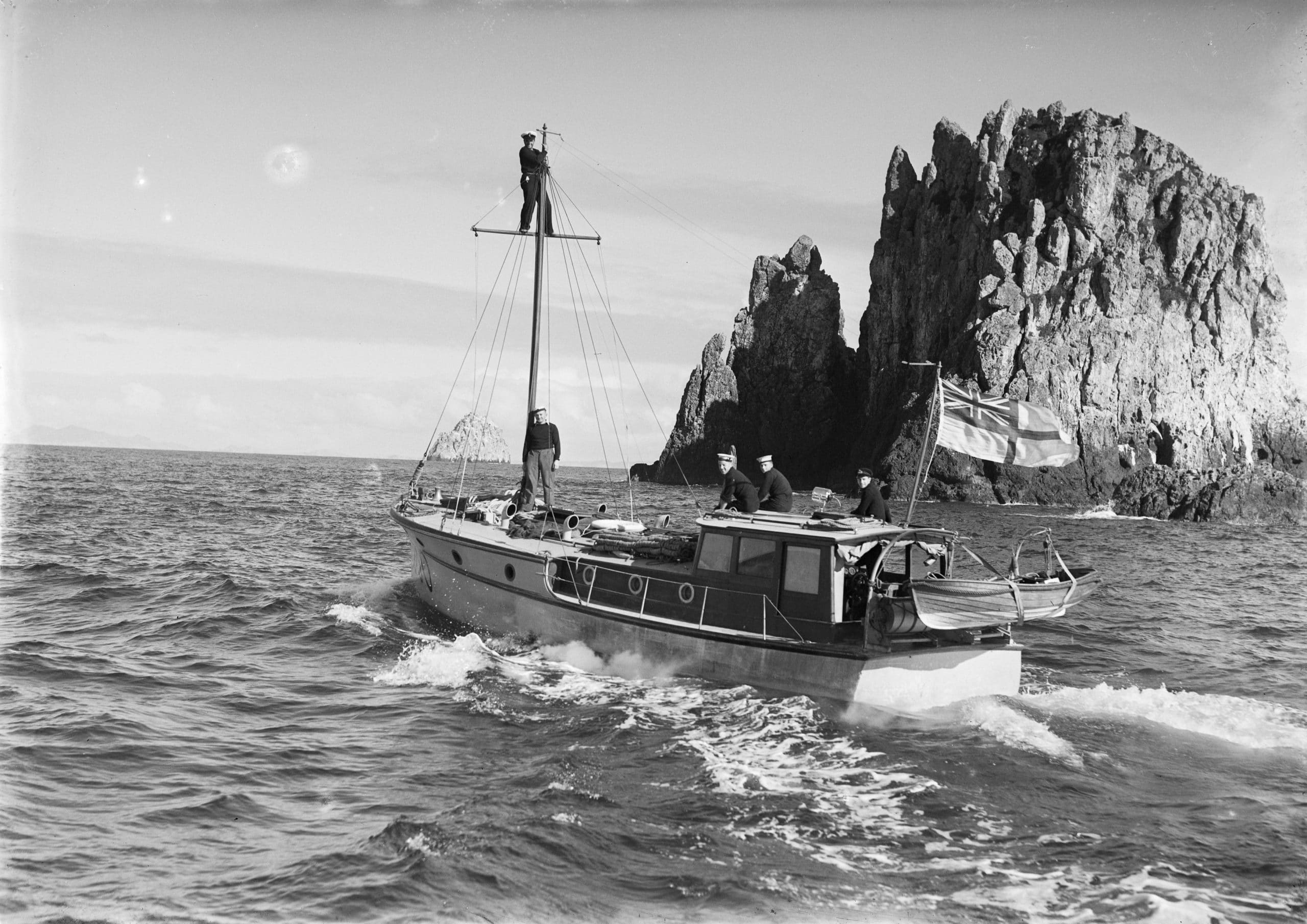 In early 1941, during the Second World War, an informal Emergency Patrol Service was created at Whangarei as the Waterfront Section of the Emergency Precautions Organisation. Read about NAPS organisation, duties and manning, full-time service and finally the closing down of the NAPS.

In early 1941, during the Second World War, an informal Emergency Patrol Service was created at Whangarei as the Waterfront Section of the Emergency Precautions Organisation.

Later on in 1941 owners of launches and yachts were asked to lend their boats for patrol services at the four main ports. This was formalised on 6 December 1941 when the War Cabinet approved the establishment of the Naval Auxiliary Patrol Service (commonly known as NAPS).[1]  The 1941 Naval Defence regulations authorised this service and allowed the informal patrols already working to be included in NAPS. As the boats were loaned to the government on a voluntary basis by their owners the boats were not formally commissioned into the Royal New Zealand Navy but were deemed to be part of New Zealand’s naval forces. NAPS was in essence, the naval version of the Home Guard to which it was affiliated.

At Auckland, Wellington, Lyttelton, and Dunedin an NAPS executive was elected from members of the local motorboat and yacht clubs. Enlistment was open to men over the age of sixteen years. For example the Dunedin division of the NAPS was based at Port Chalmers. The naval authorities provided fuel, naval stores & equipment, and issued modified naval uniforms. The government also pledged to pay the maintenance costs of the boats for ‘wear and tear’ or any accidents while in use. Training began in January 1942. Volunteers were given instruction in use of weapons, signalling, chart work and coastal navigation, ship identification, and enemy mines. At the same time the process began for taking up launches for use by the NAPS.  By March 1942 patrols were underway but it was not until June 1942 that the NAPS was fully operational. The Auckland and Whangarei craft worked as separate divisions of NAPS. Turnover of volunteers was quite high as men were taken into the armed services for duty both overseas and within New Zealand. This was because enlistment in the NAPS did not absolve a person from liability of service with the armed forces under the National Service Emergency Regulations 1940.[2] The objective of the service was to protect the harbours against enemy attack, particularly by small craft, spotting of mines deployed by parachutes, and search & rescue.[3]

The owners of the boats along with family member, friends, and volunteers formed the crews for the designated patrol craft. Naval rank was given to each volunteer and the owner-master of each boat was given the rank of Chief Petty Officer and their deputy Petty Officer.   Although the total number varied due to men being called up for active service the total number of volunteers was: Auckland, 180, Whangarei 84, Wellington 140, Lyttelton 68, and Dunedin 98 for a total of 570 men who served with the NAPS during its existence.[4]

At each port the Naval Officer in Charge (NOIC) allocated duties and set up the patrol roster.  The patrol began at sunset and finished at sunrise every night and covered the dock, wharves, inlets, and bays of each port. As can be imagined it was an arduous duty. Most craft were fitted with a Bren light machine gun on a stand forward.  During the day, boats were kept for emergency use. The crews were given a petrol ration so they could report for duty if needed. Waters in The Royal New Zealand Navy: Official History of New Zealand in the Second World War 1939-45 notes that ‘the members of NAPS showed keen interest and carried out their duties efficiently.’[5]

In order to supplement the numbers of launches that had been charted or purchased for regular navy work, craft based at Whangarei and Auckland were placed on full time service between 1942 and 1943 but remained on loan as a NAPS craft.  The crew would be paid and receive an allowance if they were called up to full-time service.

At first the duties assigned was the familiar patrol work. However, as the defensive minefields were laid around New Zealand to protect the ports, NAPS craft were used as tenders for the boom gate vessels, traffic control boats at the boom gates, examination vessels, and tenders to the minefields.  For example, the launch Oleo was taken up on a charter as a tender for the controlled minefield in the Bay of Islands in November 1942.

At Wellington the launch Volante was badly damaged in August 1942 and in November 1943 Lady Margaret II was also badly damaged.  On 4 December 1942 off Port Chalmers, Muratai collided with the Portobello ferry Tarewai and was very badly damaged. The records show it was returned to its owner along with a payment to cover repairs. Evidently it was repaired and returned to the NAPS.

Closing Down of the NAPS

In November 1943 there was a reassessment carried out on the usefulness of the NAPS. This came about due to the introduction of the Fairmiles and HDMLs to Wellington from late 1942 and to Auckland in June 1943 which reduced the need for NAPS craft.

The outcome was that most of the craft that had been taken into full-time service were retained by the naval authorities, while other craft were returned to their owners or kept on for limited duties. Whangarei’s division was disbanded on 27 October 1943 followed by Auckland on 6 December 1943.  The Lyttelton NAPS finished patrolling on 25 January 1944 and was formally disbanded on 23 February 1944. The Dunedin patrol ceased on 29 January 1944 and was formally disbanded on 19 March 1944. The craft were returned to the owners ‘on bloc’

The craft that were retained for full time service also were released from naval service. The Motukorea Channel examination patrol ended in January 1944. In late 1944 the RNZN took over the controlled mining bases and the boom traffic control.  At this time some of the craft were refitted before they were returned to their owners. However, some were sent back with a payment to cover the cost of refitting back to pleasure craft after war duty.[6]