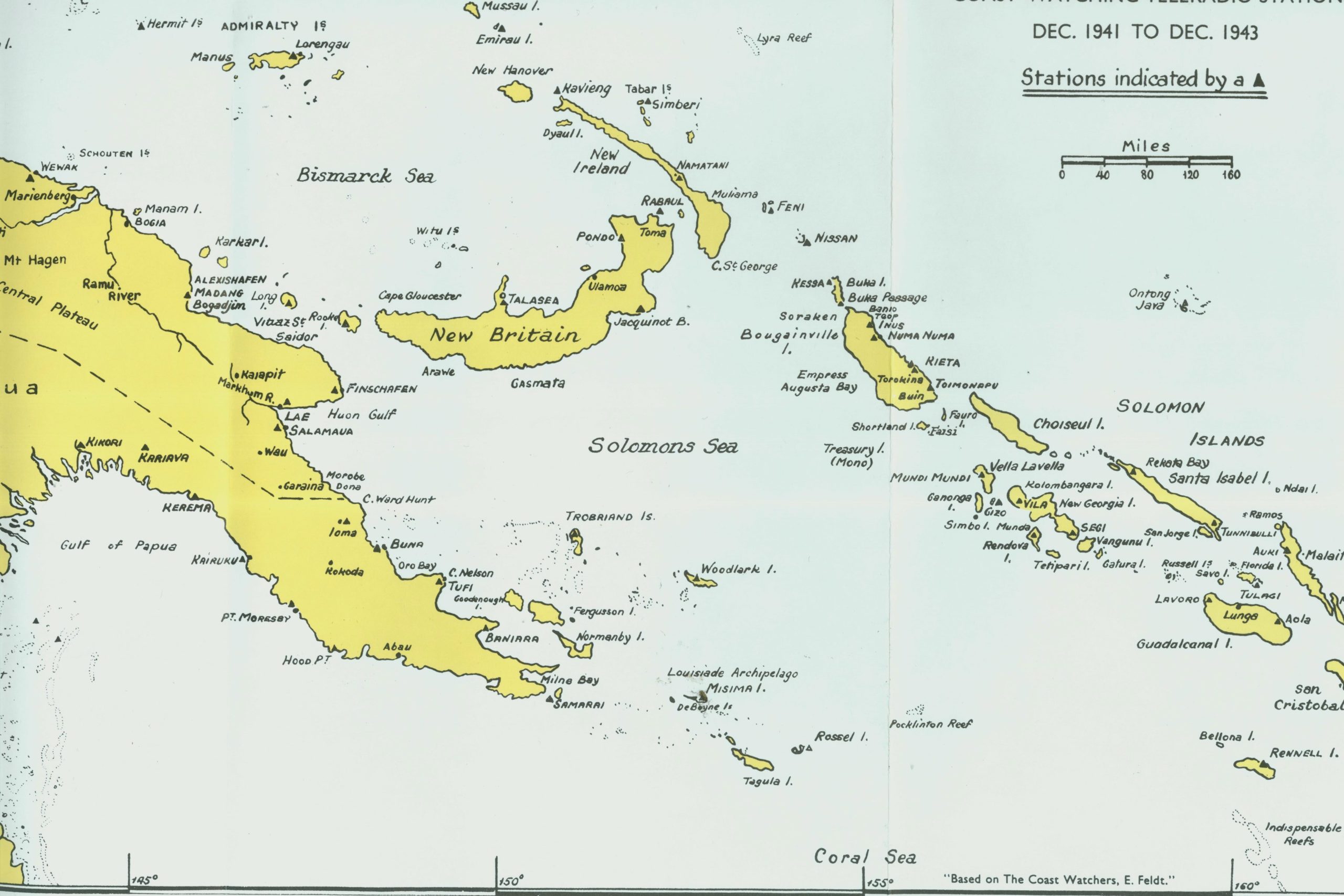 In 1929 the Navy had drawn up a scheme for maintaining a watch from the coasts of New Zealand, using the services of the Royal Naval Volunteer Reserve (NZ Division). In 1935 the scheme was modified to pass over the duty of actual coastwatching to trustworthy civilians who were to report to the District Naval Intelligence Officers in the four main cities, the whole organisation being under the operational control of the New Zealand Naval Board.

The duties of the coastwatcher are not spectacular. His role is passive or preventive rather than active and aggressive, but the information he obtains can be of vital importance. The commerce—raiding enemy at large in the Pacific is restricted in his activities because of a well-founded suspicion that a good coastwatching system has spread a wide net to catch him. He does not dare come within close distance of land, and even normally uninhabited islands may hide a trap specially set for his interception in the eyes and radio of a coastwatcher.

The coastwatchers duty is tedious. He has to spend long hours looking out over the inconstant but unchanging ocean or struggling with his radio, groping for contact with the outside world. He has to endure, perhaps to an exaggerated degree, all the monotony and boredom of service life without the compensation of a multitude of new friendships. It is only near a few main ports that he will have enough to do to keep healthily busy.

Coastwatching was carried on from our own coasts and those of New Zealand dependencies. Watch was also kept on those islands to the north and the south which might, in enemy hands, menace our security. Although the greater part of the coastwatching communications system was operated by New Zealanders, the actual watch for ships and aircraft on many Pacific islands was kept by local civilians and natives.

In 1929 the Navy had drawn up a scheme for maintaining a watch from the coasts of New Zealand, using the services of the Royal Naval Volunteer Reserve (NZ Division). In 1935 the scheme was modified to pass over the duty of actual coastwatching to trustworthy civilians who were to report to the District Naval Intelligence Officers in the four main cities, the whole organisation being under the operational control of the New Zealand Naval Board.

The scheme for the location and maintenance of coastwatching posts throughout New Zealand was further elaborated during 1938 and 1939, provision being made for 58 stations operating a 24 hour watch. On the outbreak of war the scheme was smoothly brought into action. In March 1940 there were 62 stations, manned by service and civilian personnel, at different points round the coast, many of them in out-of-the-way positions. In later years of the war the coastwatching organisation was several times modified. The number of stations fluctuated; some were abolished altogether and aerial patrols substituted. Stations were established in the Chatham Islands and also on Norfolk Island and the Kermadecs. By 1943 a number of radar stations had been established in New Zealand and on outlying islands.

These radar stations carried out duties analogous to coastwatching but by a different means. By 1944, 21 coastwatching stations were retained on a care and maintenance basis only; that is, they were left fully equipped and could be quickly manned and immediately used in an emergency.

The more important and accessible stations were linked to the Area Combined Headquarters by direct line telephone. Others, in the more remote positions, reported by radio.

Although operational control was centered in the Navy, the coastwatchers might be civilians or might belong to the Navy (at port war signal stations), the Air Force (at some radar stations), or the Army (at many coastwatching and some radar stations). The approaches to some ports were equipped with additional reporting devices which were directly controlled by the Navy. In spite of this diversity the system functioned efficiently, and the naval authorities were able to get rapid information of all shipping movements.