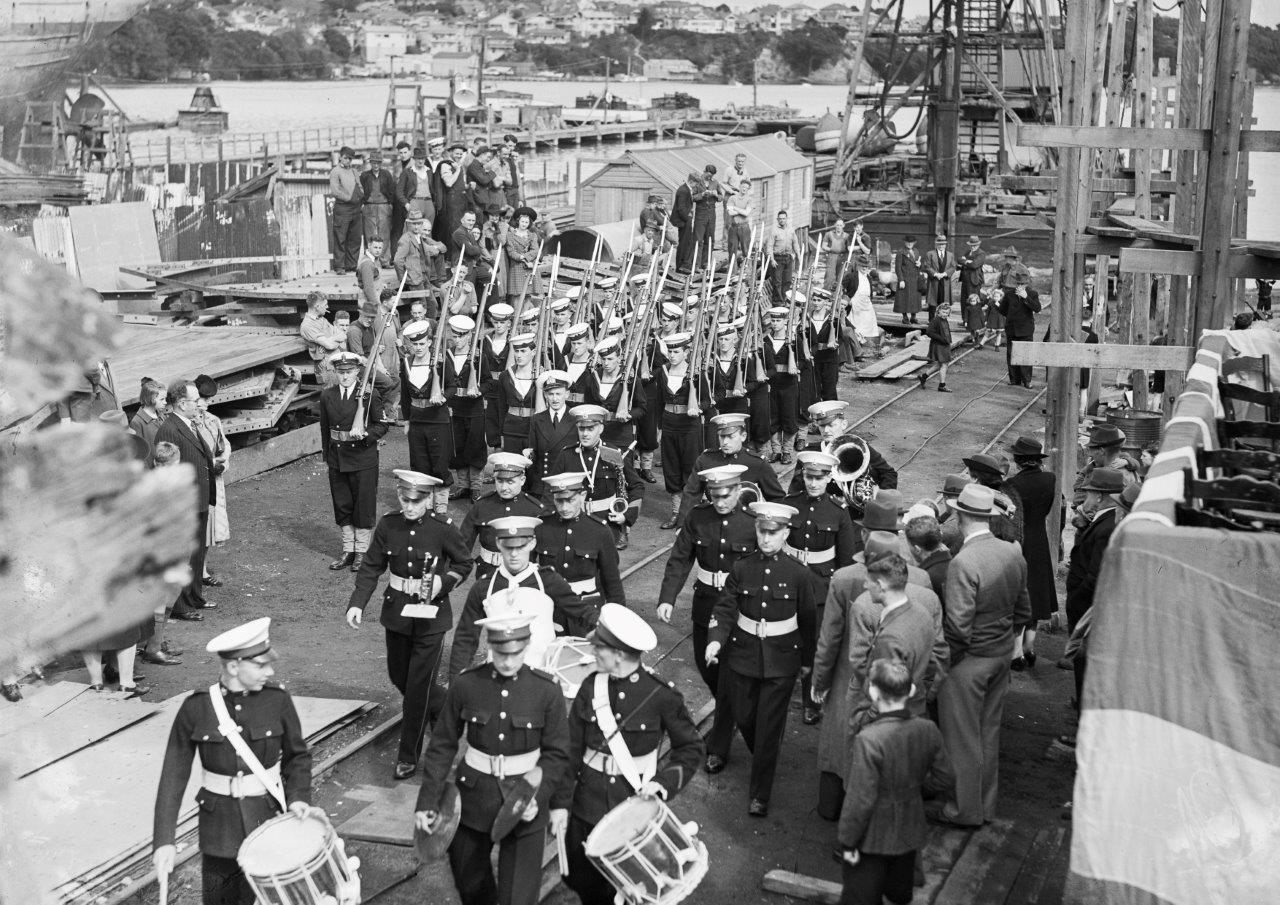 The Royal Marine band served with the RNZN for 36 years. A band first arrived for service with the New Zealand Division of the Royal Navy aboard the cruiser HMS Dunedin in 1924.

They had a band that came with the cruiser. But they also served the guns aboard the ship and formed landing parties. For example, Royal Marines went ashore in Western Samoa during the effort to suppress the Mau organisation from 1928 to 1930.

During the Napier earthquake in February 1931, the Royal Marines aboard the cruisers HMS Diomede and Dunedin went ashore for police duties in the destroyed town.

From the entry of Achilles and Leander into service with the NZ Division, there were two Royal Marine bands of twelve men each. By 1944 with the decommissioning of Leander from RNZN service and Achilles in refit, only Gambia had a band consisting of fifteen Royal Marines.

When Achilles re-entered service in 1944, she did not take on a band.

Post-1945 there was one Royal Marine detachment and band that served aboard the cruiser HMNZS Bellona that arrived in 1946 for service with the RNZN.

There were twelve men in the ship’s band under Bandmaster Marsh. Aboard Bellona, the band manned the transmitting station, other Marines manned two of the 5.25-inch turrets, and others carried out various wardroom and mess orderly duties.

While on the various deployments that Bellona undertook the band performed at concerts at the ports of call.  The entire Royal Marine detachment including the band also spent time ashore training with the Army.

In 1948 Bellona undertook a Pacific cruise accompanied by the Governor-General Sir Bernard Freyberg VC. In a letter after the cruise he complemented the band for the smart Guard of Honour that it performed.

The last detachment of Royal Marines arrived in 1949 for the final commission. Due to budget concerns it was not practical to maintain a Royal Marine presence in New Zealand.

They were farewelled in Auckland at the Royal Show at Epsom with the band leading the way including beating the retreat. Life on the Ocean Wave ended the concert that had been begun by Imperial Echoes. The detachment left on 27 November 1951 but the band remained in New Zealand to serve as the RNZN band.

The band would now serve the RNZN instead of a single ship. Duties included participating in a full scale version of The Mikado staged by HMNZS Irrirangi, concerts around New Zealand, and performances at the command of the Governor-General.

In 1953, the band participated in the presentation of the new Queen’s Colour at Philomel. During the Royal Tour of 1953-54, the band was posted to the cruiser HMNZS Black Prince that accompanied the Royal Yacht.

Later in 1954 the band again accompanied the Governor-General on a Pacific island cruise. When HMNZS Pukaki visited Waitangi for the celebrations the band was taken along.

In 1959 approval was given for the formation of the RNZN Band by the Naval Board to replace the Royal Marine Band when their New Zealand service ended.

On 20 March 1960 a service was held for the band at St Christopher’s on HMNZS Philomel. A plaque of the crest for Auckland City was presented to the bandmaster Lieutenant C.G. McLean.

The band was formally discharged from New Zealand service on 6 April 1960.