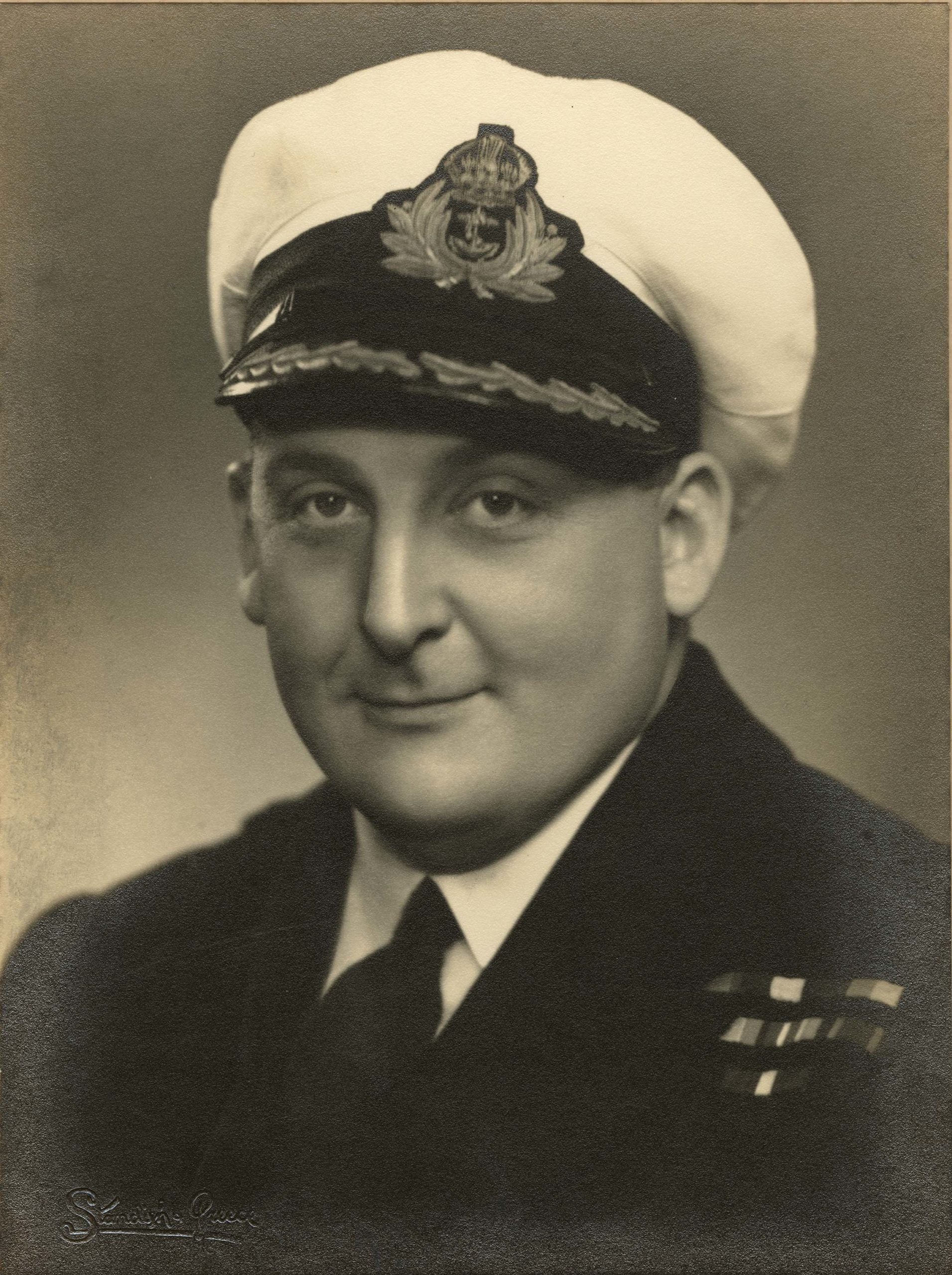 On the night of 31 January 1943 Kiwi and Moa were on patrol, with Lieutenant Commander Bridson as senior officer, when they encountered the Japanese Submarine I-1. For his expertise and perseverance in the sinking of this submarine, Gordon Bridson was made a Companion of the Distinguished Service Order and also received the United States Navy Cross.

On 21 November 1944 the Governor General, Sir Cyril Newall held the first public investiture in the South Island at the Dunedin Town Hall.[1]  One of those receiving decorations on that occasion was Commander Gordon Bridson, RNZNVR, who received the insignia of a companion of the Distinguished Service Order, the Distinguished Service Cross and the Volunteer Reserve Decoration.[2]  All signified his ability and leadership qualities in war.

Gordon Bridson was born on 2 December 1909 in Wellington.[3]  The family later moved to Auckland where Gordon attended Auckland Grammar School.[4]  Leaving school after the sixth form he worked for the family hardware business Duthie-Bridson,  subsequently known as John Duthie and Sons, Iron, Steel and Hardware merchants, as a sales representative.[5]  At this time he also joined the newly formed Auckland Division of the New Zealand Royal Naval Volunteer Reserve.[6]

The 18 year old fitted well with the Volunteer Reserve and was quickly promoted to commissioned rank, in 1928.[7]  Outside his work and naval activities Gordon was also very active in the sport of swimming.  In addition to success in local and national competitions he represented New Zealand in the sport, in Canada at the British Empire Games of 1930.[8] (Commonwealth) Games held in Hamilton, Canada in 1930 winning two silver medals in the 400yds and 1500yds freestyle. He also won fourteen New Zealand  titles  during 1929, 1930, 1931, 1932, holding all five freestyle titles over 100yds, 220yds, 440yds, 880yds and 1760yds in 1930 and 1931.  He also broke New Zealand records fourteen times.

At the outbreak of war in 1939 there was no immediate need for the majority of the Volunteer Reserve and he remained in his usual employment.  On 23 March 1940, perhaps with an eye on the war situation, he married Ada Gilchrist.[9]  The following month Gordon was mobilised and having been promoted to the rank of Lieutenant Commander, left with the first draft of Volunteer Reserve personnel for service with the Royal Navy in May 1940.

In England he was given command of HMS Walnut, a Tree-class minesweeping trawler. Ten of these vessels comprised the 24th and 25th Minesweeping/Anti-submarine Groups, all of which were commanded by New Zealanders.  During the next year the groups escorted convoys on the East Coast of Britain and through the English Channel.  Frequently subjected to attack from the air and surface Lieutenant Commander Bridson was awarded the DSC for his time in command of Walnut.[10]

Prior to the war New Zealand had decided to build three corvettes in Britain.  Their construction was delayed because of other war work, and the second, HMNZS Kiwi, was not ready until late 1941.  Having demonstrated his ability in Walnut, Gordon Bridson was appointed to command Kiwi.  After working-up, Kiwi escorted convoy ON52 across the Atlantic and then continued on to New Zealand.[11]

Grouped as the 25th Minesweeping Flotilla the three corvettes, Kiwi, Tui and Moa with HMNZS Matai deployed to the Solomon Islands in late 1942.  On the night of 31 January 1943 Kiwi and Moa were on patrol, with Lieutenant Commander Bridson as senior officer, when they encountered the Japanese Submarine I-1.  A sharp encounter followed with Kiwi conducting several depth charge attacks before the submarine surfaced to engage them with its gun.  I-1 was larger than the corvettes and was more heavily armed.  Nevertheless the corvettes continued the attack which ended when Kiwi rammed the submarine, sinking it.  For his expertise and perseverance in the sinking of this submarine, Gordon Bridson was made a Companion of the Distinguished Service Order and also received the United States Navy Cross.[12]

With Ada and their two children Gordon moved to Te Aroha and entered into a partnership of a hardware business.  In the late 1950s the family moved to a farm at Hora Hora, near Cambridge.  It was there, on 7 December 1972 that Gordon Bridson died, being survived by his wife Ada and three children Gordon, Gillian, and Peter.[14]

[3] Birth Certificate not available.  On joining RNVR his next of kin was W.J.Bridson – no other details of relations are shown in his personal file

[9] Marriage Certificate not available.  The speculation that Ada was the daughter of a Te Aroha solicitor is based on: the fact that Bridson gave his address for his war gratuity as C/- Gilchrist, son & Burns, solicitors, Te Aroha; that in April 1940 Ada’s address was given as Te Aroha on a next of kin form; and the fact that he bought into a business there.

[12] See Waters for a fuller account of this action

[14] Death Certificate not available.  Details from notification of death on Personal File and The Dominion 7 February 1972