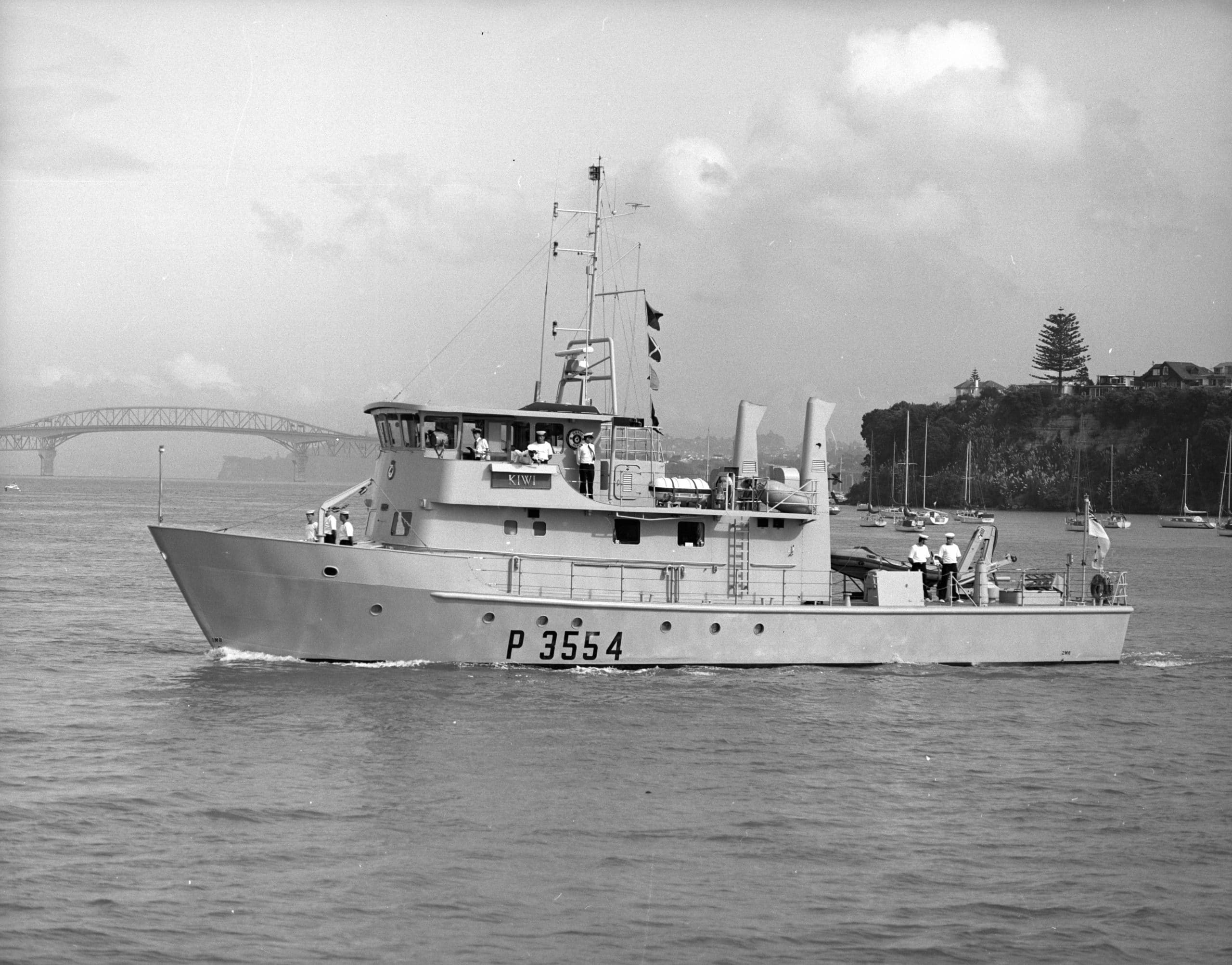 HMNZS Kiwi, the Inshore Patrol Craft attached to Canterbury’s Royal New Zealand Naval Volunteer reserve unit came into service in September 1984. The vessel’s main task was mine counter measures, for which it was fitted with sophisticated towed sonar.

Regularly sailing from Lyttelton on a Friday night with a crew of enthusiastic naval reservists to undertake a weekend’s training and returning on Sunday so they can be back at work on Monday morning, this vessel has carried out a wide variety of tasks over the years.  Commander David Bool was pleased to take responsibility for the new vessel in 1984, which was a significant advance on her predecessor, a wooden launch of Second World War vintage.  One of the crew at that time, then Chief Petty Officer Bryan Shankland, who later rose to the rank of Commander and the officer in charge of the Reserve unit.

The name Kiwi apart from being uniquely New Zealand has strong connections within our navy – it was the name of another small ship which played a key role in the battle for the Solomon Islands during the Second World War.  On the night of 29 January 1943 His Majesty’s New Zealand Ships Kiwi and Moa were on patrol off the island of Guadalcanal.  The battle for the island was in full tilt and the Japanese nightly tried to land supplies and reinforcements for their men ashore fighting the Americans.

At about 9.00 pm Kiwi detected a submarine and ran in for an attack.  Depth charges were dropped on the submarine which could actually be seen underwater because of the bioluminescence.  The depth charges forced it to the surface and the two ships began a gun battle with a submarine of much greater size than themselves and one which had heavier guns.  Eventually Kiwi was able to ram the submarine three times, causing it to retreat from the battle.  Two hours after the battle first began I-1 (as the submarine was later identified) ran aground on a reef and was wrecked.

A memorial dedicated to the wartime Kiwi has been erected in Victoria Park, and a memorial service is to be held there during the course of the Anniversary weekend.

Coinciding with the delivery of the second Kiwi, was a restructure of the role of New Zealand’s Volunteer Reserves and the new ship was to be central to the sea-going activities of the Canterbury unit.  The vessel’s main task is mine counter measures, for which it is fitted with sophisticated towed sonar.

In common with all Navy Ships, Kiwi has been involved in a variety of tasks, beyond its primary role.  Search and rescue operations are regular, one further a field than normal was locating a plane that had crashed in Foveaux Strait.  Providing assistance to the Fisheries and Customs Departments is also a common function, while the ship’s sonar was involved in the search for Ben Smart and Olivia Hope in Marlborough Sounds.

Kiwi was involved in ceremonial duties, including the annual Seafarer’s Service held in Timaru and the Waitangi Day celebrations at Okains Bay. Kiwi was also open to the public during port days at Lyttleton, and at Akaroa. She was decommissioned in April 2006.