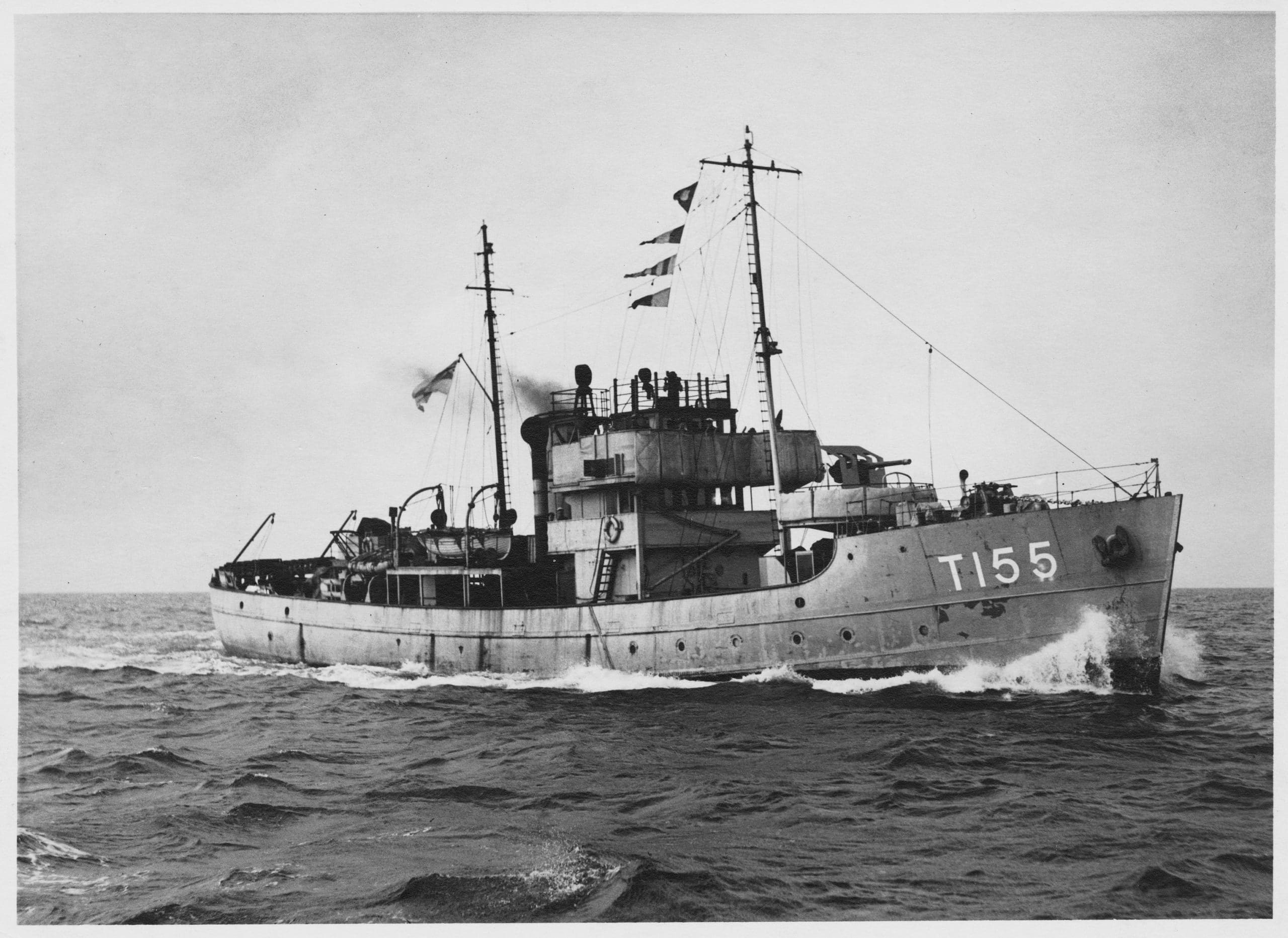 Inchkeith was one of the first warships to be commissioned into the Royal New Zealand Navy after the awarding of the title that was effective 1 October 1941. From October 1942 to June 1943 Inchkeith and her sister ships were employed on anti-submarine patrols while supply ships were discharging at Norfolk Island.

Inchkeith was one of the first warships to be commissioned into the Royal New Zealand Navy after the awarding of the title that was effective 1 October 1941. It was named after the Scottish island in the Firth of Forth.

The Isles-class minesweepers were a group of vessels based on the Admiralty designed Anti-submarine and Minesweeping trawler HMS Bassett that was commissioned in 1935.  Other groups of similar design include the Tree-class minesweepers in which many New Zealand RNZNVR officers served in during the Second World War.  The Isles-class purpose was for training rather than active operations. In April 1941, the Admiralty offered four Isles-class vessels to the New Zealand government which accepted it in July as part of the recommendations that there by nineteen vessels for minesweeping and anti-submarines duties in New Zealand’s home waters.[3] The government paid £65,000 each for the four vessels that were commissioned as Inchkeith, Sanda, Killegray, and Scarba.[4]

Inchkeith was completed in October 1941 and commissioned into service with the RNZN under the command of Lieutenant-Commander H.A. Dunnet RNR a New Zealander who would serve as her commanding officer until 1943.[5] The majority of the ship’s companies were New Zealanders. The initial workup of the four vessels was carried out in Scottish waters and the vessel conducted escort work around the coast.  On 15 March 1942 Inchkeith collided with an ocean boarding vessel HMS Marsdale, damaging some of her superstructure. In fact the Isles-class ships in RNZN service seem to have had a reputation for accidents and collisions.

On 15 March 1942, Inchkeith, the other three vessels and the Bird-class corvette HMNZS Tui left Greenock and joined a Canada-bound convoy [ONS76] as escorts. From Canada the ships sailed down the eastern coast of the United States and arrived at Bermuda were Inchkeith and Killegray was repaired during a 12-day stay.[6] After spending four days in Jamaica, the fleet passed through the Panama Canal and arrived at the USN naval base at San Pedro, California on 25 May 1942. There the fleet acted as an anti-submarine escort a USN fleet of ten tankers to Pearl Harbour arriving on 22 June 1942.[7] The ships departed on 6 July, less HMZNS Killegray which had boiler trouble, and arrived in Suva on 24 July.

On the leg from Suva to Auckland, HMNZS Sanda ran out of coal which was poor quality and Inchkeith took her under tow from 1 August and then handed over to HMNZS Muritai two days later. Inchkeith arrived at Devonport Naval Base [HMNZS Philomel] on 4 August 1942.  She underwent a refit and was deployed for minesweeping duties from September 1942 with the 7th Trawler Group. The area of operations for the group included the Hauraki Gulf and the Bay of Islands. In 1944 the group consisted of the four Isles-class trawlers.[8]

This work continued for the duration of the war. In January 1945, perhaps returning the favour, HMNZS Sanda took fourteen hours to tow Inchkeith from Whangaparapara Harbour, Great Barrier Island back to HMNZS Philomel.  From March to October 1945 the 7th Trawler Group undertook clear-sweeping of the Hauraki Gulf minefields. Even though after five years it was thought probable that the mines would have being lost or sunk. However, it was essential that the approaches to the Waitemata Harbour and Hauraki Gulf be totally free of mines. By May 1945, no mines had been swept.  When detailed information was received from the Admiralty where the mines laid by the German raider Orion in 1940, a further sweep was undertaken but no mines were located. In October 1945, shortages of coal forced the ships into lay-up until February 1946 when the corvettes HMNZS Arabis and Arbutus were fitted out as minesweepers and four Isles-class ships including Inchkeith were paid off to reserve.[10]

Inchkeith remained in reserve at the dockyard until the RNZN declared it surplus in 1957. All four Isles-class ships were sold en bloc to G A Sparrey in August 1958 for scrapping.  The ships were broken up at the Lighter Basin in Freemans Bay, Auckland in 1959.