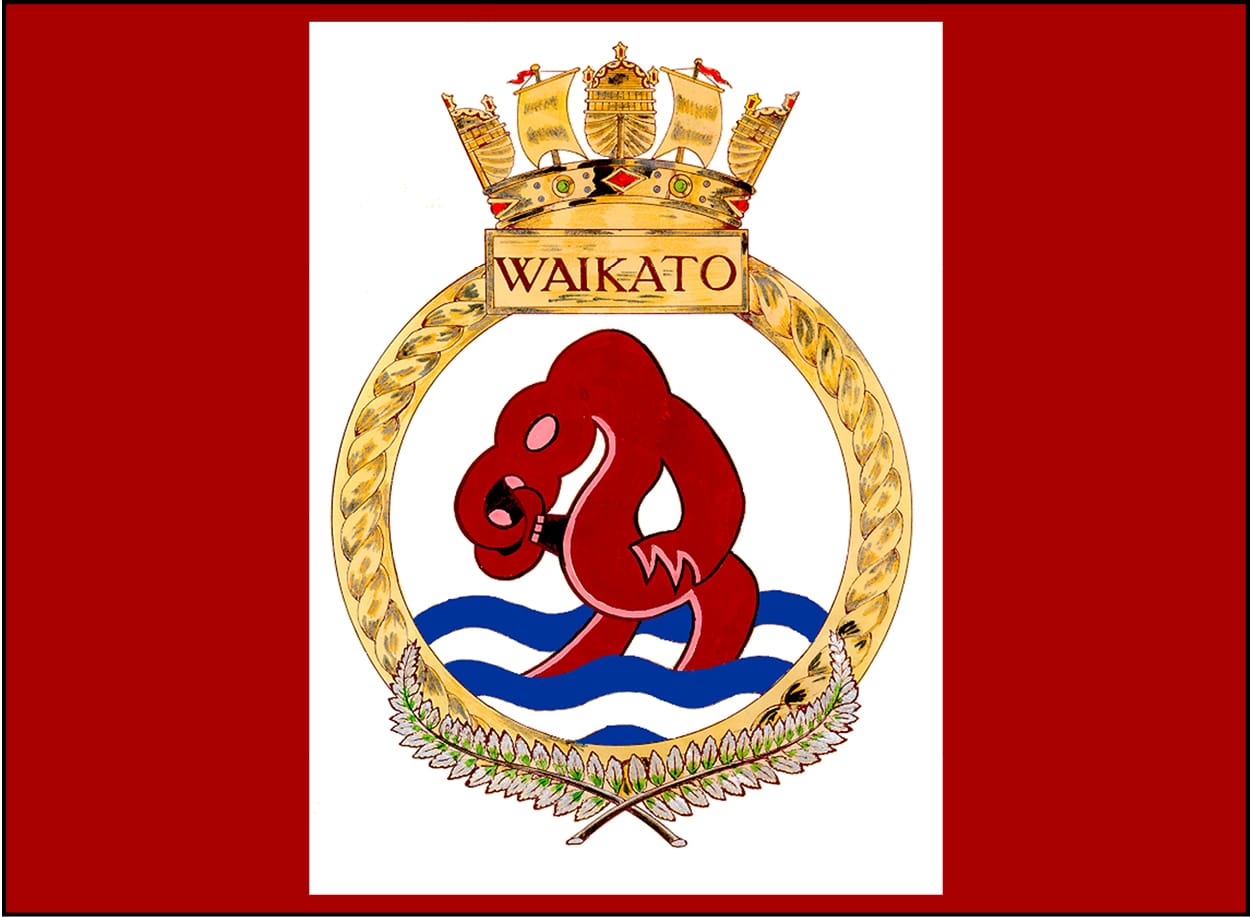 By October 1918, Charles ffoulkes had been appointed as the Admiralty Adviser on Heraldry to the Ship’s Badges Committee.  The committee meet in December 1918 and the first Order was promulgated.

This order regulated Battle Honours, Badges, and Mottos. The Admiralty would be the final arbiter of design and battle honours to be displayed.

All ships in the fleet had to submit a return to the Admiralty identifying  which badges, honours and mottos were in current use.

A further order instructed that in future there would be a carved board mounted for display on the Quarterdeck which would show the badge, honours and motto.  In essence, this was the naval equivalent of a Regimental Colour.

The design of badges had to include the following elements:

The shape of the badge was determined by type of vessel:

The shape distinction was maintained until 1940, when for the duration of hostilities it was directed that the circular frame was to be used for all classes of ships.

This appears to have been primarily an economy measure as considerable work was incurred recasting badges when a new ship, of a different class, assumed the name of an earlier ship.

In an amending order, ships were allowed to wear a different shaped badge, should one for an earlier ship of the name be available.

Until the end of 1941 and, to some extent beyond, the badges of New Zealand ships were determined by the Royal Navy Ships Badges Committee, as the ships acquired came to New Zealand from the Royal Navy, complete with badges.

The first New Zealand badge was that of HMS Tamaki proposed in 1940 and generally approved in New Zealand, although the Admiralty was consulted because of the use of Royal Navy heraldry, in the rope and crown surround.

The amendment to the regulations governing the shape of badges seems to have been overlooked as the approved badge was diamond shaped, although the surround has subsequently been changed this was the only badge approved in the Royal New Zealand Navy during the war.

Post-1945, the NZ Naval Board decided that all ships in commission would have a badge.

The Commanding Officers would be asked to submit a design.

This would be approved locally but sent to the College of Heralds in London, to complete the final drawing and for this to be approved by the Admiralty Ship’s Badges Committee.

There would be debate over some of the badges selected but the Naval Board’s decision would remain, although in some cases suggestions were taken up and the badge changed.

The frigates HMNZS Otago & Taranaki had their badges designed by a competition while other badges were designed by civilians so the policy of having the CO select a design was not rigidly applied.

The last badge to be submitted to the College of Heralds was for HMNZS Waikato.

There was some robust debate about the design and the cost of reviewing the badges had increased substantially.

Having decided that badges would no longer be registered with the College of Heralds, those for HMNZS Canterbury and Monowai were approved in New Zealand, by the Chief of Naval Staff.

There the matter lapsed as it was not until the 1980s that there was again a requirement to develop a procedure for the design and approval of ships badges.

It was agreed in February 1983, that the procedure would be for approval to be given by the Chief of Naval Staff, but that the New Zealand Herald at Arms, Extraordinary, would be consulted for advice on heraldic accuracy.

The procedure was revised again in 1994, with the establishment of a Ships Names and Badges Committee.

This provided for the badges to be approved by the Chief of Naval Staff and for the New Zealand Herald at Arms to be consulted.

Originally, the badges were intended to follow the general concept of those of the Royal Navy, utilizing the crown and rope surround.

By 1949, however, a separate national identity had begun to develop and some badges had been produced with green fern leaves added to the surround.

At the same time it was noticed that the Royal Canadian Navy had developed a frame for its ships badges with a cluster of maple leaves at the base.

Sir Arthur Cochrane was approached to produce a similar distinctive surround for the badges of the Royal New Zealand Navy, to which he consented.

The resultant design was for two silver fern leaves to be added to the bottom of the ropework.

Although his proposal appears to have received general approval and widespread use, it would seem that it was not until 1953 that the New Zealand surround was formally approved by the Naval Board.

At that time it was stated that the colours of the surround for HMNZ Ships badges was to be:

Although not mentioned in the official policy statement, it has become customary for the jewels in the crown to be coloured. These are:

To date only one ship has been granted a variation to this colour scheme, HMNZS Canterbury which has the ship’s name in black on a red ground; although the reason does not appear to have been documented it is probably more than coincidence that these are the Canterbury provincial rugby colours.

The Royal New Zealand Navy has until recently followed the Royal Navy system and allocation of Battle Honours, the most recent being awarded for the Korean War. There has however been a change away from accepting ships’ names from the Royal Navy and automatically taking the Battle Honours. In this respect HMNZS Canterbury is a hybrid, whereby the Royal Navy Battle Honours were accepted for use by the ship but the badge was not.

A motto is usually selected by the Commanding Officer of a ship and once approved it is then retained for the life of the ship.

In the case of HMNZS Te Kaha and Te Mana, however, the mottos were seen to be integral with the ships’ names and were chosen by the Chief of Naval Staff.

The Official Badge of the Royal New Zealand Navy

The Official Badge of the Royal New Zealand Navy is one of the later badges of the Navy, the design only being evolved because of a request for a replica by the Minister of Defence.

When the decorations were being planned for the coronation route in London n 1953, it was decided to include badges of the Commonwealth navies along this route.

No further thought seems to have been given to the provision of a Badge for the New Zealand Navy until September 1965, when the Minister of Defence asked each of the three services to supply a replica of their official badges for his Ministerial Office.

As the Navy had no badge the Hydrographic Branch was requested to design a badge and Mr E.W. Jones accordingly produced a design which was accepted by the Naval Board.

This featured a fouled anchor within a garter, bearing the words “Royal New Zealand Navy” with fern leaves below.

When this badge was subsequently publicised in early 1966, the Secretary for Marine drew attention to its similarity to the Statutory Seal of the Marine Department; the Naval Board saw no real difficulty in the situation, and indeed, had already used the badge on several occasions.

However, in order to clarify the situation the Naval Board decided to approach the Royal College of Heralds in London, for their advice. Sir Anthony Wagner, KCVO, D.Litt, Garter Principal King of Arms replied that as the College of Heralds had been consulted by neither the RNZN nor the Marine Department in the design of their badges, he could not help.

A further approach was then made to the College of Heralds with a view to producing a distinctive badge for the Royal New Zealand Navy, based on that already in use.

The Garter King of Arms agreed to help and in July 1968 forwarded a design for the approval of the Board.

Included in the correspondence was a statement to the use of the garter, an emblem distinctive to the Order of the Garter and used outside that context only by the heraldically illiterate.

The design submitted was not at all to the liking of the Naval Board and again the Hydrographic Branch was asked to assist. Mr Jones produced a revised design which was forwarded to the College of Heralds.

After some discussion the revised design was refined and submitted to the Queen for approval. Her Majesty, the Queen gave royal assent to the Official Badge of the Royal New Zealand Navy in November 1969.