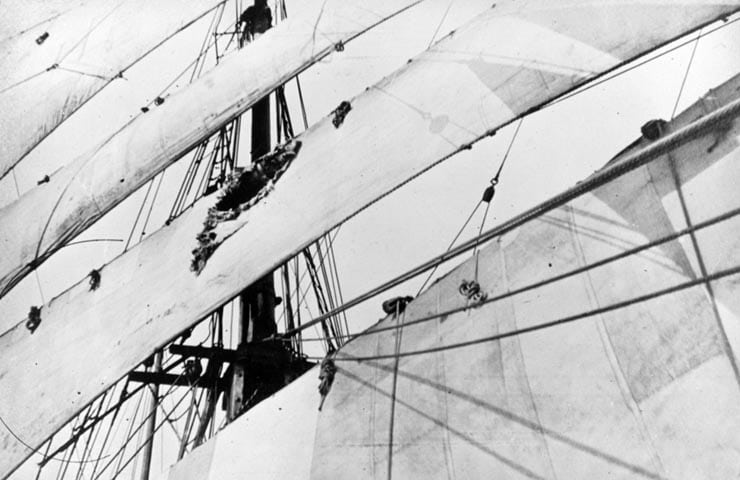 HMS Prize after action against U93

HMS First Prize was so named because it was the first prize taken by the Royal Navy on the outbreak of World War One.

Taken into naval service in late 1916 and converted into a Q-Ship, or Submarine Decoy Ship. Under the command of a New Zealander, Lieutenant Commander William Sanders RNR.

Prize as the ship was later known, engaged three submarines with Sanders being awarded the Victoria Cross for the first.

He was also made a member of the Distinguished Service Order for the second action and tragically lost his life along with all his officers and ship’s company in the third encounter.

Some hours after war having been declared on 4 August 1914 the German topsail schooner Else was in the English Channel on passage from Rio de Janiero to Falmouth, Cornwall, with a cargo of hides, when it was intercepted and taken as a prize of war by the old second class cruiser HMS Diana.

A month later the Else was sold by auction to the Marine and Navigation Company, who’s sold director was Mr (later Sir) Michael Garthwaite, who renamed the ship First Prize.

The Else had been built by Messers E.V. Smitt and Zoon of Westerbrook, Groningen, in the Netherlands, in 1901.

It was 37.33m (122 ft 6 in) in length and displaced 277 tons with an iron and steel hull. By co-incidence the Else’s sister ship, the Johanna, was captured a few days after Else and also taken to Falmouth.

It had been Mr Garthwaite’s intention to use the vessel for the coastal trade around Britain, but his had not come about before he was informed that the Admiralty wished to take the vessel for ‘special purposes’.

As a man in his 40s Mr Garthwaite was too old to be in uniform, but he immediately placed the First Prize at the disposal of the Admiralty at no cost and to fit the ship with a motor and man it, even offering to serve in her himself.

The former offer was accepted but he was politely informed that the matter of fitting-out the ship and his personal services would not be required.

After being taken into service First Prize was taken to Ponsharden, upstream from Falmouth for conversion to a submarine decoy ship, or Q-Ship as they were known.

There two 50hp motors were installed as was a radio. The ship was also armed with two 12 pounder guns, a Lewis gun and a Maxim machine gun.

To hide the guns the forward 12 pounder was inside a collapsible deck house and the after one on a disappearing mounting below the hatchway covers of the after hold.

With the conversion completed First Prize sailed to its new base at Milford Haven in south Wales.

There the ship was stored and final maintenance undertaken. On 5 February 1917 while still in dockyard hands the ship’s new Commanding Officer, Acting Lieutenant Commander William Sanders RNR joined the ship.

He was a New Zealander from Auckland who had been at sea since he was aged 16 and was now the youngest officer to command a Q-Ship.

The other three officers and the ship’s company of 23 ratings joined soon after.

On Wednesday 25 April 1917 Lieutenant Commander Sanders formally commissioned HMS First Prize into the Royal Navy and early the next morning the ship sailed on its first patrol.

The ship’s patrol area was to the south of Ireland and First Prize gradually made ground, under sail, in that direction. The weather was fine and there was the opportunity to practice the routine required on meeting a submarine.

Four days later, on the evening of 30 April this occurred. U93 was sighted and as the submarine closed it opened fire with both guns and the ‘panic’ party manned the boat and pulled away from First Prize.

Once the submarine was in range First Prize opened fire and scored hits on the submarine, blowing its captain and two others over the side.

The submarine was seen to settle and was believed to have sunk, an opinion that was shared by its captain who was rescued by First Prize’s boat.

First Prize had been heavily damaged in the action and was fortunate to be able to return to base.

Described as the classic Q-Ship action, Lieutenant Commander Sanders was awarded the Victoria Cross and all of his men were also decorated.

Three weeks later, the damage from the action with U93 having been repaired, HMS Prize as the ship was now known, was on patrol again.

On 12 June UC75 was sighted and approached Prize, firing as it closed. When in range Prize too opened fire but the submarine was able to submerge and escape, taking with it a description of Prize.

Once more repaired Prize was again on patrol in early August, with the British submarine D6, when it encountered UB48 on the afternoon of 13 August.

The submarine closed Prize, firing as it did so and again, when in range Prize opened fire. Again the submarine escaped, but this time remained in the vicinity.

About midnight, witnessed by D6 which was on the surface recharging its batteries, a torpedo slammed into Prize and the ship disintegrated in a terrific explosion. There were no survivors.

When he was advised of the loss of his ship, Mr Garthwaite not only declined to seek recompense, but immediately offered to provide another ship as a replacement. This patriotic gesture was declined.