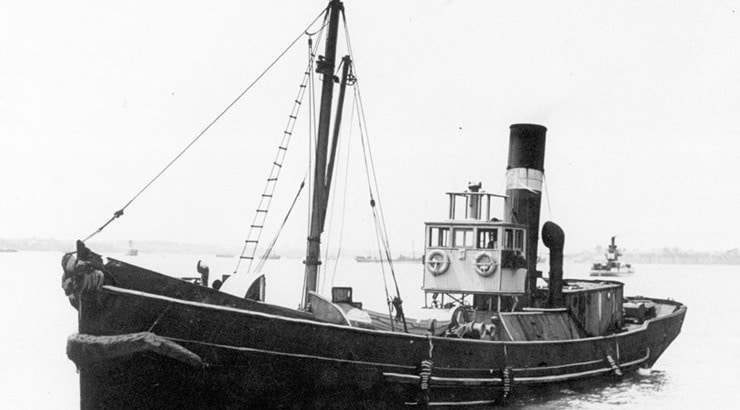 When the necessity to deal with German mines laid off the coast arose a small organisation had to be developed, the requisite equipment found and the expertise learned.

This home-grown force was able to satisfactorily sweep the two minefields laid by the raider SMS Wolf such that when a check sweep was made by Royal Navy minesweepers after the war, no further mines were swept.

In early 1915, the Naval Intelligence Officer formally advised the Government of the possibility of mines being laid around the coast, urging that a minesweeping flotilla be formed.

The Chief of General Staff, however, considered this to be unnecessary and the associated expense unwarranted.

Accordingly nothing further was done over the next two years.

Within days of the return of HMS Philomel in 1917, Captain Hall-Thompson concluded that the greatest danger was from enemy mines.

By the end of October, it had been ascertained that there were only four suitable vessels in the country and that essential equipment and personnel were lacking.

The equipment issue was solved by ordering some from England and manufacturing some in New Zealand.

In respect of personnel it was acknowledged that the normal crews of the trawlers would have to be utilised, but that for the purposes of naval discipline, the masters should be given a temporary status in the New Zealand Branch of the Royal Naval Reserve.

They were later recognised as having been members of the New Zealand Naval Auxiliary Service.

At the end of November, it was agreed that the two most powerful vessels available be taken up as soon as possible and fitted out for minesweeping.

Captain Hall-Thompson contacted the Auckland City Council, the owners of the Simplon one of the trawlers and learned that this would cost about £200 per week.  He thought that as the other vessel, the Nora Niven was a larger vessel its cost would be about £250 per week.

Negotiations were opened with the two owners and agreement was quickly reached with the New Zealand Trawling and Fish Supply Company of Napier, the owners of the Nora Niven.

Agreement with the Auckland City Council, owners of the Simplon, proved more difficult, the price and conditions asked being considerably more than those earlier proposed.

The Minister was not prepared to accept the conditions demanded by the Council and in the interim the vessel was commandeered while the monetary matters were negotiated.

Under the conditions of the Charter it was agreed that: the vessel would be fitted-out by the Crown; the charter rate would be £32 per 24 hour period; the charter was to be for one year, but could be suspended at 24 hours notice when not required; the Master was to be provided at all times with a full crew of nine men; a bonus of 10% of the normal wages paid would be reimbursed by the Crown; the Crown indemnified the crew; and the crown undertook liability for the vessel for £10,000.

For Simplon the conditions were generally the same, except that the value of the vessel was £6,000.

Simplon was a problem throughout.  Captain Freeland had to be relieved of his command at the end of May 1918, subsequently being awarded compensation, apparently for mental strain and a nervous breakdown.

On 26 March the departure of the vessels from Wellington was delayed because of trouble in getting all of the Simplon’s crew on board.

On 20 May, Simplonwas in Auckland, due to sail to rendezvous with the Nora Niven.  It was not ready and the departure of the ships had to be delayed, with the hire of the Nora Niven having to be paid because that vessel was ready, as ordered.

Again in September there was a delay in operations because the Simplon was not ready and in October the vessel was waiting for four days for a crew.

To reliably sweep the northern field required a special ‘Aceton’ type sweep because of the depth of water.

One was acquired from Britain to be fitted in the Government steamer Tutanekai, but crew problems resulted in it being fitted in a small whaling vessel, the Hananui II.

This was owned by Messers Jagger and Hardy of Auckland and a Charter Agreement, similar to those for the other two vessels was drawn up.

Unlike the other vessels, there were no naval personnel on board for sweeping operations, probably because of a lack of suitable personnel in Philomel.

Hananui II began operations in the latter part of February 1919.

Having swept the field without finding any mines it returned to Auckland at the end of April, landing the minesweeping equipment at Devonport and was returned to its owners.

The Nora Niven was returned to her owners on 17 May 1919, with little fuss.

In keeping with its character during the charter, the return of the Simplon was more complicated.

A hint had been made in March when the Council advised that as a result of exploding mines, the boiler had shifted on its mountings.

The list of items submitted by the Council to restore the ship to its previous condition was described by the Surveyor of Ships from the Marine Department:

He [the Owners Representative] practically wanted a new ship made of an old one, and I regret to say that he did not display a very patriotic attitude in the matter.

Hard negotiations followed and it was agreed that the Charter would conclude on 22 May, provided that the necessary work to restore the vessel was completed by 7 June.

The matter of the boiler surprised the Marine Department Surveyor and he invited the Owner’s Surveyor and the Chief Engineer to go under the boiler with him, resulting in agreement that the boiler had not shifted.