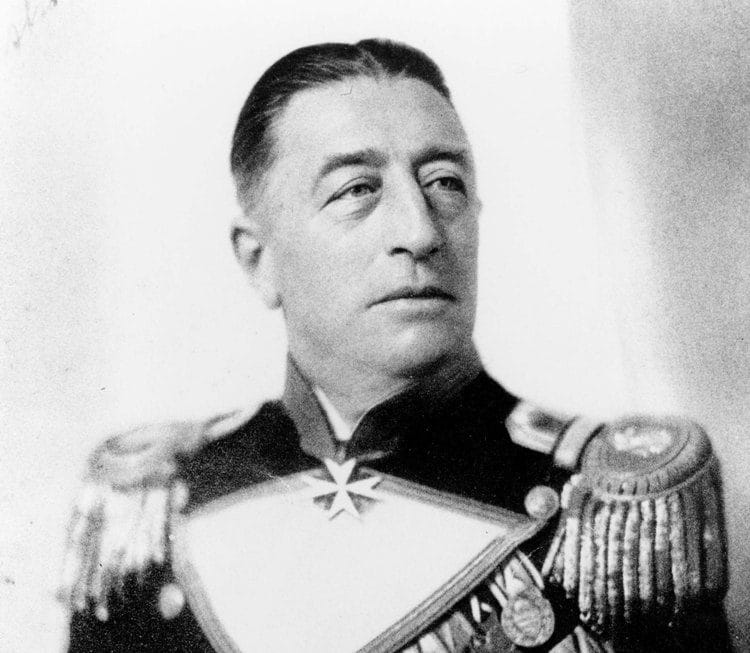 Count Felix von Luckner was a colourful, charismatic and enigmatic character, who left an indelible mark upon New Zealand society.

He came to New Zealand as a prisoner of war after his ship SMS Seeadler was wrecked in the Society Islands and made a daring but unsuccessful escape from Motuihe Island.

In 1938 he visited New Zealand, being acclaimed as an honourable foe.

Felix Von Luckner was born into an aristocratic German military family in Dresden on 9 June 1881.  His family expectations were for him to become a cavalry officer, but instead he wanted to go to sea.

He joined a Russian sailing ship in 1894 for Australia where he left it and spending the next seven years in a wide variety of occupations.

At the age of 20 he returned to Germany and entered the Lubeck Navigation College from which he gained his Mate’s Certificate and joined the Hamburg Line and also the German Naval Reserve.

In 1907 he qualified for his Master’s Certificate at the Papenburg Nautical College. In February 1910 he entered the Imperial German Navy and in 1913 joined the gunboat SMS Panther on the West African Station.

In 1914 he joined the new battleship SMS Kronprinz in which he served in the Battle of Jutland.

Von Luckner was given command of the auxiliary cruiser SMS Seeadler, a sailing vessel and in December 1916 embarked on a commerce raiding expedition.

During the next four months he managed to evade the strenuous efforts of the Royal Navy to hunt him down and sank fourteen allied merchant ships with only one loss of life to crew.

In April 1917 Seeadler rounded Cape Horn and after small successes and running low on supplies headed for Mopelia Island, one of the Society Group, where it drifted onto a coral reef on 2 August.

The crew managed to strip the ship of all its salvageable equipment and with their 46 prisoners, set up camp ashore.

Von Luckner then decided to take five men in one of the two ship’s boats, he named Cecille, with the aim of reaching Fiji, by way of the Cook Islands to capture a vessel and return to pick up the remainder of the men.

Cecille made Atiu, 800 miles (1,600km) away where they passed themselves off as Americans of Dutch descent and the New Zealand Resident gave them sufficient supplies to make Aitutaki.

The New Zealand Resident there was suspicious of these ‘Norwegians’ as they claimed to be, but had no means of detaining them.

Von Luckner then sailed for Fiji, 1,000 miles (2,000km) away. He made the island of Wakaya but with his party, was arrested by the police on 21 September and imprisoned in Suva Jail.

From there they were taken to New Zealand as prisoners of war in October.

Their arrival in New Zealand provoked a hostile public reaction as it was thought that the Seeadler had sunk the passenger steamer Wairuna and imprisoned her passengers and crew when in fact it was the responsibility of the Wolf, another German raider.

Initially they were held at mining base in Torpedo Bay in Devonport until November 1917 when von Luckner, his second-in-command Karl Kircheiss and with one rating as their steward, were taken to Motuihe Island in the Hauraki Gulf, which also housed interned German nationals.

The other three seamen were sent to Soames Island in Wellington Harbour.

On Motuihe, Kircheiss made a sextant and as ‘props’ for a Christmas Concert two German naval ensigns were made, one out of a bed-sheet and another from a flour sack.

The telephone line to the Island was tapped and careful preparations made for an escape, including eight merchant navy cadets being entered into the Imperial Navy.

The Commandant of Motuihe had a personal launch, the Pearl, which was maintained by the internees, two of whom also manned it. On the night of 13 December 1917 von Luckner, Kircheiss and the cadets cut the telephone line, stole the Pearl and headed out into the Hauraki Gulf.

Von Luckner first made for the Mercury Islands to capture a sea-going vessel and then proceed to the Kermadec Islands where he would raid the castaway depot to obtain supplies before heading back to Mopelia.

Off the Mercury’s he found two scows, but could only capture one, the Moa. The other, the Rangi, headed for shore to report the incident.

With the escape of the prisoners now known and the report from the Rangi, the cable ship Iris, fitted with two 6 pounder guns and Army crews, sailed to intercept the Moa.

At 11.20am on 21 December Iris sighted Moa and was soon in a position to fire a shot across the bow of the scow and von Luckner was again a prisoner of war.

After twenty-one days in Mt. Eden Prison von Luckner and Kircheiss were sent to Fort Jervois on Ripapa Island in Lyttelton harbour. Subsequently they were transferred back to Motuihe.

Although the armistice came into effect on 11 November 1918, it was not until 14 May 1919 that von Luckner, with his men and 300 other Germans embarked in the Willochra for repatriation to Germany.

After the war von Luckner embarked on the lecture circuit and several books were published about his exploits in Seeadler, in which he gained the nickname “Sea Devil”.

In the mid-1930s with the assistance of Hitler and the Nazi Government he embarked on a voyage around the world in his yacht Seeteufal, the ‘Sea Devil’, to spread a message of German friendship and goodwill.

Arriving in New Zealand in 1938 he was greeted with acclaim as a gallant and honourable foe, but also with suspicion.

View a gallery of images and artefacts related to von Luckner.