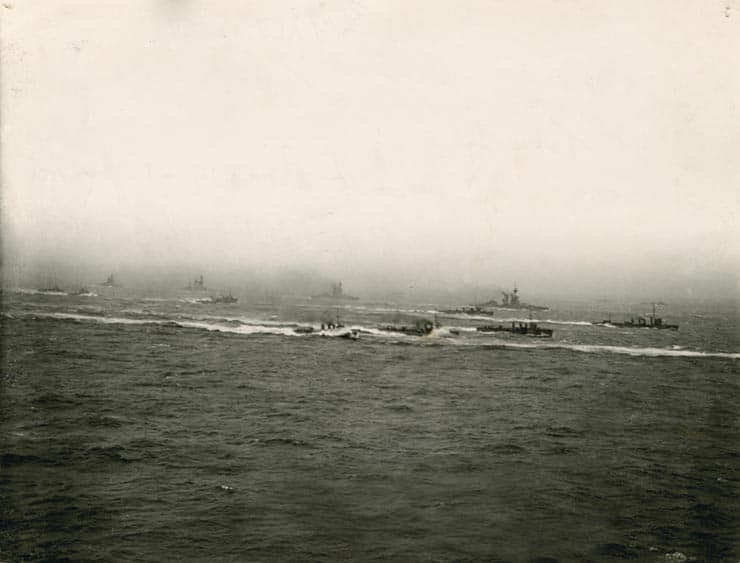 The battle of Jutland was the only major clash between the British Grand Fleet and the German High Seas Fleet.

It occurred in the southern North Sea, off the coast of the Jutland Peninsula which gives its name to the battle.

While the British lost more ships than the Germans, it was the pivotal naval battle of the First World War.

Whilst the High Seas Fleet emerged twice more into the North Sea, there was no other major battle and the Royal Navy retained command of the sea, without which Germany could not win the war.

In May 1916, the commanders of both the Highs Seas Fleet and the Grand Fleet had planned offensive operations to draw the other out.

Both plans included the use of aircraft and submarines. The German plan was the most advanced and because of the endurance of the submarines involved, it had to be completed by the end of May, however by the 30th the weather precluded the use of zeppelins and a modified plan was implemented.

The British with the advantage of intelligence from its code-breaking section in Room 40 of the Admiralty were aware that the High Seas Fleet was putting to sea on 30 May.

Admiral Jellicoe in command of the Grand Fleet was informed and ordered Admiral Beatty to take the Battle Cruiser Fleet to sea from Rosyth and sailed himself with the Grand Fleet from Scapa Flow.

Admiral Hipper took the German battle cruisers to sea at 1.00am on 31 May, with the intention of drawing out the British battle cruisers, which he would then lead into a trap with the High Seas Fleet under Admiral Sheer.

The first contact between the two fleets was accidental. At about 2.10pm the British cruiser Galatea went to investigate a lone merchant ship and sighted two German destroyers investigating the same ship, which proved to be a neutral Danish vessel and signalled “Enemy in sight”.

This brought the two opposing battle cruiser forces into action by 3.45pm. Again faulty signalling by Beatty meant that the powerful 5th Battle Squadron could not immediately join the action.

Hipper turned to the south to draw the British towards the High Seas Fleet and Beatty closed the range with fire being opened at about 15,000 yards.

In a repeat of the signalling fiasco at Dogger Bank, the second German ship in the line, Derfflinger, was left unengaged for ten minutes.

Beatty’s flagship, Lion, was hit several times, but at 4.02pm three shells from von der Tann hit Indefatigable which caused it to pull out of line and two further hits resulted in a terrific explosion and the ship disappeared.

The battle continued and at 4.26pm Queen Mary took a full salvo of four 11 inch shells from Seydlitz, suffering a massive explosion and quickly broke apart.

New Zealand, the next astern steamed past the spot, debris landing on its decks.

It was at this point that Beatty uttered one the most quoted statements about Jutland “There seems to be something wrong with our bloody ships today.”

Admiral Hipper had achieved his task and drawn the British battle cruisers towards the High Seas Fleet.

When it was sighted, Beatty similarly turned away to draw the High Seas Fleet towards Jellicoe and the Grand Fleet, which has famously become known as the “sixteen point turn at Jutland”.

Again signalling was a problem. The 5th Battle Squadron was just coming into action and could not see the flag signals from Lion and Beatty had not signalled Jellicoe of the sighting of the High Seas Fleet.

Nevertheless, as the ships now steamed north, the battle continued, with the heavy guns of the 5th Battle Squadron causing much damage to the German battle cruisers.

By 6.00pm Jellicoe was only 8½ miles from the battle but could only see gun flashes – none of his forces had told him where the Germans were.

At this time the 3rd Battle Cruiser Squadron had been detached to join Beatty and encountered the cruisers and destroyers of the High Seas Fleet in the progress of attempting a torpedo attack on the Grand Fleet.

The heavy guns of the battle cruisers forestalled this attack.

Continuing on, by a stroke of luck he was able to join the Battle Cruiser Fleet and provide a distinct shock to Admiral Hipper.

At the start of the afternoon there had been five British battle cruisers and he had sunk two, but now there were six!

The newcomers pressed home the attack, coming under fire not just from the battered German battle cruisers, but also from the leading German battle ships.

At 6.33pm Invincible received several hits in succession and like Indefatigable and Queen Mary, disappeared in a blinding explosion.

Now the Grand Fleet was in range and opened fire on the German ships. Admiral Sheer was aware of his predicament and turned away.

The visibility by now was patchy and deteriorating. Jellicoe was between Sheer and Germany and had all intentions of renewing the engagement the following day.

However, during the night, following a series of unsatisfactory incidents and a complete lack of communication Admiral Sheer was able to take his fleet between the rear of the British line and make it safely back into Harbour.

German losses in the battle were less than the British, but strategically, the German Fleet only ventured to sea on two further occasions before the end of the war.

Jutland was a battle that the British did not have to win, but if the Germans had won, they would have gained command of the sea and would have won the war.