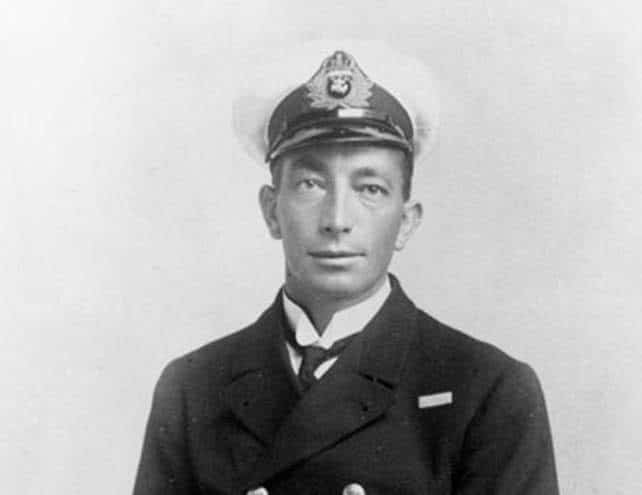 Lieutenant Commander William Edward Sanders VC, DSO is the only New Zealander to date, to win the Victoria Cross in a naval action.

This was awarded for the engagement between HMS Prize and the German submarine U 93 on 30 April 1917.

In 1897, he was apprenticed to a mercer, but by 1899 was a cabin boy on the small coastal steamer Kapanui. By 1910 he had passed for third mate, having seen service on several ships, both sail and steam.

In 1914 Billy was mate of the barque Joseph Craig engaged in the trans-Tasman timber trade, when that ship was wrecked off Hokianga in August 1914.

Billy then signed on the Moeraki for Sydney where he passed his extra Master’s Certificate with honours and also his Compass Adjuster Certificate.

Returning to Wellington he applied to join the Royal Naval Reserve, but was not immediately mobilised and instead joined the troopship Willochra and later the Tofua, as third mate, completing three round trips to the Middle East and England.

In England on his last voyage in the Willochra Billy enlisted the aid of the High Commissioner to obtain a commission in the Royal Naval Reserve, in which he lowered his age by four years.

After returning to New Zealand from his last troopship voyage Billy joined the tramp steamer Hebburn Jan in Wellington in December 1915, bound for Britain.

The ship arrived in Glasgow in April 1916 and Billy immediately reported to the Admiralty.

He was granted a commission as a Temporary Sub Lieutenant on 22 April, his date of birth being noted as 7 April 1887.

He was immediately posted to HMS Excellent in Portsmouth for a six week gunnery course.

From Excellent, Billy was appointed to HMS Sabrina II the depot ship for the patrol force at Milfordhaven, for “Special Service”.

The term “Special Service” covered the existence of Q-Ships or submarine decoy ships, the concept of which was that they were designed to look like merchant ships, but had concealed guns.

When a submarine was sighted the crew would appear to panic and abandon ship, leaving a small party on board.

Once the submarine was close enough, usually approaching while firing on the ship, the guns would be un-masked and they would sink the submarine.

Billy’s first Q-Ship was HMS Helgoland which he joined in August, with the rank of Acting Lieutenant. Helgoland was a brigantine and was in the last stages of being converted to a Q-Ship.

Billy was second in command of the ship and also gunnery officer. Helogland sailed for the first time as a Q-Ship after dark on 6 September and at 1.30pm the next day sighted a submarine.

On 5 February 1917 Billy took command of HMS First Prize, a topsail schooner so named because as the German Else, it had been the first ship taken as a prize on the outbreak of war.

When he joined the ship it was still being fitted out, which included the installation of two auxiliary engines and two 12 pounder guns.

Billy was promoted to Acting Lieutenant Commander and First Prize sailed on its first patrol on 25 April, having been commissioned earlier in the day.

The submarine was about 2 miles (4km) away and altered course towards First Prize, opening fire.

The ‘panic party’ abandoned ship while the remainder kept to their stations, out of sight.

Shells hit the ship and some near the waterline, put one engine out of action and caused water to pour in.

At 9.05pm U 93 was 80 yards (73m) away and within the arcs of fire of the ship’s guns. Billy gave the order to open fire and a hit was immediately scored on the submarine’s after gun.

The damage from this blew the U Boat’s captain over the side, while another hit on the conning tower caused the submarine to begin to submerge.

Sanders tried to close the range which by now was about 500 to 600 yards (approx. 500m) but the second engine gave out.

The ship continued to fire, scoring more hits and the submarine settled by the stern. The panic party then rescued three members of the U Boat’s crew, including the Captain.

With the submarine sunk all attention was now given to saving the ship. In this one of the Germans, a mechanic, actively assisted in getting one engine started and under full sail and the engine First Prize made for the Irish Coast.

This was described as the classic Q-Ship action and for this Billy was awarded the Victoria Cross and all other officers and ship’s company were also decorated. Following this action the ship’s name was altered to simply “Prize”.

The irony of this action was that although U 93 was seen to be hit and settle by the stern, it did not actually sink.

Although badly damaged the First Lieutenant was able to successfully get the boat back to Germany and with it a description of Prize.

Repairs having been completed Prize was on patrol again three weeks later. On 12 June UC 75 was encountered.

During the inevitable shelling one shell exploded near Billy, blowing him across the deck and inflicting two wounds on his forearm.

Prize opened fire, but at long range and the engagement was inconclusive. However, again a description of the Q-Ship was obtained by the Germans.

For this action Billy was made a member of the Distinguished Service Order, but was not alive when the award was made.

Other uneventful patrols followed, one in mid-July causing his investiture by the King of his Victoria Cross to be postponed.

The strain was now beginning to tell and on 3 August Billy asked to be relieved, but before this could occur there was another patrol to be undertaken.

For this patrol Prize left Milfordhaven with the British submarine D6 in tow. Once the patrol area was reached the tow was released and the submarine was free to manoeuvre.

On the afternoon of 13 August UB 48 was sighted and began to close Prize and opened fire. D6 attempted to get into an attacking position but without success.

In the meantime Prize opened fire and believed at least one hit had been achieved. This proved to be on the signal mast of the submarine, which then remained submerged. Leutnant zur See Wolfgang Steinbauer was not going to let Prize escape.

About midnight he fired two torpedoes, one of which struck Prize and caused a terrific explosion. All on board were lost.

After he was awarded the Victoria Cross the officers of HMS Prize gave him a presentation sword and this was given to his sister by the Governor General in June 1918.

On the same occasion his Victoria Cross and Distinguished Service Order were presented to his father.

Today Billy is remembered by the Sanders Scholarship at Auckland University, the Sanders Cup for sailing and a memorial in Sanders Avenue in North Shore City.

His medals, sword and other items are in the Auckland War Memorial Museum. A replica of his Victoria Cross and other memorabilia are on display at the Navy Museum.