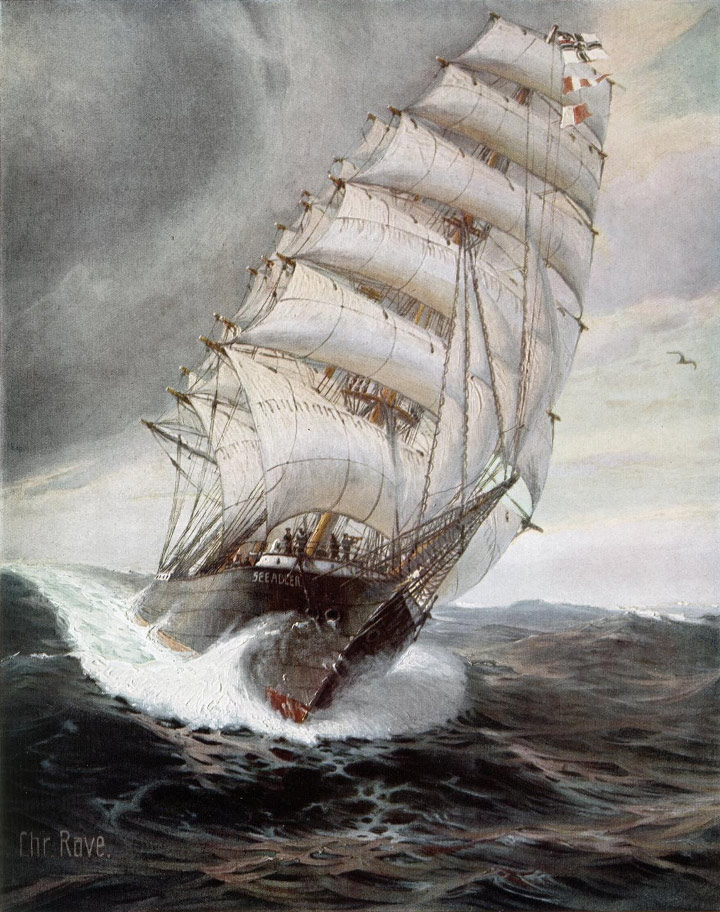 SMS Seeadler was a German raider under the command of Kapitän Leutnant Felix von Luckner.

After a successful cruise in the Atlantic von Luckner moved to the Pacific and his ship was wrecked on Mopeilia, one of the Society Islands group, in 1917.

Von Luckner and five others attempted to capture a ship to rescue his stranded men, but they were themselves captured and sent to New Zealand as prisoners of war.

On 24 July 1915 the United States steel hulled, full rigged ship the Pass of Balmaha, owned by the Harris-Irby Cotton Company of Boston was intercepted by U36 and sent as a prize to Cuxhaven.

This was the second time that the ship had been taken by one of the WWI belligerents.

It had first been intercepted by the Armed Merchant Cruiser HMS Victorian on 21 July when en-route to Archangel with a cargo of wool.

The boarding officer was not happy with the ship’s papers and Victorian’s Captain ordered the ship to proceed to Kirkwall, in the Orkney Islands for a full inspection, placing one officer and six marines on board as a prize crew.

The United States Ensign was also replaced with the Royal Navy White Ensign.

Three days later the ship was intercepted again, this time by U36.

Although the Captain of the Pass of Balmaha struck the White Ensign and hoisted the United States flag and locked the prize officer and the marines below decks, it was not enough.

U36 took the ship as a prize, if for no other reason than it was bound for a port in a belligerent nation (Russia) with a cargo of war supplies.

At Cuxhaven the British became prisoners of war and the Americans were released, but the ship was taken by the German Government.

It was decided that the ship would be fitted out as an auxiliary cruiser to operate against British merchant shipping. It was fitted with an auxiliary engine, accommodation for additional crew and two 105mm guns and two machine guns were mounted.

For its raider role the ship was renamed SMS Seeadler (sea eagle) and placed under the command of Kapitän Leutnant Felix von Graf von Luckner.

With all preparations complete Seeadlersailed on 21 December 1916, with its first challenge being to slip through the British blockade.

On Christmas Day, when southeast of Iceland, Seeadler, disguised as a Norwegian ship, was stopped and boarded by the Armed Merchant Cruiser HMS Avenger.

However von Luckner and several of his crew could speak Norwegian and their deception worked.

Out in the Atlantic two weeks later, on 9 January, the Gladys Royle became Seeadler’s first victim.

The Lundy Island followed the next day and the French barque the Charles Gounod on 21 January.

On 24 January it was the turn of the Canadian schooner Perce and on 3 February the French ship Antonin, followed soon afterwards by the Italian Buenos Ayres.

The British steamer Pinamore was met and captured on 19 February. This was a vessel in which von Luckner had sailed earlier in his career. It was sent into Rio de Janiero for supplies and on return was sunk.

More ships were captured and sunk over the next few weeks, the British Yeoman, the French Le Rochefoucauld and the Dupleix and the British Horngarth.

Having captured nine ships, Seeadler now had on board over 300 prisoners. This was resolved on 20 March when the French Cambronne was taken.

Having taken down the topmasts and topsails von Luckner placed the prisoners on board, in charge of one of the British captains and cleared the area as quickly as possible.

This was the time that von Luckner decided to move into the Pacific Ocean.

Having learned that the United States had entered the war the Americans R.C. Sladeand A.B. Johnson were Seeadler’s next victims.

It was now July 1917 and Seeadler had been at sea for seven months and required some essential maintenance. Seeking a remote island von Luckner chose the island of Mopelia in the Society Group, off which the ship anchored on 31 July.

Unfortunately, on the 2 August the ship dragged its anchor and drifted on to the coral reef off the island.

With his crew and prisoners safely ashore and the ship stripped of valuables and equipment, von Luckner decided to take the navigator and four crewmen in one of the ship’s boats in an attempt to capture another ship, in which to return to Germany.

The party eventually reached one of the Fijian islands but were captured and taken to New Zealand as prisoners of war.

Despite a well-planned, but unsuccessful escape attempt they remained prisoners of war until 1919.

The remainder of the crew captured a Chilean schooner which called at the Island in September and made Easter Island where they were interned and taken to the mainland.