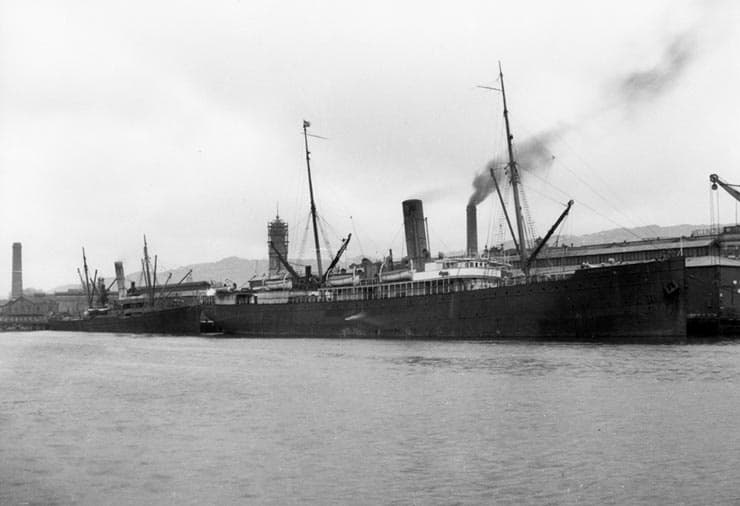 At the start of World War One the New Zealand Government chartered a number of merchant ships and converted them for troop carrying.

Once a war has been entered into there is a requirement to get troops into the field, and this is most commonly done by sea, certainly in the First World War.

This was a continual requirement throughout the war, with 111 charters being made.

The dangers experienced by troopships were highlighted when a British transport was sunk in 1915. Those lost included ten New Zealand Army Nurses.

Some ships were chartered frequently, while some only did one voyage.

The first two ships chartered were the SS Moeraki and the SS Maunganui to take the force which occupied German Samoa.

This was followed soon afterwards by charters of ten ships to transport the troops of the main body of the New Zealand Expeditionary Force which landed them in Egypt.

Regular charters then continued until the end of the war.

The ships belonged to a variety of companies as can be seen in the ten vessels chartered for the main body.

The Maunganui and Tahiti belonged to the Union Steamship Company (New Zealand). The Arawa, Athenic and Waimana to the Shaw Savill and Albion Company (Britain).

The ships were manned by their civilian officers and ratings, the distinction given to them was a button-hole badge which declared that they were serving on New Zealand Transports.

Once the charter was in place the ship was converted for troop carrying, much of this work being carried out at Port Chalmers.

The charter agreement included the Government paying a sum that covered all the operations of the vessel while it was on transport service and also the reinstatement of the ship on completion of the charter.

In addition to the payment for the charter the Government also paid for war risk insurance arranged by the British Board of Trade.

Each return voyage was one charter, of which there were essentially 111, the troopship number being the number of the charter.

Thus most ships had more than one transport number, for example the SS Tahiti had seven, beginning with No. 4 for its carriage of the Main Body in September 1914 to No. 107 in July 1918, when it carried part of the 40th reinforcements.

Besides these 111 charters a few ships were chartered for carriage of troops to Australia where they transhipped to Australian transports, but were not given a New Zealand transport number.

In the beginning, the Government also had to ‘protect’ the officers and ratings on behalf of the owners while the ship was under charter.

This was the case as in August 1914, the Admiralty had intended to remove those men serving in the transports who were members of the Royal Naval Reserve when the ships arrived in England.

In the event the Admiralty were dissuaded from this action on application from the New Zealand Government, on the basis that they could not be replaced.

On board each transport there was a small naval detachment under a naval officer designated as the Transport Officer.

The naval ratings were mainly for signal duties.

Safety of the ship and its most valuable cargo was of key importance to the Government, which was well aware of the risks that were taken each time a ship entered the active war zone around Britain and the Mediterranean.

By 1917, orders were issued for the troops embarked to assist in keeping a watch for submarines and action to be taken in the event that one was sighted.

Earlier, in mid-1916 the Government was alarmed to find that most of the troopships did not carry sufficient life boats/rafts, nor lifebelts for the crew and the troops embarked.

The response was immediate. The two transports then enroute to England, the Maunganui and Tahiti were ordered to be equipped with additional rafts on arrival in Durban and arrangements made for all future departures from New Zealand to be adequately equipped.

Although no New Zealand transport was sunk during the war, the reality of the dangers faced were brought home forcibly in October 1915.

On 19 October the British transport HMT Marquette sailed from Alexandria for Salonika. Also on board was No.1 New Zealand Stationary Hospital, the staff of which included 36 New Zealand Army nurses.

Amongst the 167 people that were lost were 31 New Zealanders, including 10 of the nurses.

In early 1918 the Imperial Government began negotiations to take over the New Zealand troopships, which at that time consisted of the Mokoia, Ulimaroa, Tofua, Tahiti, Maunganui and Willochra.

This absolved the New Zealand Government from the necessity to charter ships, replacing the cost at a fixed rate per head, which was the same as that paid by the Australian Government.

It also transferred the cost of reinstating the ships to the British Government.

The proposal was agreed by New Zealand in early April and the transfers began shortly thereafter.