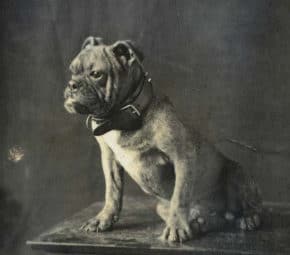 Pelorus Jack the bulldog first joined HMS New Zealand on 4 February 1913 as a puppy, prior to the ship’s world cruise of that year.

He was donated to the ship by a New Zealander, a Mr Pomeroy, who was living in England at the time.

During the cruise he was presented with two silver dog collars (one is now in the Auckland Museum and the other is in our collection).

Pelorus Jack had an accident just after he joined the ship which broke a lot of his teeth whilst playing with a wooden deck block.

Jack was present during two naval actions, in 1914 and 1915. He died, it is said, when he fell down the forward funnel and was burnt to death.

His successor as Jack had requested in his will, was to be a “bull pup of honest parentage, clean habits and moral tendencies” also named Pelorus Jack.

It was Jack’s wish that “no Dachshund or other dog of Teutonic extraction be permitted on board HMS New Zealand except as rations for his successor”.

Pelorus Jack II joined the Navy on 29 February 1916, and was present when the ship was at the Battle of Jutland and after this he was gun shy, bolting for his life every time the guns fired.

When the ship visited New Zealand in 1919, Captain Leggett donated Jack to the people of New Zealand under the watchful eye of Mr and Mrs Pearson of Auckland.

Jack was landed along with his possessions (silver dog collars etc) to quarantine for six months before being allowed to his new home.

It is unclear as to what happened, but Jack was found dead during his last week at the quarantine station, so sadly never actually made it to his new home.