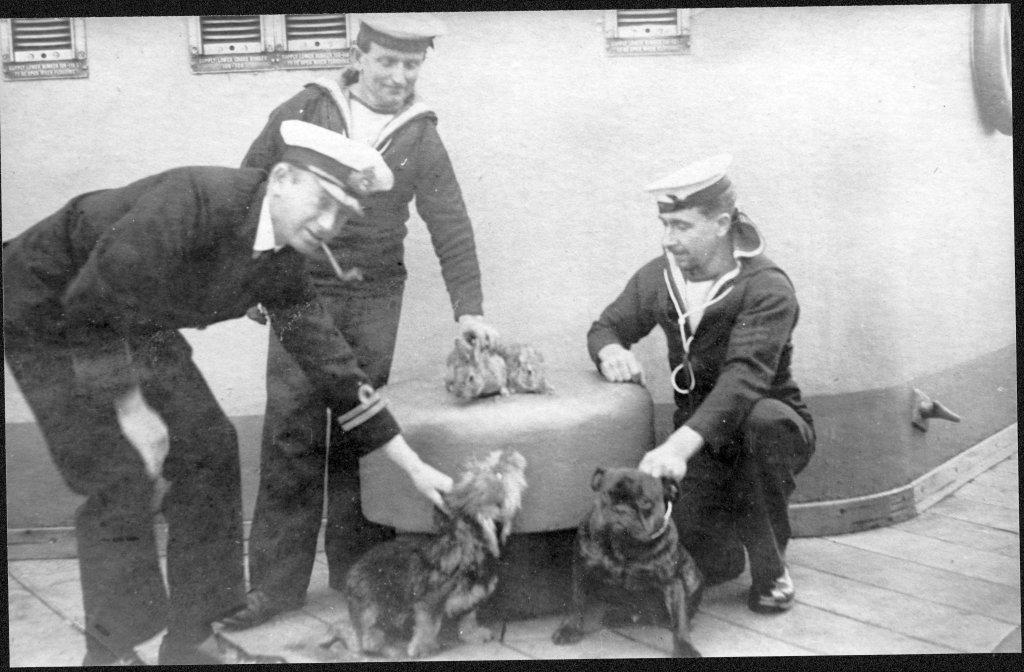 Reference no. ABT-0100
Lt Boyle with HMS New Zealand Pets

The Battle of Dogger Bank as then Lieutenant AD Boyle serving in HMS New Zealand recalled it.

1315 went to Edinburgh with Bancroft to meet the Arnetts who were some friends of his.

Found a Miss Tennant from Fairlie there. Took Miss Tennant and Miss Arnett on a walk to Grantham and then to tea in a shop in Princess St.

Thought Miss Arnett very dull and rather common. Back on board at 1730 to find the ship being prepared for sea and raising steam for full speed.

Thought there must be something on. Weighed at 1810 and proceeded at twenty knots.

Shaped to southeast. Heard the enemy was going to attempt another raid with battle cruisers.

Word passed around that we were likely to meet them at daylight.

Everybody very pleased. Saw nothing during the night.

Daylight went to action stations and shortly afterwards sighted smoke to the northwest of us.

Went off to see what it was. At 0800 sighted enemy ships on port bow and gave chase.

There appeared to be four battle cruisers four light cruisers and lots of destroyers. You could only see their smoke and they were going full speed for Heligoland.

Gradually overhauled them. At 0900 HMS Lion which was leading HMS Tiger and Princess Royal opened fire at 20,000 yds.

I could only see their masts and funnels. HMS New Zealandand HMS Indomitable came last in the line.

HMS New Zealand keeping up with the Flag and Indomitable lagged astern being a slower ship. Our guns were only sighted to 18,500 yds and the Indomitable less.

It was a perfect clear day with very little wind and what there was in the right direction for us. In fact the position for the fight was ideal.

At 0910 the rear enemy ship SMS Blucher appeared to be hit in the stern and the Lion shots were falling a long way to the left.

At 0927 a shot fell about 500 yds short of us and other shots were falling over and short of the ships ahead.

A few minutes later a number of shots fell 1000 yds short of us and around the ship ahead. They all burst on contact with the water and sent up columns of water.

The noise of those shells bursting and the noise of our firing was getting a bit thick. At 0940 we opened fire at our maximum range 18,500 yds.

It was very difficult to lay as our guns kept getting down to the stops. The enemy altered away and the range very soon got too big for us.

There was a lull then until 1045 when we opened fire again.

During the lull the 13.5 in ships ahead of us were firing rapidly and were getting hit occasionally. The enemies rear ship seemed to be on fire with speed reduced.

She dropped behind the others. The Lion pulled out of line at 1030 with a list and steamed to the northwest.

At 1050 the three leading ships of the enemy steamed away and made for Heligoland. Also all there light cruisers and destroyers.

We then attacked the Blucher and fired on and off at her until 1150 with ranges decreasing to 5,500 yds when she blew up and sank.

It took an awful lot of shells to sink her and in the last half-hour shells from our four ships where continually hitting her and she was generally on fire.

It was really a very pretty sight but pretty nasty for them. In the end we could see all their men fallen in on the quarterdeck.

Destroyers were sent in to pick up survivors and they got to her just as she blew up. We went northwest and left them there.

Not long after we got a signal to say a Zeppelin had bombed the destroyers and they had pushed off. I do not know if they had picked anybody up.

Earlier in the day we had seen the Zeppelin but she did not attempt to do anything. I am writing this at 1630 and we have met the Lion.

Something is wrong with her boiler and the Indomitable is taking her in tow.

She has got a bit of a list but they think she will get in all right if a submarine does not get her. They are taking her to Rosyth for temporary repairs.

We were not hit once all day. A signal has come to say that engineer Captain Taylor and nine men were killed and three officers wounded in Tiger.

I do not know of any other casualties. I do not think the Princess Royal was hit but there seem to be some hits on the Lion.

During the show Admiral Beatty hoisted his flag in a destroyer when the Lion was hit and afterwards Princess Royal where he is now.

We are at present keeping near the Lion in case she is attacked. Personally I do not feel very satisfied about the day.