RNZN and the Rum Issue 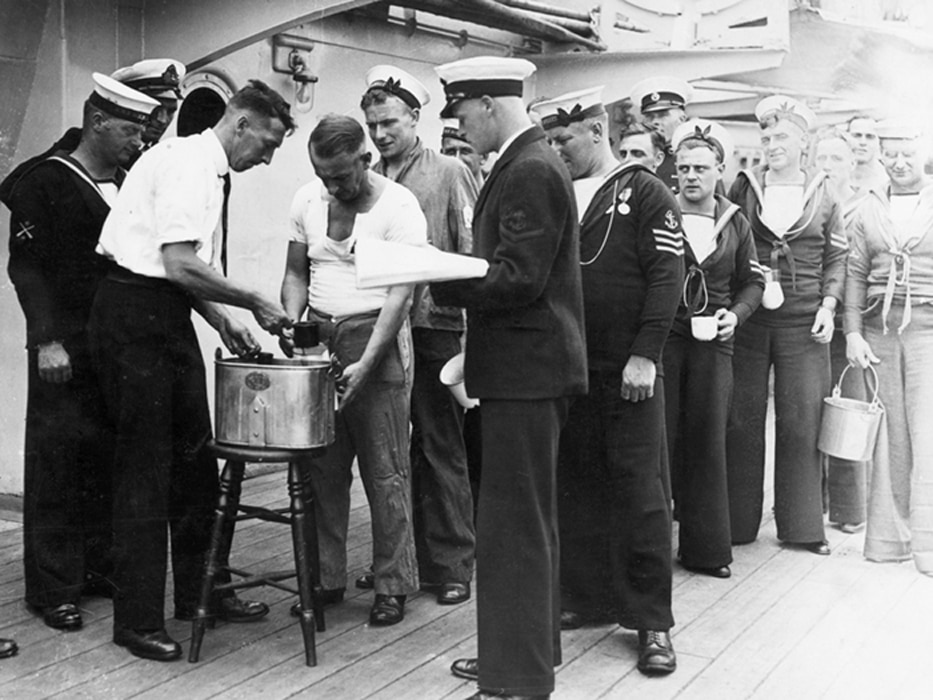 In the 17th century beer was an integral part of the sailors’ daily ration.

This posed two problems, finding enough room to stow the liquor and its keeping qualities at sea in preference to water that was easily contaminated.

Accordingly the Admiralty instructions were to take on as much beer as they could conveniently stow, making up with wine and spirit.

The former was usually Spanish red wine and the later brandy.  When it was necessary to issue alternatives to beer the issue was either one-pint of wine or half a pint of spirit.

The type of liquor issued was dependent on where the Royal Navy’s ships were operating. For instance, around the United Kingdom and northern waters beer was supplied.

Ships operating in the Mediterranean were supplied with wine and in the Caribbean it was rum.  Captain Cook supposedly brewed beer on his first voyage to New Zealand.

After the capture of Jamaica in 1655, by Admiral Penn rum began to supersede brandy.  It was cheap, easy to obtain and improved with keeping.

In 1731, rum was made an official issue to seamen and the daily half pint was issued in two equal parts, one in the morning and the other in the evening.

This was neat spirit and drunkenness became rife especially on the West Indies Station.  The Commander in Chief, Vice Admiral Edward Vernon issued the following order on 21 August 1740

To Captains of the Squadron!  Whereas the Pernicious Custom of the Seamen drinking their Allowance of Rum in Drams and often at once, is attended by many fatal Effects to their Morals as well as their Health, the daily allowance of half a pint a man is to be mixed with a quart of water, to be mixed in one Scuttled Butt kept for that purpose, and to be done upon Deck, and in the presence of the Lieutenant of the Watch, who is to see that the men are not defrauded of their allowance of Rum; it is to be served in two servings, on in the morning and the other in the afternoon.  The men that are good Husbands may from the savings of their Salt Provisions and Bread, purchase Sugar and Limes to make the water more palatable to them.  Dated 21 August 1740 on board HMS Burford in Port Royal Harbour.[1]

The diluted rum henceforth became known as “Grog” because of the admiral’s nickname of “Old Grog” a reference to his habit of wearing clothing made of grogram.

After Trafalgar in 1805 rum became known as “Nelson’s Blood” because of the mistaken belief that Nelsons body was conveyed back to Brittain in a barrel of neat rum to preserve it and that the spirit was tapped by the sentries keeping watch.  Nelson was preserved in a barrel of brandy.[2]

Until 1850, the daily ration remained at half a pint (300ml) of neat spirit.  A committee formed to investigate drunkenness in the navy recommended that the ration be halved and that it not be issued to cadets and boys.

These recommendations were adopted, in addition, pay was increased in compensation and men not wishing to take up their spirit ration could receive grog money based on the value of the spirit.

The strength of the rum was fixed by Admiralty order in February 1866.[3] In 1881, the issue of a rum ration to officers other than warrant officers ceased altogether, and in the case of the ships company the issue was limited to those over the age of twenty.

By this time the tot amount had been reduced to ½ gill (1/8th pint) as water now could be safely stored aboard ship. Note that the amount was 94.6% proof not 37% as in most of today’s spirits.

The Book of Reference BR93 Manual of Victualling for 1939 described the rum issued to sailors as ‘a blend of West Indian (mainly Demerara and Trinidad) with proportions of Natal and Mauritius Rums.’[4]

Junior Rates received theirs 2 parts water to one part rum served in an 8 oz glass.

The Royal Navy discontinued the issue of rum on 31 July 1970. Many memorial services were held at ships and establishments all around the world, to commemorate the passing of an old and revered naval tradition.

From the first presence of Royal Naval ships and sailors in New Zealand the rum ration was issued daily.

The tradition was continued on with the formation of the New Zealand Division of the Royal Navy.

After the change to the Royal New Zealand Navy, the tradition was a hallowed tradition and it became ingrained into the life of the New Zealand sailor.

Up until the 1960’s the rum was supplied by Black Heart Rum to the RNZN as mentioned on their labels.

In the late 1960s, the supply was changed to Bundaberg in Australia but reverted back to Jamaican origin rum when the issuing of rum was discontinued in 1990.

Rum was issued to sailors when they were sea going (i.e. not posted to the shore establishment HMNZS Philomel). Sailors had to be older than the then legal drinking age (20yrs) to receive their issue.

Taking a tot of rum was not compulsory. Sailors who did not wish to take up their rum issue could receive an allowance in lieu.

Junior ratings (Ordinary Rates, Able Rates and Leading Hands) were required to drink their rum issue on the spot in front of the Officer of the Day and duty Petty Officer between the hours of 1150 to 1210 daily.

Senior rates were allowed to take their rum issue back to their mess. Issues with rum and drunkenness occurred when senior rates stored and then consumed a number of tots at one time.

This was a personal decision of the individual sailor, and was not encouraged by the RNZN.[5]

Junior Ratings never received neat rum officially. It was always mixed with water on the basis of one part rum to two parts water.

This was changed to one part water and one part rum by the RNZN. Senior ratings rum issue undiluted with an alcoholic percentage of 98% or 148 over-proof and was given to all Warrant Officers, Chief Petty Officers and Petty Officers not on duty.

This had to be consumed in their messdeck before pipedown as it would not keep. In 1969, for example the navy rum was drawn from the rum store by each mess via the Rum Bosun. Most Senior Rates stored their tots as their jobs on board had an element of danger and they could not afford to be under the influence.

It was then taken down to the messdeck and issued to those men entitled.

Ratings that were under the legal drinking age had to leave the mess during this time.

This routine changed around 1980, when the routine of issuing in front of the OOD was adopted after a Junior rate died due to alcohol.

A Rating could have Limers (a lime cordial from a tin). Junior Ratings had to request to receive rum it was not just given to them.

Ending of the Rum Issue

In the 1980s, discussions were held about ending the rum issue.

A survey of senior rates (Petty Officer, Chief Petty Officer, and Warrant Officer) was carried out in 1984 to measure attitudes to the rum issue as it was then in the RNZN.  From the responses received the following attitudes were recorded:[7]

Senior rates over the age 35 were in favour of discontinuing the rum issue but those below 35 wanted it to continue. However, by 1989 more sailors were receiving an allowance than taking their rum issue.[8]

In December 1989, Chief of Naval Staff RA Somerford Teagle made a decision to end the issue of rum. He issued the following order in February 1990.

In the media, the reason given was that it was inappropriate to issue men with spirits and then have them operating complex equipment.[10]

The last rum issue was made on 28 February 1990 and just with the Royal Navy, similar ceremonies mourning the passing of the rum issue were held.

However rum has not disappeared from the Navy completely. The traditional order to “Splice the Main Brace” is still made on special occasions.

At such times each officer and rating over the age of eighteen is issued with one-eighth of a pint of spirits, or two 12-oz cans (330ml) of beer if spirits are not available.

Although the meaning of this expression is well known, its origin is somewhat obscure.

An extra issue of spirits by tradition has been made in exceptional circumstances, such as after a particularly arduous spell of service or strenuous job of work.

In a sailing ship the main brace was one of the stoutest ropes in the running rigging.

If during an action this had been shot away, or parted in rough weather, and a spare was not available, the work of splicing it was a task of such difficulty and rarity that it merited an extra rum ration for those who carried out the work.

It is in this connection that the expression is said to have its origin.

How the Rum was measured[11]

It may be of interest to note that when strong rum and water are added together a contraction in volume and a temporary rise in temperature take place, owing to a chemical reaction between the water and the alcohol, so that a pint (600ml) of water and a pint of rum will not produce a quart (1200ml).[12]

The Navy Museum has many objects in its collection connected to the issuing of rum.

[11] Note that all measurements quoted are British Imperial. 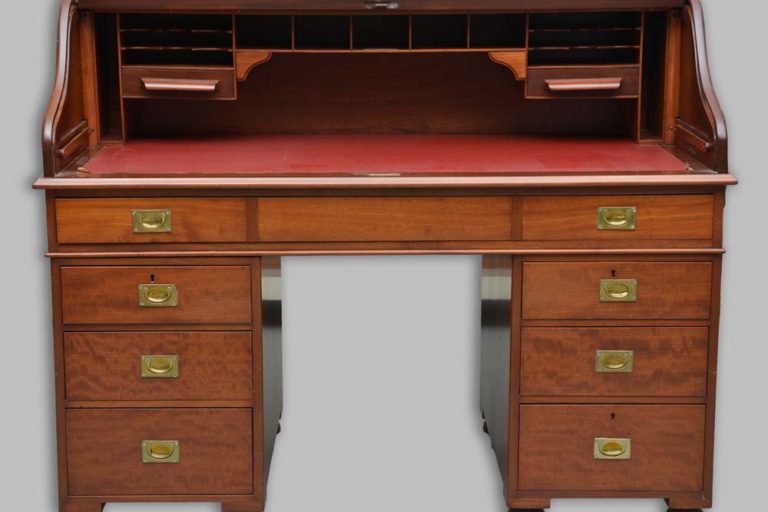 Desk from the Captain’s Cabin in HMS Philomel.