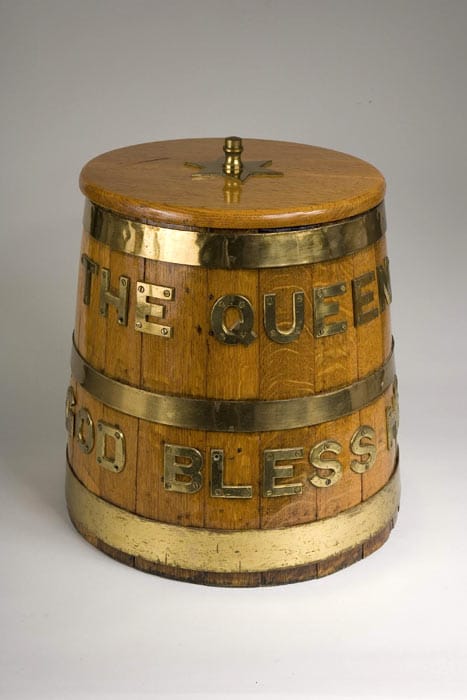 For a naval officer, it was considered good form to reward the ship’s company with a drink after hazardous or difficult task aboard ship.

Originally, it was an order for one of the most difficult emergency repair jobs aboard a sailing ship; it later became a euphemism for authorized celebratory drinking afterward, and then the name of an order to grant the crew an extra ration of rum or grog.

The mainbrace ran from the main yard to the deck and was used to position the yard to which was attached the main sail of a square-rigged sailing warship.

Gunners in battle commonly aimed for the ship’s rigging during naval battles, with the mainbrace being the prime target.

Therefore, any damage to this piece of rigging needed to be repaired as rapidly but also correctly as possible.

As the main brace ran through a number of blocks it could not be repaired with a short splice or a knot. The Boatswain would supervise a group of the most experienced Able Seamen to complete the repair task by splicing a long piece of hemp rope.

The ends of the main brace would be unravelled and a piece of new rope woven in. This could be a hard and long task and also very dangerous if the ship was in combat. Without a main brace the warship could not change course.

On completion of the task, it was customary for the men to be rewarded with an extra ration of rum.

Eventually the order “Splice the mainbrace” came to mean that the crew would receive an extra ration of rum, and was issued on special occasions: after victory in battle, the change of a monarch, a royal birth, a royal wedding or an inspection of the fleet.

As an example Splice the Mainbrace was ordered in recognition of the RNZN being presented with a ‘Gold’ Award from the NZ Business Excellence Foundation.

On Friday, 20 November 2009 his Excellency the Governor General and Commander-in-Chief ordered a ‘splice the mainbrace’.

Refreshments were made available for personnel less than 18 years of age, as well as for those who wished to come along to and celebrate the RNZNs achievement with a non-alcoholic alternative.

The rum now provided is not the good old fashioned navy rum. Stock was run down and the Museum holds a few bottles in its collection.

Today, the right to order ‘splice the main brace’ for the RNZN remains the preserve of the Chief of Navy and the Governor General of New Zealand.

In the case of the Royal Navy, the Queen and the Board of Admiralty retain the right which they exercised in 2005 after the International Fleet Review when Her Majesty finished her message to the fleet with the instruction to ‘splice the main brace’