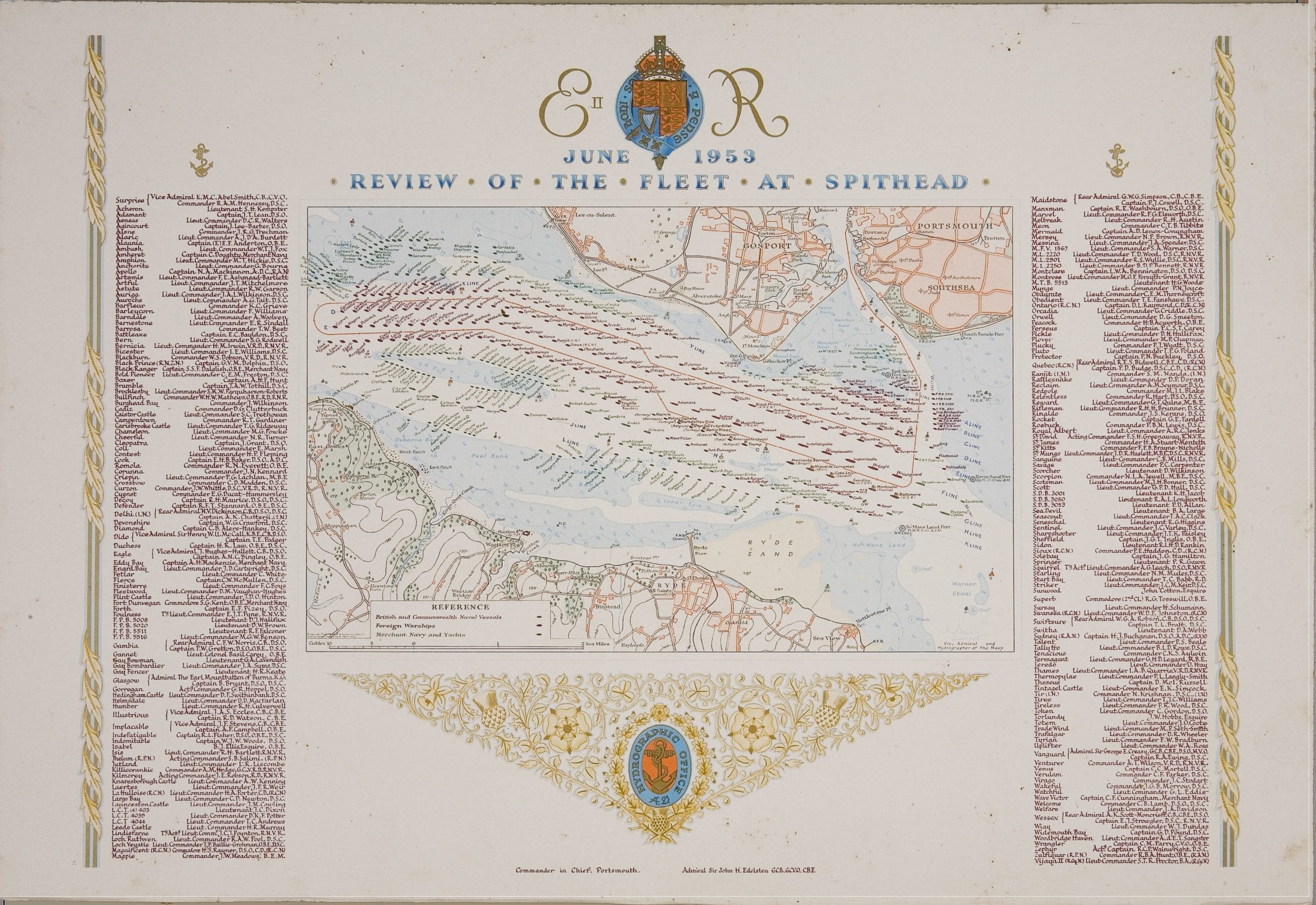 Read about the origins of Fleet Reviews,  ‘Man Ship’ and ‘Cheer Ship’.

A Fleet Review is a formal inspection of the fleet of a navy by the monarch. Warships from friendly nations (Dominion/Commonwealth nations in the case of the RN) would also be present by formal invitation.[1] There were two original reasons for holding a Fleet Review. The first is to mobilise the fleet for war and the second is to demonstrate to potential enemies and friendly powers the naval strength of the nation. The third cause for holding a Fleet Review that has developed since 1415 is to hold a celebration of a significant Royal occasion for instance a coronation or anniversary. This cements the relationship of the senior service to the monarch.

The first recorded Royal Review took place in 1415 when King Henry V reviewed his fleet before sailing to France to take the offensive in the 100 Years War.[2]  Nearly all the Fleet Reviews have taken place at Spithead. Between 1415 and 1977 43 Royal Fleet Reviews were held. As an example, the Royal Review held on 23 April 1856 of the RN Baltic Fleet served two purposes. Firstly it marked the end of the Crimean War and the British, French and Turkish victory over Russia. Secondly it displayed the offensive power of the Royal Navy to those nations who would think of taking on Her Majesty’s navy.[3] This was one of seventeen royal reviews held during the reign of Queen Victoria.[4]

A Fleet Review as a display of power was not confined to the 19th century. On 18 July 1914 the Royal Navy assembled at Spithead for a Royal Naval Review. This is against a time of tension across Europe, and the great naval race with Imperial Germany. Instead of the annual exercises, there would be a Fleet Review along with small exercises. As a happenstance, the Admiralty also wanted to test the ‘machinery of mobilisation’.[5] 232 vessels anchored at Spithead including 59 battleships (including the battlecruiser HMS New Zealand), 55 cruisers, 78 destroyers, smaller vessels, and over 70,000 officers and ratings.[6] Due to the size of the Review it went from the 18th until the 29th as King George V inspected part of his fleet each day on the Royal Yacht. As the fleet was due to disperse on the 29th, the Admiralty sent the order to mobilise for preparation for war and the warships departed for their war stations. In the case of HMS New Zealand this was at Scapa Flow with the Grand Fleet. In 1919 to celebrate the naval victories of the First World War, King George V held a Fleet Review off Southend.[7]

The largest Fleet Review by numbers took place in May 1944 when King George VI reviewed the assembled fleet for Operation NEPTUNE. Unlike other reviews this was not publicised. Over 800 vessels of all types were assembled before they were sent to their ports of embarkation.[8]

Fleet Reviews in which vessels of the NZ Division of the RN took part in:[9]

Fleet Reviews in which vessels of the RNZN took part in:[10]

On an extra note, the occasion of a Fleet Review is an opportunity to ‘splice the mainbrace’.[11]

This is the order given to the ship’s company by the Commanding Officer to dispose along the weather decks on a ceremonial occasion, for example during a Fleet Review.[12] The origin of this salute comes from the time of sailing warships when hands would be seen to be lining the yards by standing on them supported by lifelines. This showed that the ship’s intentions where ‘friendly’ because with the crew ‘manning the ship’ they could not be manning the guns at the same time.[13] For example in the 17th century warships were ordered ‘to be made ‘neat and predie (pretty), and their decks, tops, masts and shrouds thoroughly manned and, as it were, ‘hung with men’.’[14] The same applies today when a warship enters harbour the ship’s company is seen on the weather decks showing that the ship is not closed up at action stations.

Most of the works on naval traditions do not mention this specifically. But in a photo album in the Museum’s collection from the 1919 cruise of HMS New Zealand there is an image of the warship HMS Queen Elizabeth arriving at Portsmouth on 20 February 1919 just HMS New Zealand was preparing to leave. The caption underneath this image states that the ship’s company of HMS New Zealand manned ship and cheered as the Queen Elizabeth passed by.  By this measure, cheer ship is a salute from one warship to another and acknowledgement of their shared history within the fleet. Both ships served with the Royal Navy’s Grand Fleet throughout the First World War.

[9] Dates and ships from the RNZN Museum’s database.