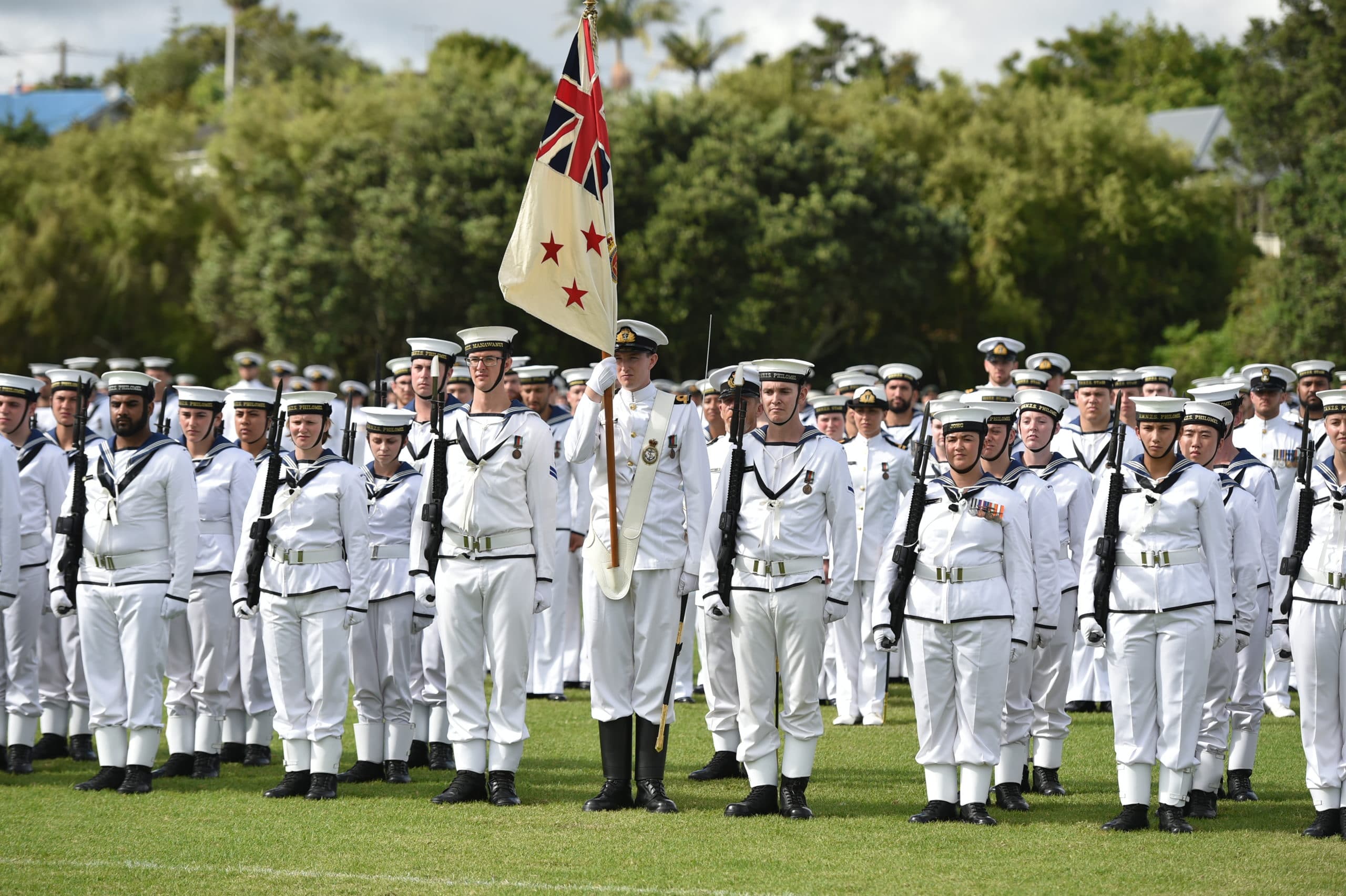 On 9 July 1924 The Governor General of New Zealand, Admiral of the Fleet, Viscount Jellicoe, wrote to The Secretary of State for the Colonies to request His Majesty’s approval for a King’s Colour to be presented to the New Zealand Division of the Royal Navy. His Majesty King George V gave his approval and New Zealand accordingly expended £70 on the provision of the:

The King’s Colour was taken on charge in HMS Dunedin on 31 December 1926 without ceremony. When not embarked it is kept in a special case in HMNZS Philomel. It is only removed with full ceremonial and there is a formal register kept detailing dates and places of embarkation/landing.  In 1936 King George VI presented a new King’s Colour which was delivered to the New Zealand Division of the Royal Navy at Basin Reserve, Wellington on 22 November 1937 by Viscount Galway, the Governor General of New Zealand.

On 23 September 1991 the Queen’s Colour was presented to the RNZN by Her Excellency Dame Catherine Tizard DCMG, at Queen’s Wharf, Wellington. The Queen’s Colours that were laid up are now located in the Chapel of St. Christopher located in HMNZS Philomel. They are placed on the southern wall (Seaward side).  The present Colour is held at the Philomel Quarterdeck in a case for its preservation and conservation.[1]

The Queen’s Colour of the RNZN is a double folded silk New Zealand White Ensign 1.17m x 0.94m with a Royal Crown and Cipher embodied, with gold and blue silk cords and gold tassels of 1.07m in length attached. The colour is carried on an ash staff 2.1m in length and 7.5cm in circumference which is surmounted by a gilt badge consisting of an Admiralty anchor on a 3 faces shield with a crown superimposed.[2]

The Queen’s Colour is paraded on Shore on the following occasions:

-At parades to celebrate the birthday of HM.

The Queen’s colour is not paraded onboard ships of the RNZN or in foreign territory. It is lowered only to HM The Queen and other members of the royal family, foreign sovereigns, Presidents of republican states, members of foreign reigning royal families, governor generals, governors, or special royal commissioners acting on behalf of the sovereign within their jurisdictions. The Queen’s Colour when uncased is to be received at all time with the highest respect with arms presented, officers saluting and the band playing the New Zealand national anthem.[3]