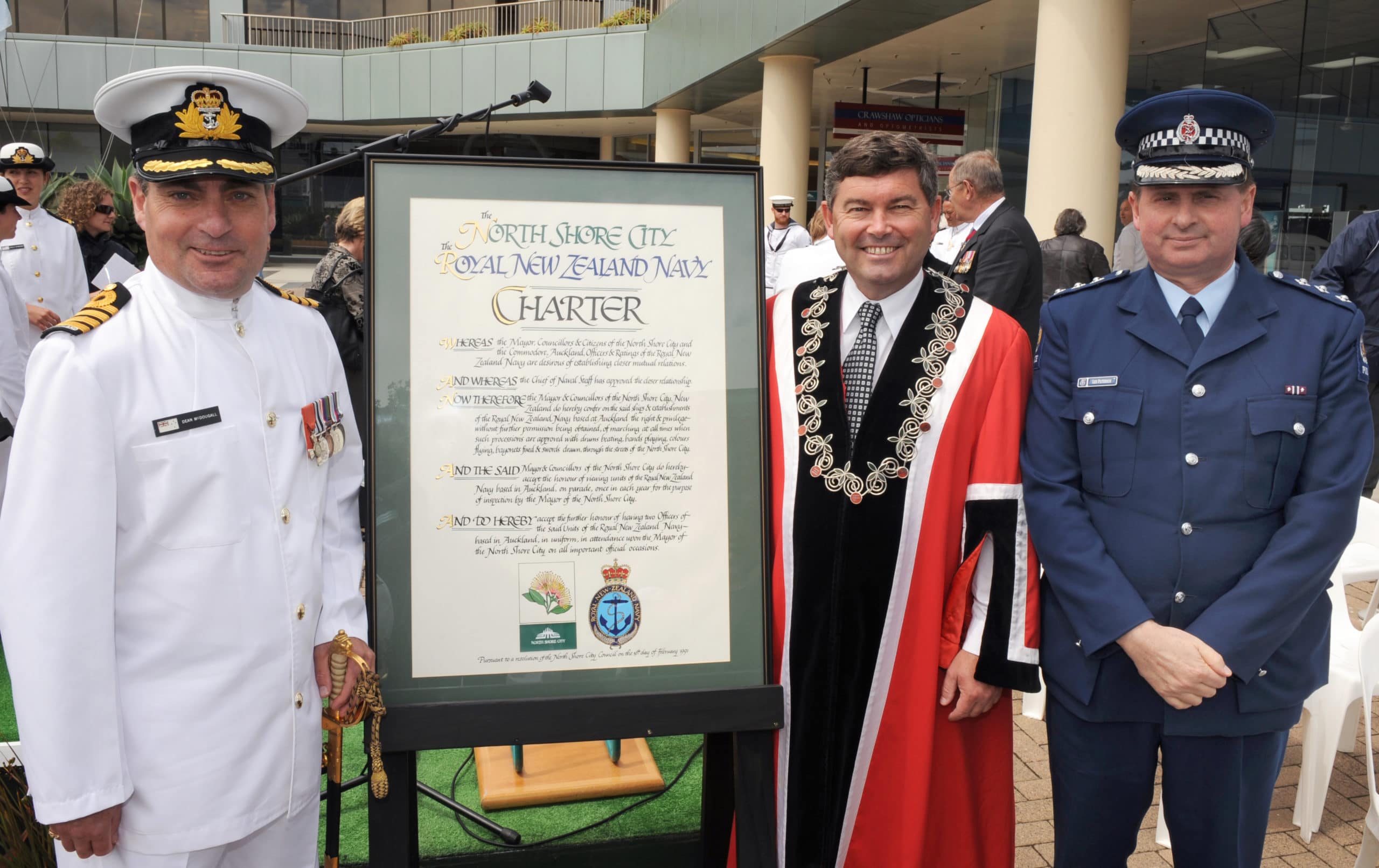 Reference no. MC 08-0434-06
Charter given to the RNZN by the former North Shore City Council

There is no readily accessible definitive source for this tradition and custom. The custom of granting freedom of a city is old and evolves from a military, rather than a naval background.

From the time of the middle ages kings used to divide their kingdoms amongst a few nobles who were responsible for providing armed men, should the case arise. In the main the land allocated came under the total authority of the noble, who drew his revenue from the land. To split the power base of the nobles, the lands granted to them were dispersed among several regions. Combined with the division of the land between several nobles, this ensured that no one of them would have sufficient power and armed force to challenge the throne. Between the nobles there were frequent disagreements, often leading to armed conflict. Coupled with the ever-present threat of foreign invasion towns and cities were fortified and armed parties from other areas excluded.

With the passage of time standing armies developed, with a base in a specific region, loosely conforming to what is now regarded as the regimental system. Even so, the regiment’s base was contained within a single city. It there fore became a privilege for a regiment to be granted the right to enter another city, fully armed and ready for action.

The elements of the charter refer to the right to march through the streets with drums beating, colours unfurled, swords drawn and bayonets fixed. These elements had major significance in the past. The drum was the main method of conveying orders on the battlefield (and at sea); the colours designated the location of the commander and the weapons are ready for combat. Having an armed party thus ready for action put the local populace at is mercy, i.e. able to be captured, raped, pillaged etc.

In modem times the granting of the freedom of a city is a means whereby the civic authority can express a close relationship with a regiment. This is reciprocated, by for example, the regiment having officers attend upon the mayor on official occasions.

The Navy’s link with this old custom is fairly recent, mainly since the Second World War. Prior to this there were the odd instances of towns and cities adopting ships, but this was more in the nature of providing small luxuries for the ship with which an association had developed. During the Second World War some effort was made in Britain to develop links between towns and cities with specific ships, despite the difficulties of wartime conditions, to help raise/maintain civilian morale.

All the references that have been located for formal associations between New Zealand ships and civic authorities date from the 1960s.

In 1973 the frigate HMNZS Taranaki was given a charter to the city of New Plymouth. It stated:

Now Therefore be it known to all men by these present that the Mayor and Councillors do hereby confer upon the officers and company of H.M.N.Z.S. Taranaki the right and privilege of marching with drums beating, band playing, colours flying, bayonets fixed and swords drawn through the streets of the City of New Plymouth when such processions are approved and mutually convenient.

Up to the formation of the Auckland Super City the RNZN enjoyed the freedom of North Shore City based on the original charter issued for Takapuna and Devonport. This Charter is now in the object collection of the Navy Museum.

In Napier the Navy enjoys this privilege as an acknowledgement of the help given to it by HMS Veronica, Dunedin, and Diomede.

Perhaps our most important charter is at Waitangi. On February 6 1990 at the 150th centennial for the Treaty of Waitangi, a Charter was presented to the RNZN that conferred on it ‘… the right and privilege, without further permission being obtained, of marching at all times with drums beating, bands playing, colours flying, bayonets fixed and swords drawn through the lands of the Tai Tokerau, especially the Treaty Grounds’.

It cemented a relationship between the Navy and the Tai Tokerau which pre-dated nationhood. This honour was bestowed upon the Navy at a special ceremony conducted in 1990 which extends special privileges to naval visitors in the Far North.

Note with the decommissioning of HMNZS Resolution in 2012 the charter for Gisborne lapsed.