To ensure fighting efficiency there developed the method of Action Stations combined with the Watch Method when the ship is at sea and in harbour.  This meant the ship could be run at any time of the day with a routine that did not tire out the men and kept the ship to come to action stations if need be. This is because, unlike an army, the navy has to be ready to fight at any time and anywhere.

Throughout the naval history the primary consideration for the organisation of any warship is its fighting efficiency.  To ensure fighting efficiency there developed the method of Action Stations combined with the Watch Method when the ship is at sea and in harbour.  This meant the ship could be run at any time of the day with a routine that did not tire out the men and kept the ship to come to action stations if need be. This is because, unlike an army, the navy has to be ready to fight at any time and anywhere.[1]

The other method of organisation that was adopted by the navy was the Divisional Organisation.  Ships were divided up into parts dependent on the size of the ship as the diagram illustrates. 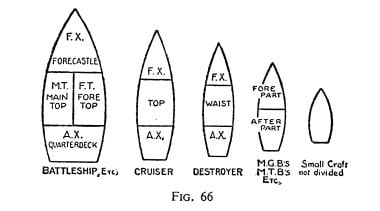 An officer, usually of Lieutenant’s rank is placed in charge of each division and thus is referred to as the Divisional Officer. It is his (or hers) responsibility for the general welfare, requests, and discipline of each man and woman in the division. The ratings on a ship are also divided equally amongst the divisions so that there is an equal spread of senior and junior ratings.  This enables the running of the ship to be carried out in an efficient manner and for matters pertaining to pay, regulations, discipline, and welfare to be handled at a level so that it did not overwhelm the senior officers. The obvious side benefit was to also develop an espirit de corps.

The Royal New Zealand Navy has a yearly division held on the last Friday of January. Every rating and officer is present in dress uniform on the day unless they are required by deployment or duty to be elsewhere. The fleet is also in harbour for the event.  The Governor-General of New Zealand inspects the men and women of the RNZN and takes the salute as there is a march past with bands playing and our colours on display.

There are also month divisions held within the fleet and shore establishments. Topics of discussion are usually listed in the weekly orders distributed throughout the RNZN.

Some books on traditions state that the Divisions system was introduced into the Royal Navy in the 18th century by Admiral Kempenfelt who divided up his ship’s company and appointed officers to inspect and control their conduct. His idea acknowledged that the commanding officer could not oversee the entire ship and there had to be maintained a distance. By bringing in this practice a commander could get consistency of effort and commitment to the standing orders. Despite the gulf between officers and men, an effective warship needed some personal knowledge of men that were under an officer’s command when it came time to enforce discipline and fight the ship. It also allowed the ship to muster all the ship’s company for kit inspection, while men could maintain watch. It also allowed the dissemination of orders to all of the ship’s company without the risk of ‘Chinese whispers’. It can be said that this was a significant development of command and control at sea, especially as ships became larger and the size of the ship’s company increased proportionally. The practice of messing also assisted the formation of divisions.

This system in its simplest form continued into the 19th century. However, with the revolution in naval warfare and the increasing specialisation of tasks aboard ship the divisional system became even more critical. Divisions now became based around specialisations e.g. stokers, signals, gunners etc. As the ship became more compartmentalised, it was even more critical for orders, regulations and discipline to be communicated throughout the ship. At this time, from the officer’s point of view, divisions were an opportunity to display his personal leadership and the state of the division was often used to consider an officer’s suitability for command and promotion. Again to, as the sailors became more educated it formalised the practice even further. It is important to note here that divisions in the 18th and 19th century do not have welfare role as we would recognise today in the RNZN. One of the driving forces for the creation of divisions was the famous mutinies at Spithead and The Nore in 1797. As size of ships and their companies increased it put pressure on the existing man-management process. This led to the creation of standing orders and the creation of divisions where an officer was entrusted with a portion of the ship’s company. This also had tension for sailors who resented restrictions on their freedom.

In the 20th century Divisions retained their purpose from the 19th century but what was new was the idea of an structure to look after the welfare of the men. This took time to develop but the influx of civilians into the navy during the First and Second World Wars had an impact. Civilians, used to a work environment were they could expect some level support for their welfare forced the RN to adapt to this reality. Post 1945 the changing social contract has its reflection in the divisional structure and its purpose.

In an modern navy, such as RNZN, divisions have their place for discipline, dissemination of regulations, instructions, orders, and the vehicle for command and control aboard ship and on shore. They are also an avenue for looking after the welfare of the ratings because in today’s New Zealand we need to value and retain our personnel. This was not an issue for the navy up until the 1960s. Thus the junior officer in charge of a division has a range of leadership skills that he or she must draw upon to meet this challenge.

It is hard to think of the navy without divisions, and impossible to see how without them the military organisation could function effectively.