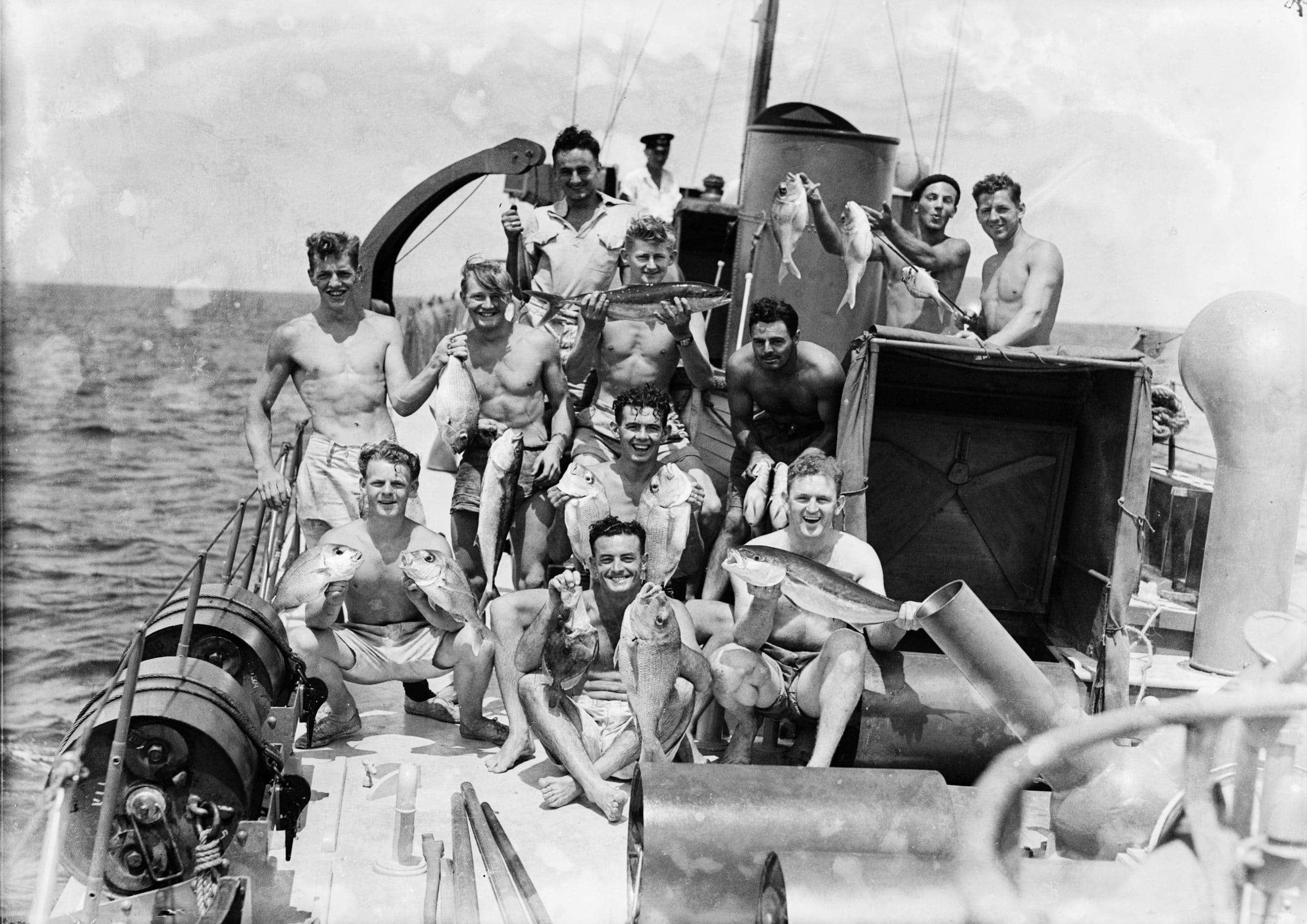 Read a list of naval slang with the relevant definition. For example, ‘Taken Aback’ – A ship is said to be taken aback when through a sudden wind shift or careless steering the sails billow in reverse. It has now come to mean taken by surprise or given a shock.

Able Seaman – the term originally was Able Rate meaning someone who was able to “hand, reef, and steer” therefore ‘able’ to carry out all the duties of a seaman.

All at Sea – one is said to be all at sea if you are in a state of confusion or bewildered – it is derived from the position of a ship that has lost its bearings.

Awash – nowadays this term has a positive connotation, but the term means the precise moment when a ship becomes so submerged that its decks become awash with water. i.e. it is sinking.

Batten down the hatches – this term is used now to mean making preparations if trouble is looming. It comes from of securing the hatchways, the opening in the deck and their covering was known as the hatch. So if the ship was facing a stormy sea, the hatches would be closed tight and covered with a piece of canvas secured by a thin piece of wood called the batten to prevent water entering the ship via the hatchway.

Couple of Shakes – the sailor’s way of measuring a show period of time alludes to the speed with which a sail would begin to shake if the helmsman allowed the ship to head too closely to the wind.

Cracking On – to ‘crack on’ meant that a ship would set more sail in order to increase its speed. The word relates to the loud retorts which are heard as the straining sails and sheets are eased.

Dressing Down – the expression for a severe scolding or reprimand came into use in the 1660s. On a ship, dressing down means to Dress or apply a preservative to the rigging. This unpleasant and dangerous job may have been assigned as punishment for a wayward sailor.

Dummy Run – this term for a practice comes from torpedo training when runs were made with torpedoes fitted with dummy warheads.

Dutch Courage – this term came into use during the 17th century during the Anglo-Dutch Wars. It was believed that the ship’s company of Dutch warships were so cowardly that they needed a glass of schnapps before they would sail out and fight the Royal Navy, which given the level of the Dutch attacks on English ports was simply not true.

Give them a wide berth – the term for avoiding someone or something comes from the practice of giving anchored ships in harbour a wide berth to avoid collision.

Hard to Fathom – a fathom is an old nautical measurement used for distances and depths. The Admiralty defined as 6.08ft (2m) or one thousandth of a nautical mile 6080ft (1853m) usually to make calculations easier it was rounded down to 6ft. The word comes from the old Anglo-Saxon word faeom ‘to embrace’ which referred to the distance along outstretched arms of a person when about to embrace. If a sailor, taking soundings could not find the exact depth, it was ‘hard to fathom’.

In the doldrums – this is a term that may have come from the shore into naval use in the days of sailing warships. The doldrums are the equatorial regions of the Atlantic and Pacific Oceans. The weather conditions in these areas result in extended periods of calm or squalls and hurricanes/cyclones.

Know the Ropes – on a sailing ship it was important to know what the function and name of each rope aboard ship. Only from the precise position that ropes were secured on deck could they be identified. Hence ‘knowing the ropes’ became the distinction between an old hand and the beginner.

Money for Old Rope – sailing ships went through a lot of rope, for example Nelson’s HMS Victory needed some 26km of rope for rigging alone. Naturally this rope would become used up and had to be disposed of. Naturally sailors, always on the lookout for extra income would sell the rope ashore for some quick and easy money.

Oggin – this jack speak for the sea has two possible origins, either a sailor mispronounced the word ocean, or from the slang term hogwash, the swill that was fed to pigs.

Out of the Blue – something totally unexpected. Is short for ‘out of a clear blue sky’. A naval example is HMS Eurydice. She was a few miles out of Portsmouth on a calm sunny day with clear blue skies when a squall struck and she was sunk with the loss of 368 men. Thirty minutes after the sinking the weather had returned to near-perfect conditions.

Over the Barrel – a term that has come to mean a person is placed in a predicament from which there is no escape. The term comes from the practice of tying a sailor who was to be flogged over the barrel of a cannon. It was sometimes known as ‘marrying the gunner’s daughter.’

Piping Hot – this expression had its origins in the way food was collected from the ship’s galley for the mess after a ‘pipe’ was sounded. The sooner it was collected after the ‘pipe’ the hotter it was.

Shanty – the custom of singing work songs aboard ship is a custom that goes back to the 15th century. Songs could be of differing tempos depending on the work being performed aboard ship i.e. raising sails or hauling anchors. The word has its origins in the French word chanter -to sing

Shipshape and Bristol Fashion – this refers to the reputation of ships that operated from the port of Bristol that they were well handled and kept neat and tidy or ‘shipshape’. Due to the extremes of high and low tides at Bristol, gear aboard ship needed to be secured properly hence ‘Bristol fashion’.

Skyscraper – this term was first used in the nineteenth century and used to describe anything that was taller than normal e.g. a horse or penny-farthing bike. This mutated into describing buildings as they sprung up in the early 20th century, for instance the Empire State Building. The term has a nautical origin. The ‘skyscraper sail’ was the highest sail that could be set on a sailing ship – it was so high up it was said to be “scraping the sky.”

Square Meal – a substantial meal this expression comes from the time when sailors ate their food off square wooden plates with a raised edge called a fiddle. This design was to stop food falling off the plate and to set a limit on the amount of food taken. If a seaman overfilled the plate he was said to be ‘on the fiddle’ and he could be punished”

Swinging the Lead – an expression that describes the act of wasting time. It comes from the task aboard ship of dropping a sounding weight (made of lead) over the bows to determine the depth of water. It was seen as a way to avoid the more arduous tasks involved in bringing a ship into harbour.

Taken Aback – A ship is said to be taken aback when through a sudden wind shift or careless steering the sails billow in reverse. It has now come to mean taken by surprise or given a shock.

Whistle up a/the wind – this term is used to describe an activity that is not entirely likely to succeed. In the days of sail, sailors did not whistle aboard ship because it could be confused with the Bosun’s call. However there was one exception. If a ship was becalmed, sailors would whistle in the direction they wish the wind to come from hence ‘whistle up the wind.’