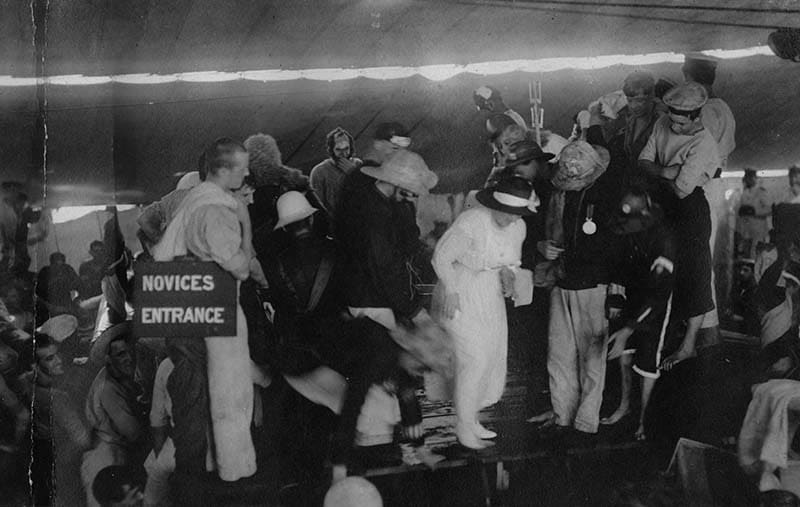 In naval culture ‘crossing the line’ refers to crossing the equator – marked by a lively and rough ceremony initiating every novice (those who have not yet crossed the equator) on board. The event, steeped in tradition with set rituals, grandiose speeches, and elaborate costumes and props, dates back to the 1700s.

The crossing the line ceremony takes place on deck at Neptune’s Royal Court – complete with thrones and a bath for dunking – and is led by King Neptune, his consort, Amphitrite, and assistant, Davy Jones.

Those already initiated undertake a variety of roles in the ceremony: the ‘Bears’ are entrusted with rounding up the uninitiated and ‘dunking’ them, the Clerk ticks off names from a roll, the Royal Barbers shave the novice’s heads, while the Royal Physician administers a ‘bitter tonic’ or ‘soap pill’.

The purpose is to appease the God of the seas and introduce the uninitiated to the “solemn mysteries of the ancient order of the deep”.

Such a ceremony took place on HMS New Zealand on 8 May 1919, as it steamed from India on its way to Australia and New Zealand for a triumphant post-war tour.

Several artefacts in the collection, including photographs and a booklet on the ceremony, assist us in piecing together the occasion. The unique feature of the 1919 ceremony was the presence of a couple of distinguished guests on board – Lord and Lady Jellicoe: “Be it known that there crossed the Line for the first time no less a dignitary than an Admiral of the Fleet… who had earned honour and renown in King Neptunes’ realms for skill, pluck and leadership in many a battle”.

Lord Jellicoe, although not a novice on this journey, was ‘dunked’ while Lady Jellicoe received ‘the Insignia of the Most Unfathomable Order of the Deep Sea Needle, First Class’.

Their good-humoured participation in the ceremony was well received although “it was ordered that the whole ritual should be conducted with the utmost dignity” for the high-ranking guests.

Generally crossing the line was an opportunity to ‘let off some steam’ and turning established rank and social hierarchies on their head!

Novices completing the ceremony would be issued a certificate signed by King Neptune.

The example awarded to New Zealander Lt Cdr Alexander Boyle on the 1919 voyage confers upon him the “Freedom of the Seas”, exempting him from paying further homage to King Neptune.

Interestingly however, he also received a certificate in 1913, so it is unclear if he performed the ceremony twice or just acquired the eye-catching certificate as a souvenir.

Painting the Navy – celebrating 80 years of RNZN with…

The drum has always played a special role in the…

This T-shirt is one of the new items acquired for…

In celebration of 2021 International Women’s Day we highlight Ruth…

He Rā Maumahara national day of remembrance of the New…

October 24th, 2020 75th anniversary of the establishment of United…

Celebrating World Food Day 16 October through items from our…

Oil on velvet painting of HMS Diomede in Auckland during…

Watercolour depicting the Battle of the Falkland Islands, 8 December…

This wooden case contains a portable altar used at sea…

Bank note issued in 1942 by Japanese government for use…