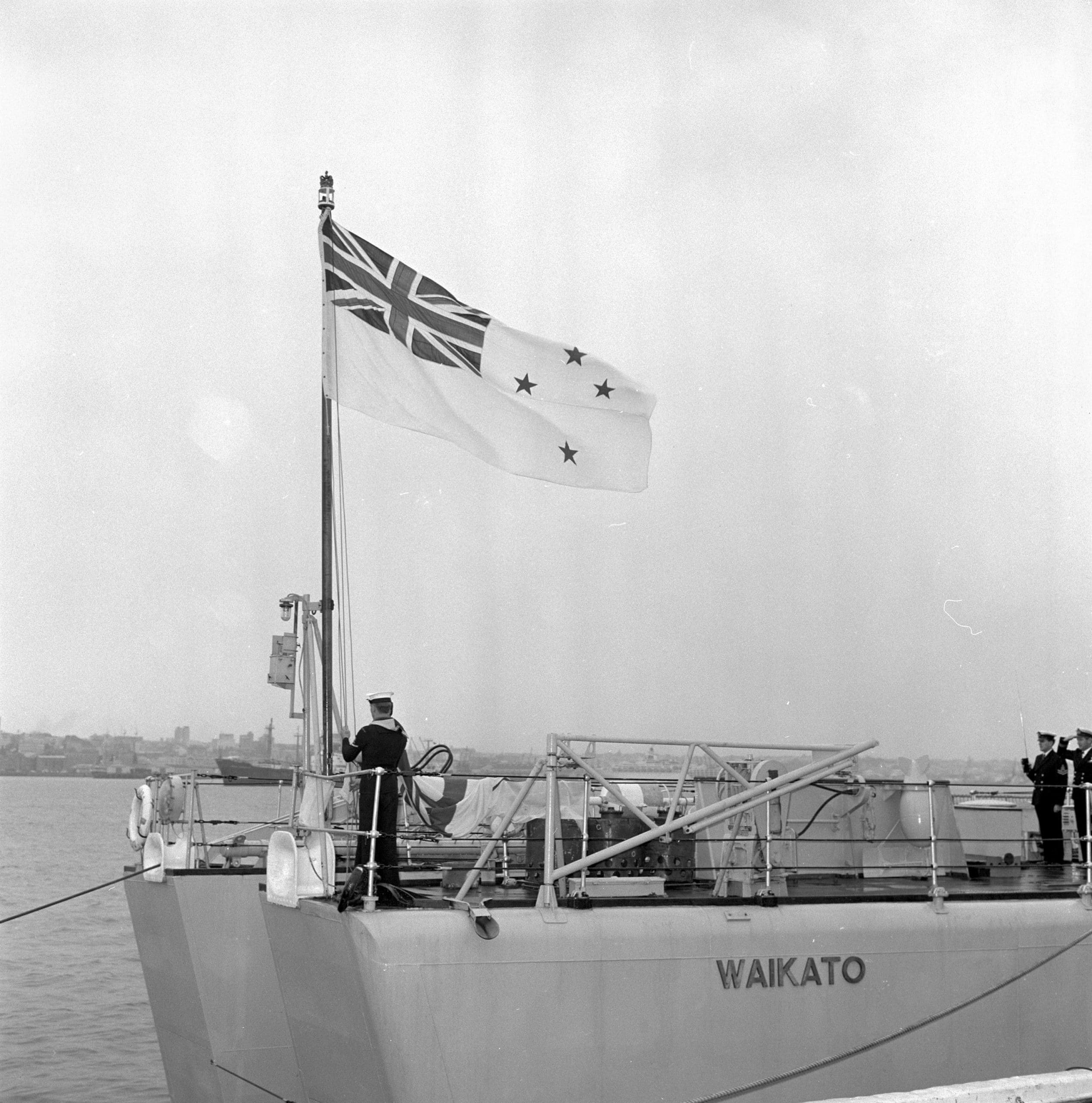 From the 17th Century until 1864 the Royal Navy was divided into three squadrons, the Red, White and Blue, and each wore an ensign of the appropriate colour.

This system was discontinued in 1864 when the White Ensign was adopted for use by the Royal Navy, the Red Ensign allocated to the Merchant Service and the Blue Ensign assigned for government use.

The use of the Blue Ensign includes Fleet auxiliaries and ‘defaced’ was used widely by colonies and dominions as a national flag.

The first New Zealand naval units were vessels which saw service in the New Zealand Wars. These all wore the Union Flag as an ensign.

When the New Zealand Naval Forces were established under the Defence Act of 1913, an Agreement[2] was reached with the Admiralty that New Zealand ships would wear the same ensign and jack[3] as ships of the Royal Navy.

This Agreement was the authorisation for His Majesty’s New Zealand ships to wear the White Ensign, as was the case with HMS Philomel, commissioned into the New Zealand Naval Forces in July 1914. It is unclear, however, whether or not Philomel wore a New Zealand national flag in addition to these.

By the 1930s the New Zealand flag was customarily worn as a jack. At sea, however, a jack is not usually worn and the White Ensign did not provide a sufficient display of the national identity, particularly in baffle.

The granting of the title Royal New Zealand Navy to the New Zealand Naval Forces in 1941, was essentially an incidental matter at the time, albeit one of some significance from an historical perspective.

With this view, it is understandable that there was no discussion of changing ensigns at the time. Throughout the remainder of the Second World War RNZN ships fought under the White Ensign as they did in Korea and during Confrontation in Malaya.

Early documentation on discussions in respect of the development of a distinctive white ensign for the RNZN is particularly sparse.

It would seem that the spark for the change was the introduction of the Australian White Ensign by the Royal Australian Navy in 1967.

Following consultation with the Admiralty, the proposed New Zealand White Ensign was submitted to Her Majesty the Queen for approval, which was given on 20 June 1968.[4] This is seen as an important milestone in the development of Royal New Zealand Navy.[5]

In 1971, on the centenary of the foundation of the Royal New Zealand Yacht Squadron, its Flag Officers were graciously granted permission to wear the New Zealand White Ensign, the only non naval organisation to be granted this honour.

[1] The Sovereign’s Colour is a specially embroidered White Ensign, emblazoned with the Royal Cypher