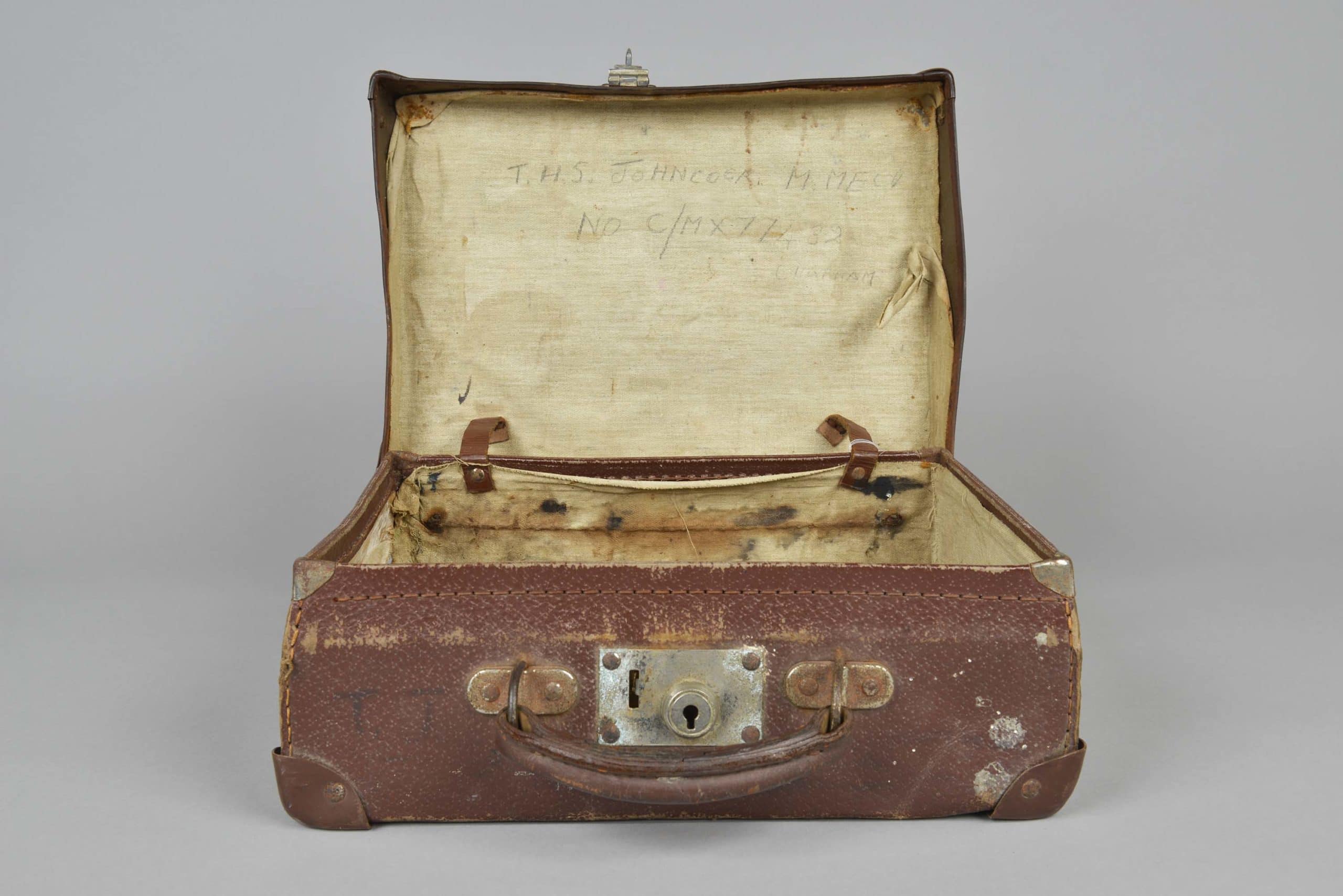 This small brown suitcase is not as ordinary as it first appears. It was carried by Able Seaman Leonard Hill when he left Tjibea Island on a mission to seek help for other stranded crew during the fall of Singapore in 1942. When Singapore fell to Japanese forces in February 1942, Hill was on board the motor launch vessel ML 310.

In their attempt to make it to allied held territory, ML 310 became marooned on Tjibea Island near the Banka Strait. A small party decided to leave the island to get help. Hill was part of this rescue team and spent seven days at sea in a traditional prahu boat before arriving in Merak on the island of Java. During the escape this suitcase contained letters written by the men left on Tjibea Island. These letters were later destroyed by water damage during the voyage.

Hill joined the Auckland Division of the RNVR (NZ) in 1939 and was subsequently mobilised for the war effort in early 1940. By November 1941 he was serving in HMS Sultan, the Royal Naval Base in Singapore. In February 1942 he was on board ML 310, a motor launch vessel commanded by another New Zealander, Lieutenant H.J. Bull RNZNVR. On the night of 13 February 1942, ML 310 was to evacuate members of the Allied High Command as Singapore fell under the control of Japanese forces. On board was Rear Admiral E.J. Spooner and Air Vice Marshal Pulford with another five officers and 26 ratings. Unfortunately as the launch departed Singapore it ran onto a sandbank injuring one of the crew. During the day it would lay up close to the shore. On 14 February ML 310 managed to avoid being bombed by Japanese aircraft. For two days the party successfully avoided contact with Japanese surface vessels. On the afternoon of 15 February when nearing the Banka Strait off the coast of Sumatra, the motor launch was intercepted by a Japanese destroyer. Some accounts state that the destroyer chased ML 310 and sunk it off Tjibea Island. Other accounts of this event state that Lieutenant Bull ran ML 310 ashore on Tjibea Island in escaping from the Japanese destroyer.

With no food, medical supplies, or communication, a small crew was chosen to try and get help to bring back to the others. Lieutenant Bull and his crew made seaworthy a traditional sailing boat, known as a prahu. Then Bull with two ratings and two locals set out to seek help for the stranded party. One of the ratings selected for the rescue mission was Able Seaman Hill. After a passage of seven days they reached Merak in Java. The last six hours of the passage was made by rowing continuously. Bull reported to the Allied HQ in Batavia where arrangements were attempted to be made to help those left on Tjibea Island. Japanese forces attacked Java the day after the rescue party arrived forcing them to flee yet again, making passage to Freemantle, Australia. For their rescue attempt, Lieutenant Bull was awarded the DSC and Able Seaman Hill the DSM. Able Seaman Hill’s award was based on the report of Lieutenant Bull who made special mention of his untiring efforts and devotion to duty both during the action and on the island. Unfortunately, a rescue mission of those left on Tjibea Island could not be made as by that time Japan had complete control of the region’s sea and air. Those left behind remained on the island for two months. Eighteen of the party including Spooner and Pulford and two New Zealanders died of disease. The men who remained alive were captured by Japanese forces.

After his escape and return to friendly forces Able Seaman Hill returned to New Zealand in April 1942. He undertook training in anti-submarine warfare and electrical systems. In January 1943, Hill was posted to ML 403, a Fairmile motor launch located at HMNZS Cook. In 1944 the New Zealand Fairmiles were organised into flotillas and deployed to the Solomon Islands. Hill spent the remainder of the war serving in ML 403 primarily stationed out of HMNZS Kahu, Renard Sound, Solomon Islands. He returned to New Zealand and was discharged from the RNZN in October 1945. The suitcase from Hill’s Tjibea island escape was donated to the museum by Hill’s son, David.

You can read more about Hill and the fall of Singapore here: https://navymuseum.co.nz/uncategorised/ab-leonard-bruce-hill/