As we commemorate the centenary of the German Armistice we also remember the influenza pandemic. By October 31st 1918, the H1N1 Influenza virus had spread across the world. Primarily seen as a civilian tragedy, its effect on the war and the military forces should not be forgotten.

The non virulent wave of the pandemic began in early 1918 and by the end of March it began to appear in American army camps. In early 1918, those infected with the virus had a low mortality rate, with sufferers left incapacitated for a few days. The virus quickly spread to Europe and the Western Front. In May, the Royal Navy’s Grand Fleet reported over 10,000 cases of influenza, enough to form ship’s companies for ten battlecruisers like HMS New Zealand. 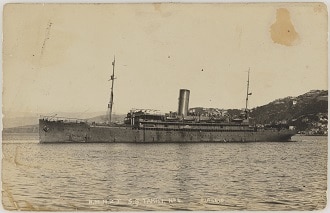 By the following month the virus was attacking on both sides of the Western Front. Fortunately for the British Expeditionary Force, exposure to this virus gave them a measure of protection when the virulent virus appeared in October which attacked the American, French, German, Austrian and Italian forces. Naval forces were not spared; influenza had spread to all navies by October.

Two tragedies related to the virus occurred at sea. HMNZT (His Majesty’s New Zealand Troopship) Tahiti departed Wellington on 10 July 1918, carrying 1109 officers and other ranks of the 40th Reinforcements. By mid August, the influenza outbreak had reached HMNZT Tahiti. More than 90% of the men caught the virus and 77 died a 6% death rate. The ship’s medical facilities were overwhelmed and it is amazing that more men did not die at sea. Most of the men who contracted influenza on the voyage were so unwell they needed extra recovery time in England before they were able to be deployed for active service.

On September 25th, Convoy HX-50 left New York with 20,000 American troops for the Western Front. All those on board had passed through camps on the East Coast which had influenza outbreaks. Two of the transports, Otranto and Kasmir, reported 100 cases and 300 cases on departure. By October 3rd, all sixteen ships in the convoy were burying victims at sea.  On October 6th, Kashmir and Otranto collided at sea in a severe storm. The inquiry found it was caused by the weather and the effects of influenza on the ship’s civilian crew. One hundred men on Otranto suffering from influenza were killed instantly in the collision. Many men suffering the effects were also drowned trying to get to safety on the escort HMS Mounsey. In total, 431 men lost their lives in the collision.

Closer to home, the Museum has identified three sailors who lost their lives in the pandemic. Lieutenant Philip Gannaway RNVR was serving with the motor launches when he died on 6 November 1918 and is buried in Wales. Sub-Lieutenant Errol Tylee RNVR serving in HMS Nairana died on 26 January 1919, and was buried in Edinburgh. Trimmer George West RNR was serving in HMS Actaeon when he died on 12 November 1918. He is buried in Hull in the North East of England. Estimates place the overall death toll across the world from the H1N1 Influenza Epidemic at anywhere from 20-40 million lives. Of these, the official number of New Zealanders who died including our troops overseas, was 8,573 from a population of 1,150,509.