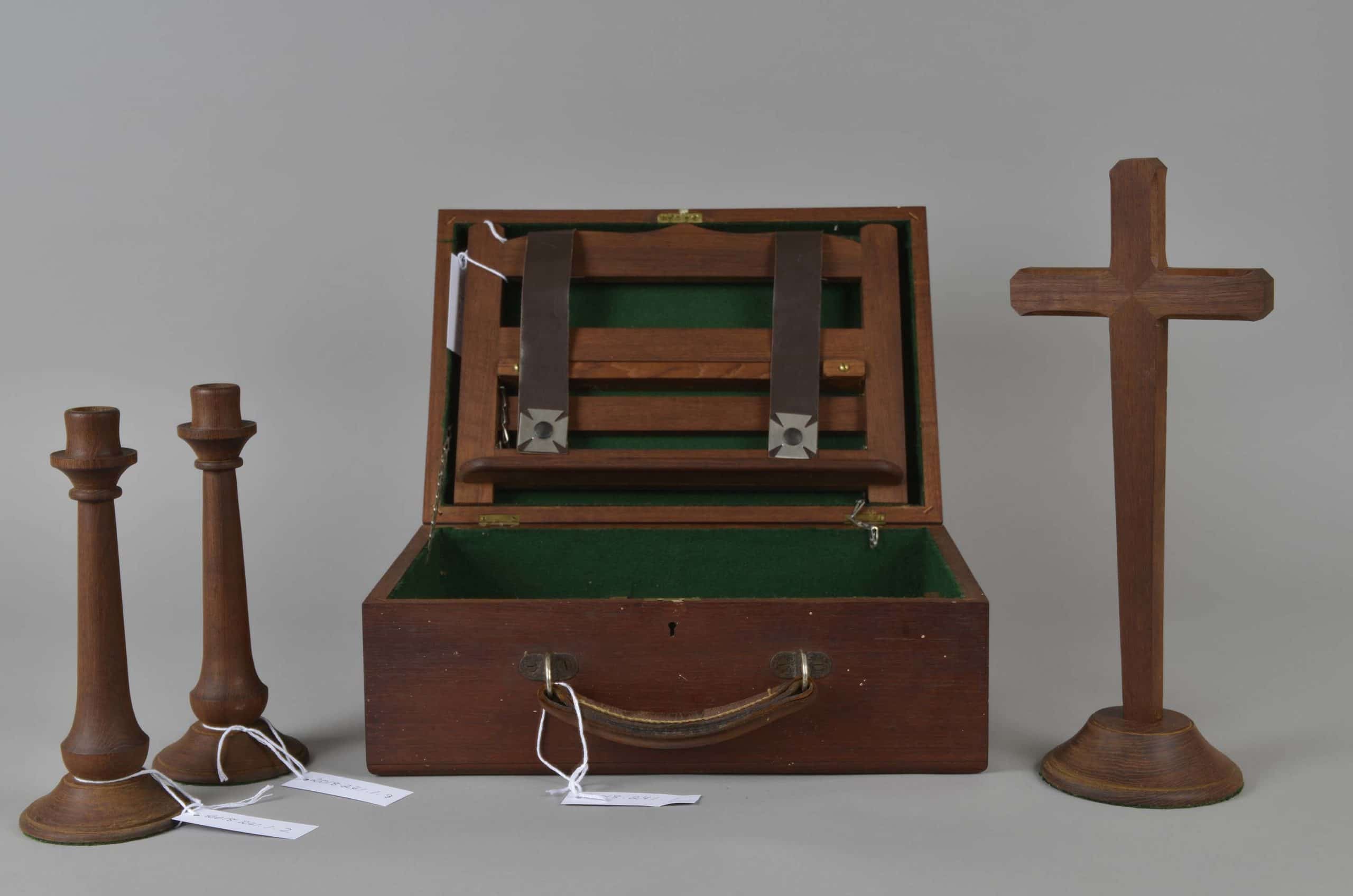 What at first appears as quite an ordinary box, is actually one of the items in the Navy Museum’s collection that represents a small but unique branch of the Navy; Chaplains. This wooden case contains a portable altar used at sea by Reverend Henry G. Taylor. It contains a crucifix with a stand, two candlesticks and a lectern. It was presented to Taylor as gift from the crew of HMNZS Bellona in 1951. Taylor served as a Senior Chaplain in the Navy from 1949-1968.

Unlike traditional clergymen, a Navy Chaplain is not always able to conduct services from a physical church but instead is required to operate on sea and land deployments. A portable altar was important in making anywhere into a temporary religious space to conduct services.

There is a long history of spiritual ceremonies being held on ships and early regulations of the Royal Navy stressed the importance of having a man of faith on board, especially to oversee burials at sea. Today, the role of a Navy Chaplain is more wide-ranging. Although Navy Chaplains are still responsible for religious and ceremonial services, such as baptisms, weddings, funerals, and ministry, they are also very involved in pastoral care to help nurture morale and wellbeing. Counselling and education are an integral part of the role of Chaplain. These responsibilities also extend to civilians on base and families of serving personnel.

Navy Chaplains have to complete five years of ministry before applying to the Navy. They then complete the Junior Officers Common Training course. Despite being non-combatants, Chaplains must still complete all aspects of training including weapon handling and pass all medial requirements to serve. Navy Chaplains do not have a rank and do not operate within the ranking system. Despite working in a highly hierarchal and status structured environment, Navy Chaplains assume the rank of whomever they are talking with in order to ensure easier communication and an equal accessible relationship to form with everyone. They are commissioned on entry but are always titled as Chaplain, not by rank. They have a unique rank badge, only worn by Chaplains of a stylised cross superimposed with a fouled anchor. Comparatively, it is only Navy Chaplains that are removed from the ranking system, their counterparts in the Army and Airforce do continue to have rank. There are currently 5 regular force Navy Chaplains serving on base and three reserve Chaplains. The current Principal Defence Chaplain is also Navy.

Objects relating to the work of Navy Chaplains were rather sparse in our collection. The portable altar came to our attention through a member of the public who spotted this interesting object in an antique shop in Paeroa where it was listed as a ‘Historical box’. It had been sourced for the shop in a job lot of collectables so it is unknown how it came to be there. The portable altar was purchased by the Museum to help fill the gap in our collection and to represent the stories of Chaplains in the Navy.

You can read more about Henry Gordon Taylor here: www.teara.govt.nz/en/biographies/5t4/taylor-henry-gordon