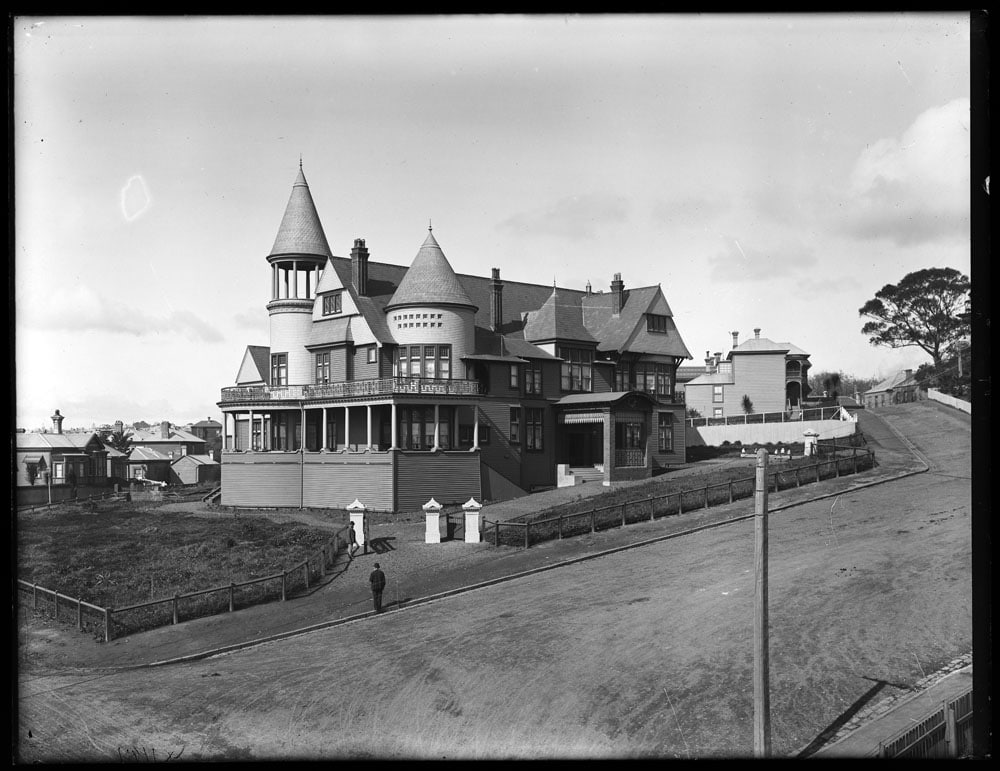 ‘Auckland’s White Elephant’ might bring to mind other more contemporary projects, but in fact this white elephant, built in 1902, was tied to the Navy. The turreted roof of Admiralty House – or more accurately, the “Admiral-less House” – can be seen on this postcard which recently came to light in our collection store.

Throughout the Commonwealth, Admiralty House is traditionally the residence for the top-ranking naval commander. In the case of Auckland around the beginning of the 20th Century, this would have been the Commander-in-Chief of the Australian Station, under whose command New Zealand fell.

Despite the fact that naval command visits to the city were infrequent, Auckland was keen to build an Admiralty House to try and entice the Commander-in Chief to make his home here – or at least a temporary home. The first such house was built in 1864 on the corner of Jermyn and Short Streets (then overlooking the harbour) for Commodore William Wiseman. However, Wiseman, who was based in Sydney, failed to show any interest in living in the building. Although it was initially used to house naval officers stationed in Auckland, the premises soon began to fall into disrepair and constant disagreements over who was responsible for the renovations of the house meant it was underutilised and eventually leased out to government departments.

By 1897, despite the problems with the first Admiralty House, a motion was raised by the Chairman of the Auckland Harbour Board, William Joseph Napier (later MP for Auckland as well as Captain of the Devonport Coastguard Artillery), for a new one to be built.

Napier sought the support of the Government and in 1898 The Admiralty House Bill was passed for the ‘establishment and maintenance of Admiralty House as a residence for the naval Commander-in-Chief of the Australian Station’. £1000 was granted to the Harbour Board to erect and maintain the building, who themselves supplied the land on the corner of Jermyn and Emily Place.

There were some delays in agreeing upon initial building design but eventually John Jenkin was contracted in 1901 to build the new Admiralty House for £4995. The foundation stone was laid on 28 August 1901 but the first murmurings that all was not right had already begun as in June that year Admiral Beaumont, Commander-in-Chief of the Australian Station at that time, declined to lay the foundation stone. He believed the Admiralty would not approve of the building, reasoning that “the officer in command of the squadron should remain on board ship when in port”. However the project pushed ahead and Admiralty House was completed in early 1902.

By this time however, “the Admiralty House farce [had] reached a more acute stage of mirthfulness”. Both Admiral Beaumont and his successor, Admiral Fanshawe, declined use of the house; Fanshawe “plainly and emphatically stated that he cannot live in Admiralty House himself, and that he does not see how the naval officer commanding on the NZ station could live there either”.

Fanshawe who visited Auckland in February 1903, said that “he did not want a mansion ashore…and while thanking the Harbour Board for their generosity (at the expense of the taxpayers) he said that it would be, “impossible for him to make use of the house…” as he did “not spent more than a few days a year in Auckland”.

“Alas! for the rose-coloured dreams of the optimistic promoters of this unconscionable architectural abortion… The Harbour Board is saddled with a worthless white elephant” .

As Admiralty House stood vacant, sardonic cartoons and acerbic letters littered the newspapers over the next few years, questioning the decision made by the Harbour Board to spend public money on an Admiralty residence unwanted by any Admiral.

A column in the Manawatu Evening Standard describes the Auckland Harbour Board as seeming to “have been principally devoted to squabbling and the inauguration of schemes of the most fanciful description” – a description that many would just as easily aim at councils and public bodies today! In 1903, the Harbour Board formally approached the Government to report that Admiralty House was not required and the Admiralty House Act was repealed on 11 November 1903.

Thoughts then turned to the future of the building. A number of suggestions were made as to how to “turn this picturesque white elephant into a useful beast of burden”. Suggestions included an infectious diseases hospital, a ministerial residence, and a “home for gentlewomen of limited means”, whose “culture and needlework… will adorn this handsome new building better than a lot of rough, seafaring sailors”. Eventually the Harbour Board accepted a tender of £312 a year for the lease of Admiralty House as a boarding house.

And so Admiralty House was renamed Glenalvon House and was at last was put to good use. However, it barely lasted a decade. In 1915, the City Council purchased Admiralty House from the Harbour Board to enable traffic improvements in the area; the building was demolished to allow for the realignment of Jermyn St which was renamed Anzac Ave. And so this white elephant no longer stands; its shameful legacy largely forgotten.