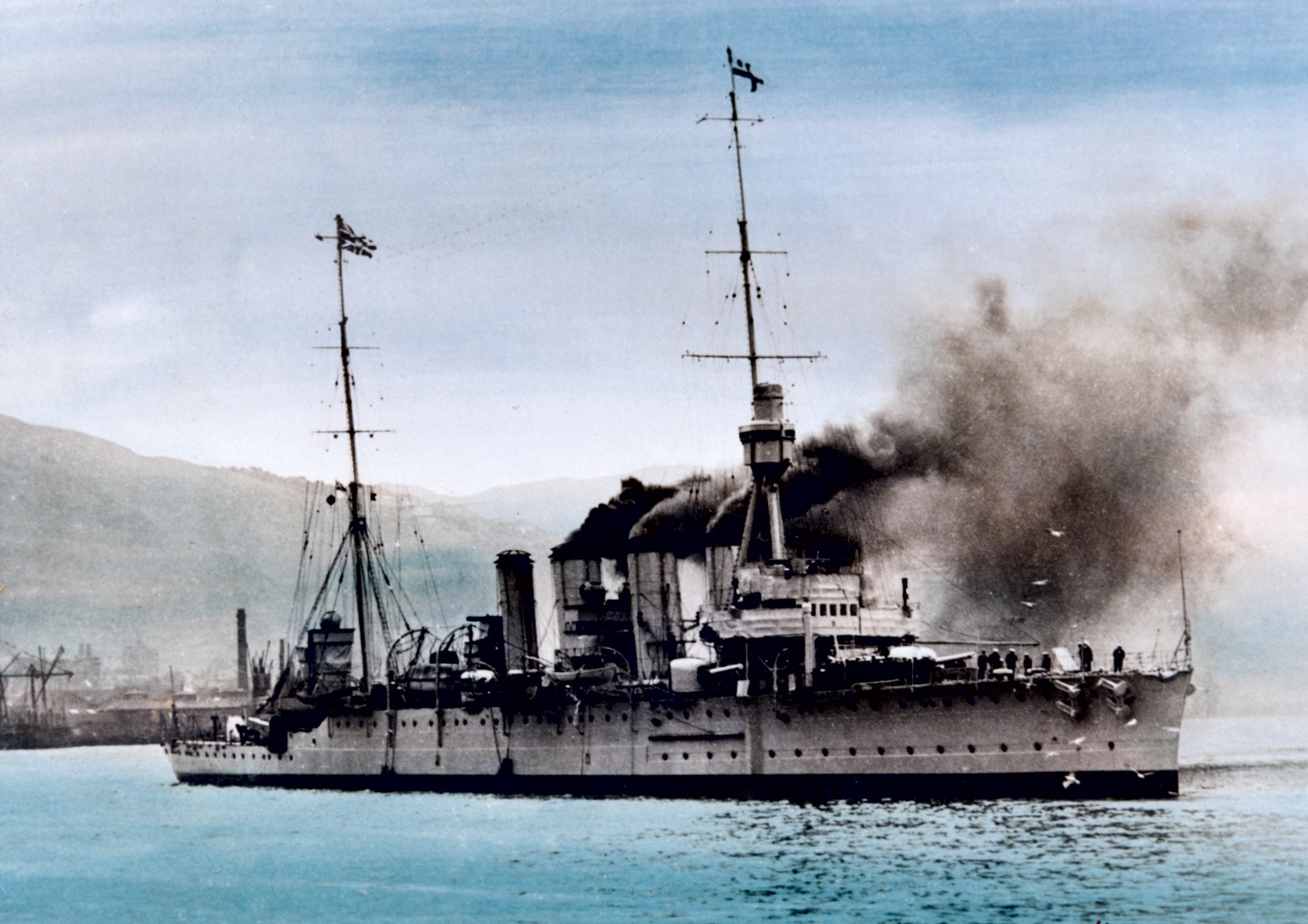 On 1 October 1920 HMS Chatham was commissioned into the New Zealand Naval Forces. Chatham was the name ship of type of 2nd-class light cruiser and was first commissioned on 3 December 1912. There were six ships in the class, three built for the Royal Navy and another three for the Royal Australian navy. Chatham came to New Zealand almost by default, it having been agreed earlier, that a more modem ship, HMS Canterbury be loaned, but that ship was oil burning and in 1920 there were no facilities for oil fuelling in the country.

At the outbreak of WW I Chatham was part of the Light Cruiser Squadron based in the Mediterranean. After service in the Red Sea she discovered the whereabouts of the German cruiser Konigsberg, up the Rufiji River in November 1914 and sank that ship’s attendant colliers to prevent its escape. She also captured a German merchant ship at this time. In May 1915 Chatham was employed in the Dardanelles campaign and was remembered by many New Zealand soldiers for this service. From 1916-18 Chatham was flagship of the 301 Light Cruiser Squadron with the Grand Fleet but was damaged by a mine on 26 May 1916, so missed the Battle of Jutland. After the Armistice the ship was placed in reserve until recommissioned for New Zealand.

It had originally been decided that the ship would be primarily manned by the Royal Navy, with personnel on loan to New Zealand, but when it came to actually implementing this, the Royal Navy was unable to provide the necessary personnel. The difficulty was overcome by New Zealand offering short term engagements (three years), which was very attractive to currently serving Royal Navy ratings who were dissatisfied with their conditions of service but still had some years to serve. By this means 293 ratings were recruited, comprising a nucleus crew for Chatham and also Philomel, the balance was made up by Royal Navy Ratings on loan and would eventually be completed by New Zealand recruits. Chatham was also the Flagship of the Commodore Commanding the New Zealand Station, Commodore A.G. Hotham.

HMS Chatham was officially commissioned for New Zealand service on 1 October 1920. The ship sailed from Chatham on 18 October 1920 and came to New Zealand via the Azores, West Indies, the Panama Canal, Mexico, San Diego, Honolulu, Fanning Island, Pago Pago, Apia and Suva. In each of the more attractive ports there were desertions, a total of ten during the voyage. Chatham arrived in Auckland on 26 January 1921, being met by the Governor General, sailing again later that day, for Wellington, where it arrived on 28 January.

In Wellington the main task was to make Philomel seaworthy again and steam that ship to Auckland, so that the task of training new recruits could commence. Philomel had been alongside since its return from the Middle East in 1917 and was in a sad state. When Philomel was moved from her berth to the slipway, Chatham’s first casualty of the commission was found. A young rating, Michael Cronin had been absent without leave, the belief being that he had ‘run’, however when the ship was moved his body was disturbed and came to the surface. It was apparent that he had fallen into the harbour and drowned. Philomel recommissioned on 1 March and on 2 April the two ships sailed for Auckland, arriving there on the 5th.

Under Commander John Walsh, new recruits were entered into Philomel and training began in earnest. This freed Chatham to undertake other duties, although it remained undermanned for the remainder of its time in New Zealand. After a couple of weeks exercising in the Hauraki Gulf, the ship commenced its first New Zealand cruise in May, calling at seven ports before returning to Auckland at the end of June.

On completion of a short maintenance period and docking, Chatham sailed for a series of visits to Pacific Islands in July. Embarked as additional watchkeepers for this cruise were Lieutenant Commander David Boyle and Lieutenant Eric Rhodes, both recently retired from the Royal Navy. One of the more memorable events of this cruise was the visit to Lautoka in September, where the Commodore was presented with a ‘Tabua’ (whale’s tooth), a gift of great significance that is now in the Navy Museum. During the return passage to Auckland the ship spent three days at Raoul Island, taking on board the survivors of the Colombia River, which had been wrecked there on 5 September.

Having spent just over a month in Auckland Chatham went to Wellington where it remained for the rest of the year. The ship’s company, in addition to the routine maintenance of the ship, undertook their annual range course at Trentham. The year 1922 began with exercises in the Hauraki Gulf, followed by another New Zealand cruise, during which their Excellencies the Governor General and Lady Jellicoe embarked in the ship for a visit to the Chatham Islands. In the later part of the year another islands cruise was commenced, but was cut short by an outbreak of cerebrospinal meningitis on board and the ship spent a month in quarantine at Motuihe Island, the ship’s company living ashore while the four sick men remained on board.

1923 was very much a repeat of 1922, with a New Zealand cruise in the early part of the year and an island cruise in the later half. Two more tragedies occurred amongst the ship’s company when Stoker Doran was found dead on a railway line on New Years Day and Officer’s Cook Chinnery was found drowned on Devonport Beach in February. The ship was back in Wellington for the annual range course at Trentham in November, but went to Auckland for Christmas. At this time the ship had a good concert party and while in Wellington in November mounted a show which was attended by the Governor General.

After a short shakedown in the Hauraki Gulf Chatham sailed to Wellington before undertaking a short New Zealand cruise. While there a party of stokers went on a pleasure cruise on the harbour with a family group and friends. When the launch was returning about midnight, it collided with a ferry, throwing the passengers of the launch into the water. Two of the stokers rescued one of their shipmates and a Wellington girl. Two other girls were drowned.

Chatham returned to Wellington on 19 April and a few days later, the Royal Navy Special Service Squadron, led by the battlecruisers HMS Hood and Repulse arrived. Before they departed a regatta was held, in which the Chatham cutter crew won the Frobisher Cup. The Squadron arrived at Auckland on 9 May and on the following day the New Zealanders in the ship’s company transferred to HMS Dunedin, which had arrived with the Special Service Squadron. HMS Chatham went out of New Zealand service on 10 May 1924, without ceremony. The ship sailed from Auckland with the Special Service Squadron on 27 May taking with her the first 35 New Zealand ratings for advanced training in England. Chatham then became Flagship of the 4th Light Cruiser Squadron of the East Indies Fleet until November 1925, when it was finally paid off in England and was sold for scrap the following year.

Before leaving New Zealand service the ship’s company of Chatham made a permanent contribution to the country. From their own funds they presented the ‘Chatham Cup’ for Association Football, which is still the premier trophy for soccer in this country.

The name of a city south east of London.

During the First World War the badge of HMS Chatham, comprised the Arms of the city of Chatham, but no badge was officially registered post war, probably because at the time this was being done in the Royal Navy, the ship was then serving under the New Zealand Government.

Sometime later the Chatham Old Boys Association produced a lapel badge within the naval surround showing the detail from the shield of the Arms of the Borough of Chatham.  During 1958-59 the Naval Board were assembling a set of boats badges for the Board Room and sought an example of the badge of HMS Chatham The Admiralty advised that there had been no badge registered for the ship, but a coloured drawing of one was hanging in the cafeteria of HMNZ Dockyard, which had been present by Captain T.H.B. Shaw RN, in 1956 when he was Captain Superintendent of the Dockyard Little information could be ascertained about the origin of this thawing except that Captain Shaw is believed to have obtained the details from the UK.  In 1986 the Royal Navy allocated the name Chatham to a new ship and although based on the Arms of the Borough, a very different badge was designed and approved. The central device of the new badge comprises a trident and laurel wreath taken from the detail of one of the features.