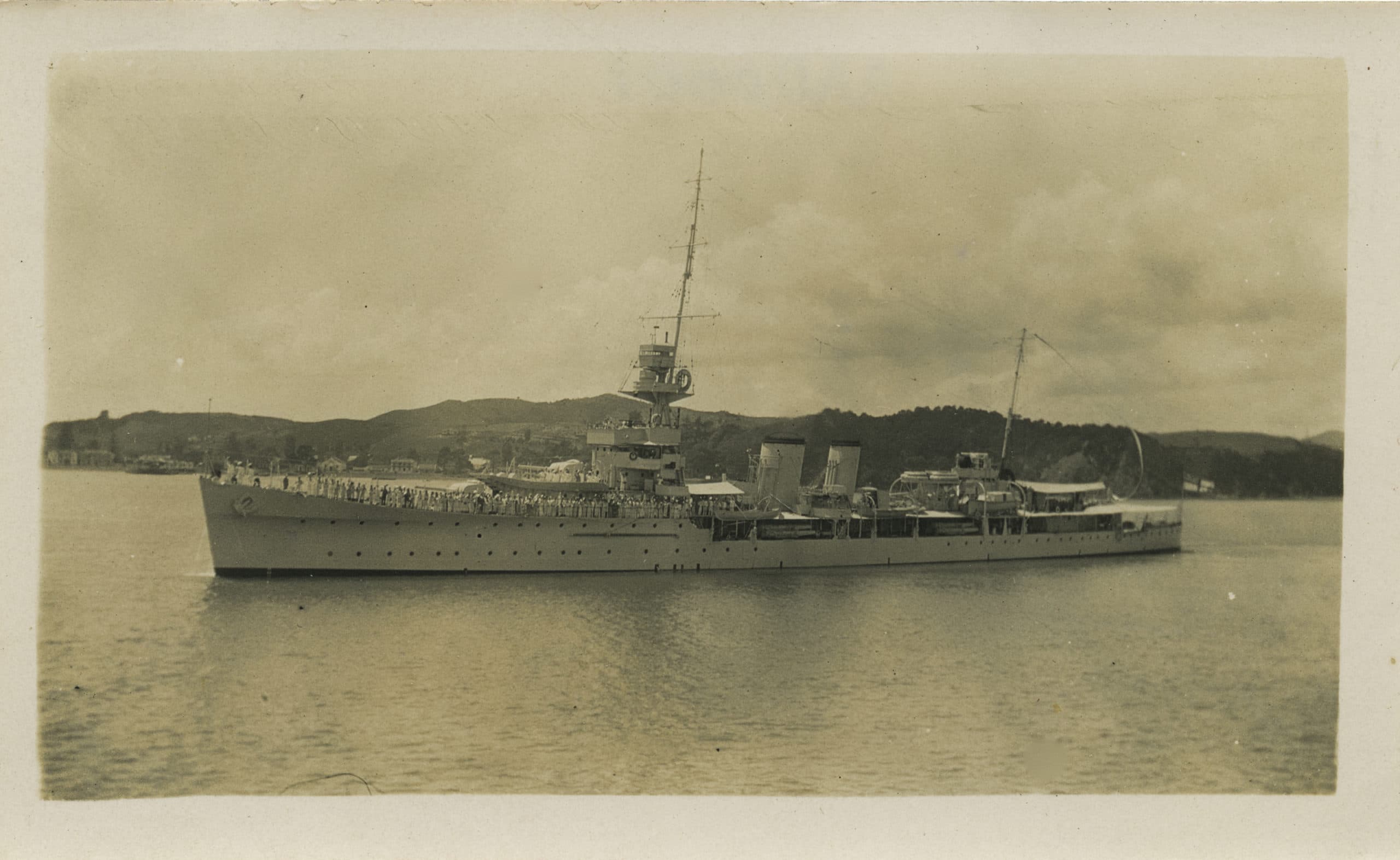 The D-class cruisers were wartime construction in response to a reported German cruiser that was better than the C-class cruisers then in commission.

The D-class cruisers were wartime construction in response to a reported German cruiser that was better than the C-class cruisers then in commission. Eight ships would be built of this class. HMS Dunedin was laid down in the Armstrong Withworth shipyard in November 1917 and commissioned in October 1919 at the HM Dockyard Devonport. She joined the 1st Cruiser Squadron in 1919. In April 1924 Dunedin arrived in company with her sister ships HMS Delhi, Dragon, Danae, and Dauntless along with the Royal Australian Navy cruiser HMAS Adelaide, and the battlecruisers HMS Hood and Repluse as part of a special Royal Navy Special Squadron that had been operating in the Indian Ocean.  When the Squadron departed, Dunedin remained. In 1924, the cruiser HMS Chatham was in need of replacement and it was agreed with the British government that New Zealand would take over two cruisers one of which was Dunedin and the other HMS Diomede.

On 10 May 1924 Chatham relinquished the duty as flagship of the New Zealand Station to Dunedin which had arrived from Sydney. Chatham, being coal fired, was easily supplied for operations but the new cruisers were oil-fired and facilities were limited on shore. As a result, tanks were constructed at the naval base at Devonport in 1924-1925. In addition, the RFA tanker Nucula was supplied to the NZ Division of the Royal Navy to maintain supplies of fuel oil for the cruisers while they undertook their Pacific cruisers, a feature of peace-time operations in the inter-war period. Essentially the routines and duties that had been established by Chatham were continued. Dunedin brought along with her a complement of Royal Marines, the first time they had served in New Zealand.

In 1928 with the outbreak of a ban on European stores in Samoa led by the Mau movement, the New Zealand government was asked to send warships to assist the colonial administrators. This request was granted in February 1928. Royal Marines from the cruisers HMS Dunedin and Diomede were to help to enforce laws prohibiting Mau activities and assist in making arrests. The cruisers duly arrived in Apia on 21 February 1928. Once ashore the Marines and sailors began to arrest Mau supporters on the 24th.  With the show of military force on 15 March General George Richardson tabled the Maintenance of Authority in Native Affairs Ordinance.

Dunedin also carried a Gypsy Moth seaplane to assist in the search for Mau supporters. This was the first operational deployment of the newly formed New Zealand Permanent Air Force based at Hobsonville. The pilot Flight Lieutenant S. Wallingford and two ground crew accompanied the aircraft. It took some time to be active as the humidity and a tropical downpour caused engine malfunctions. The first operational flight was taken on 16 January 1930 by Flight Lieutenant Sidney Wallingford. Wallingford flew two patrols a day to look for Mau members in the bush around ‘Upolu. The aircraft was fitted with a wireless set for sending messages to HMS Dunedin in Morse code. 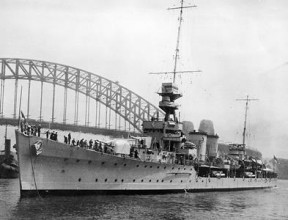 Up to 1500 Mau men took to the bush. They were pursued by an armed force of 150 marines and seamen from HMS Dunedin and 50 military police.  As the mission wore on sailors and marines were put into the jungle with bandoliers of ammunition, food for 24 hours, rations, medical kit, water bottles, tropical and steel helmets and a service rifle and bayonet. The Mau remained in simple bush camps, moving ahead of the cumbersome forces. There was no intent on the part of the Mau to stand and fight with the naval party. They would use the rugged interior of the island to control the scale of the conflict. In late January policemen along with sailors raided Fasito’outa and a young man was shot and wounded by policeman Lance Corporal Ricketts. The teenager died in hospital a few days later. After a long and sometimes bitter discussion, a group of wanted men surrendered to the police that afternoon.  Around 400 chiefs and leaders were taken into custody.  As a gesture to the Samoans, HMS Dunedin returned to New Zealand on 12 March. She had 61 men of her ship’s company listed as sick. The seaplane was rendered unusable and was disposed of.

Shortly before the 1930 London Naval Conference it was arranged that Dunedin & Diomede would be replaced by two light cruisers of the Leander-class that were about to begin construction.

After the earthquake had struck Napier, the sloop HMS Veronica was able to send a radio message to Auckland requesting supplies. By 3pm that afternoon, the cruisers HMS Dunedin and HMS Diomede were loaded with emergency supplies including 54 stretchers, 5 marquees, 34 tents, 400 naval blankets, 125 seamen’s beds, 200 ground sheets, 80 shovels and 31 picks.  Aboard with the ships’ crews were 11 doctors and 17 nurses.  Travelling at full speed (24 knots) down the coast, Dunedin and Diomede made best speed to Napier arriving at 8:30 the next morning. The destruction they found at Napier was devastating.  ‘Well it just looked like pictures I had seen of the First World War, of a town that had been bombed, it was mostly flattened, and burnt out.  There were [only] a few wooden houses [standing],’ describes Stanley F. Parslow, who was serving as a stoker on the Dunedin.  The crews joined the relief teams that had been at work for nearly 24 hours.

The Navy took charge of clearing streets and breaking down precarious remnants of buildings.  They aided in the recovery of bodies.  Others took up jobs to help support the stunned survivors.  The town was searched for food and supplies.  Food depots were set up in schools around the city, a telegraph station at the Hastings Street School, medical tents and make-shift shelters with ground cloths along the Marine Parade.  Says one survivor, Agnes Bennett:

It was a pleasure to see the tents being set up with military precision – marines and bluejackets were in evidence and a good fire and a big oven gave promise…  Volunteer workers were busy and the Nelson Park camp was the most promising bit of organising that one had seen.  The dull expressionless faces were disappearing and life and interest had begun to return.

The evacuation effort progressed steadily.  By 7 February nearly 5,000 people were evacuated, some by ship, some by car, and others by train.  Fires continued to threaten the town through the evening of the 5 February and the aftershocks continued on for many days. 258 citizens of Napier were killed in the earthquake.

Some of Napier’s services were restored very quickly: power was restored late on the 4th, a water treatment plant was set up on the 5th, and the first train was able to reach Hawke’s Bay on the same day.  All this made relief and evacuation easier, but by no means put Napier back on its feet.  Hastings and Wairoa had also been very badly damaged. In the end, the death toll reached 258, with 162 dead in Napier, 93 in Hastings and 3 in Wairoa. The naval chaplain from HMNZS Philomel, Reverend G.T. Robson (“Padre Robbie”) conducted a funeral service at the common grave, where many of the dead were buried together. It is to this day New Zealand’s heaviest hitting natural disaster. On the morning of 10 February, with the groundwork for recovery established, Veronica left Napier for Auckland.  Dunedin and Diomede left on the same evening.  Napier would be reconstructing for another thirty years, through which time it gained new character and livelihood.  The service offered by the Royal New Zealand Navy in those first few days was never forgotten.

After service at the Napier earthquake Dunedin departed New Zealand for Britain to undergo a 17-month long refit. She returned in late 1932 with new weapons and RN personnel to complete a tour of duty on the New Zealand Station. She resumed Pacific cruises and service in New Zealand waters [see below for the 1933 cruise]. In June 1931 the Admiralty advised that the loan of the two Leander-class cruisers would not be practicable in 1934 so the New Zealand Division was asked to retain Dunedin & Diomede until they would be replaced in 1939-1937.

In 1937 Dunedin was ordered to return to Britain and she left Auckland on 15 February, arriving at Portsmouth 29 March 1937. She was paid off on 30 April 1937 going into refit and her ship’s company helped in commissioning the cruiser HMS Leander into New Zealand service. She formed part of the fleet for the 1937 Coronation review of King Edward VIII. She was then used as a training ship for seaman boys from November 1937 as well as being in reserve.  By mid 1939 all the D-class cruisers in service were due for a major refit and repairs but with the outbreak of the Second World War, Dunedin was assigned to the fleet for active service despite the obsolescence of her guns and design as any warships were badly needed.

In September 1939 Dunedin was part of the 11th Cruiser Squadron of the Royal Navy’s Orkneys and Shetland Command. She spent the rest of 1939 on the Northern Patrol. In 1940 she was assigned to the American and West Indies Station. At this time the station was a perceived as a backwater in the naval war and she could be spared for operations there freeing up more modern warships for more important theatres. Her time on station dispelled that perception. In March 1940 she sank to German merchant ships in the Windward Passage. In June-July 1940 she blockaded the Vichy French colony of Martinique. In December she formed part of a escort for convoy WS5a at the time of the attack by Admiral Hipper but she did not get into action.

In 1941 she was operating on the South Atlantic Station with her sister ship HMS Dragon despite boiler defects that limited her speed. On 15 June she captured the German vessel Lothringen in the central Atlantic following the Bismarck operation. Seven days later she captured a French Vichy vessel Ville de Rouen off Natal. On 30 June she captured another Vichy French vessel Ville de Tamative east of St Paul’s Rocks. She was supposed to have been sent to the United States for a major refit and conversion as an anti-aircraft escort as her sister ship HMS Delhi had been but the Japanese attack on Pearl Harbour put paid to any plans and she remained as she was. At 1226 November 28 1941 she was sunk by a torpedo from U-124 in the mid-Atlantic 900 west of Freetown while on a lone patrol. Over 300 men were lost and 72 men were rescued by an United States merchant vessel three days later.

This cruiser’s name comes from the Gaelic for the city of Edinburgh. Because of Dunedin’s strong links to Scotland, the badge which was designed by Major ffoulkes took its central device from the Arms of the City of Dunedin. This ship’s badge was one of the first officially recognised when formal registration of ships’ badges commenced after the First World War.

Nisi Dominus Frusta (Without the Lord in Vain)