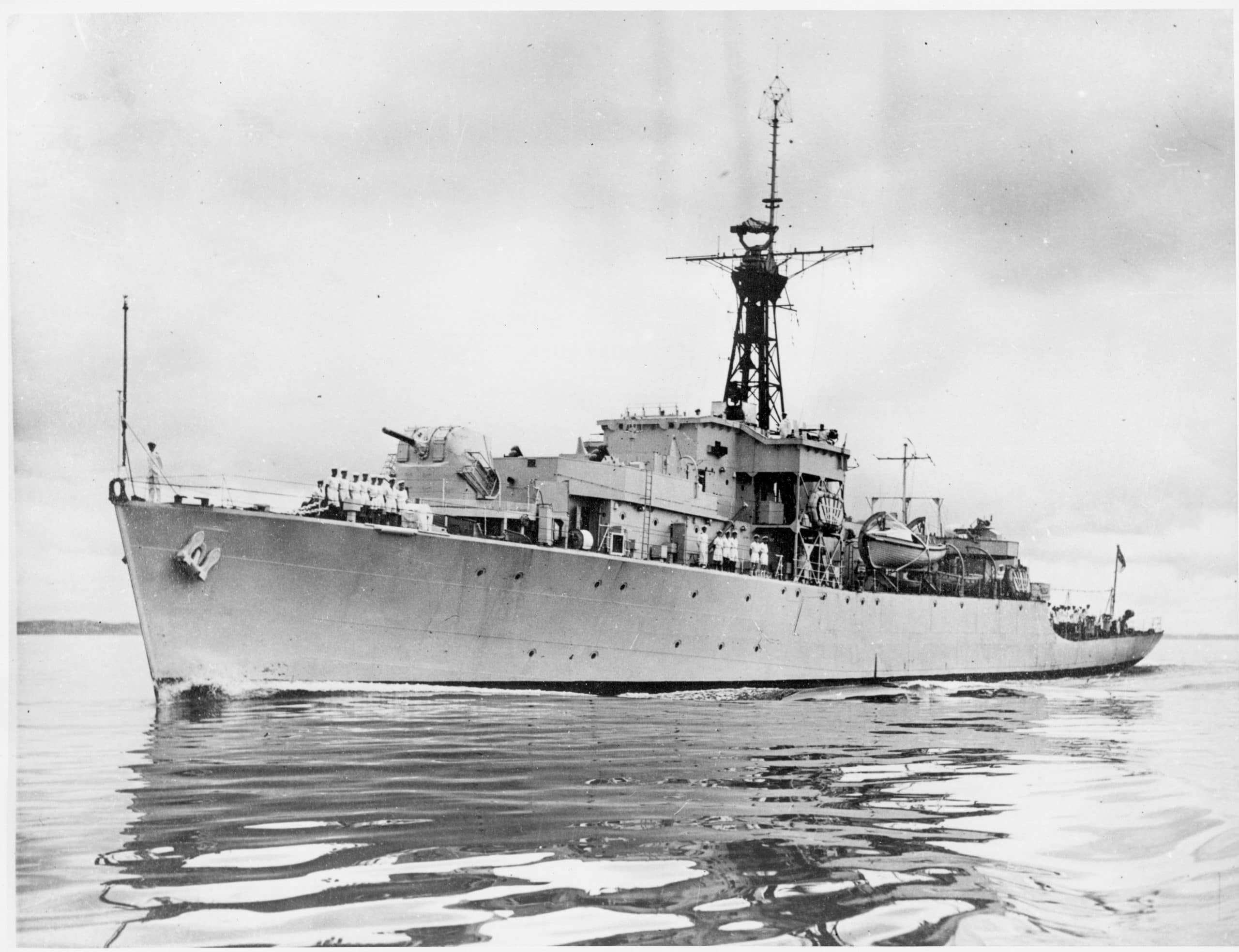 HMNZS Taupo was renamed from HMS Loch Shin which was built by Swan, Hunter & Wigham Richardson River Tyne. She was laid down on 6 September 1943, launched on 23 February 1944 and completed by 10 October 1944. With the outbreak of the Waterfront strike in 1951, Taupo was deployed to Westport from March to June. The ship’s company manned the wharves and operated the coal mines.

This class was developed from the slightly smaller River-class frigates. These ships were designed for mass-production to provide ships for convoy escort and anti-submarine in the Atlantic. Some Loch-class frigates were modified to Bay-class Anti-aircraft frigates.  HMNZS Taupo was renamed from HMS Loch Shin which was built by Swan, Hunter & Wigham Richardson River Tyne. She was laid down on 6 September 1943, launched on 23 February 1944 and completed by 10 October 1944. Her Pennant number in Royal Navy service was K421.

HMS Loch Shin was deployed to protect the convoys using the North Atlantic approaches to Britain. In 1945 she was assigned to protect Russian convoys to Murmansk. On 29 April 1945 during one voyage with the convoy she accounted for one U-boat and helped another frigate sink a second U-boat. At the end of the war Loch Shin was placed into reserve.

The New Zealand government needed to replace it cruisers with other naval vessels. In late 1947 seven frigates were sought from the Royal Navy’s Loch or Castle class vessels. In 1948 the purchase of six Loch-class frigates was approved. HMS Loch Shin was taken into RN Dockyard at Chatham for a refit. The ships were brought out of reserve, modernised, had armaments replaced and prepared for RNZN requirements. The initial ship’s companies for these frigates come from HMNZS Arabis and Arbutus which had been returned to the Royal Navy in 1948.  In August 1948 the six frigates were named as the 11th Frigate Flotilla with the Senior Officer aboard Taupo which was commissioned into RNZN service on 13 September 1948.

In March 1949 the flotilla was reorganised and the Senior Officer transferred to the cruiser HMNZS Bellona. The frigates undertook voyages to the Pacific Islands and around New Zealand ports. With the introduction of Compulsory Military Training they were used for the trainees that chose to serve with the RNZN. IN 1950 the RN undertook an exchange programme with the RNZN. In April 1950 Taupo and her sister ship HMNZS Hawea went to serve with the Mediterranean Fleet at Malta. The RN sent two Bay-class frigates HMS St Austell Bay and HMS Veryan Bay to New Zealand. Taupo and Hawea returned to New Zealand in November 1950.

With the outbreak of the Waterfront strike in 1951, Taupo was deployed to Westport from March to June. The ship’s company manned the wharves and operated the coal mines.  There is a carving in the Museum’s collection of a sailor pushing a coal cart that was given to the men in appreciation of their help.

As part of New Zealand’s commitment to the United Nations fleet operating off Korea, all six of the Loch-class frigates were deployed to Korea. Taupo departed New Zealand on 29 August 1951 and returned on 21 October 1952.  While on operations, Taupo was engaged with North Korean forces trying to invade Yang-Do Island. In the early morning of 20 February 1952 a fleet of fifteen sampans was spotted trying to land on the island. Taupo moved to attack the sampans sinking ten and driving the rest off.

Unfortunately this almost proved her undoing as the North Korean shore batteries had the range and began to straddle the ship with their salvos.

Chief Petty Officer Mason-Riseborough was the Chief Boatswains Mate was aboard Taupo and remembers the event:

We suddenly became a very enticing target for the shore batteries that commenced to do their best to put us under.  Their firing was pretty accurate.  The first lot being a straddle, as I remember.  Of course the Captain naturally said “full speed ahead of everything” and let’s get the hell out of this fast.  We wiggled and wound our way out while Lieutenant Saull had a bash with the old 4 inch at the shore batteries and we got out of there as quickly as we could.  However we had sustained some small damage, around about the water line which was causing water to enter the engine room and we went around the other side of the island well out of sight of the shore batteries.

By 1953 Taupo was in reserve being paid-off on 26 January 1953. She remained at HMNZS Philomel alongside as an engineering training ship through until the 1960s. All six Loch-class frigates were sold for breaking up between 1961 and 1967. Taupo left Auckland on 18 October 1961 for Hong Kong where she was broken up.

This was badge was approved in February 1951. The canoe is intended to represent Te Arawa. The red back ground represents the region of Taupo as one of New Zealand’s volcanic zones.