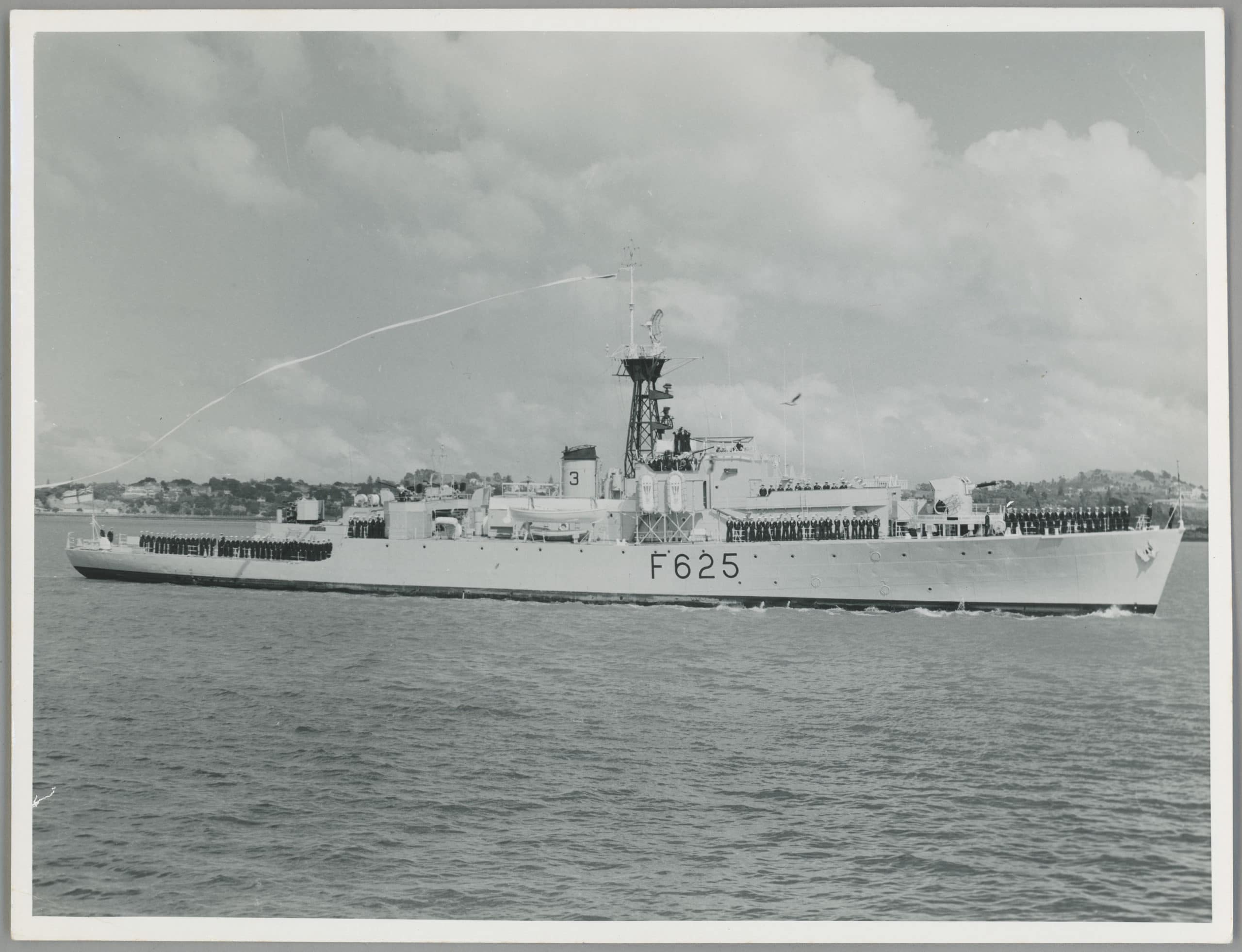 HMNZS Rotoiti was handed over to the RNZN at Portsmouth and entered service with the RNZN on 6 June 1949. Rotoiti completed two tours off the Korean Peninsula – October 1950 to November 1951 and January 1952 to March 1953. Her duties consisted of providing shore bombardments, patrolling and landing raiding parties, including one in August 1951 when two prisoners were captured.

This class of frigate was developed from the smaller River-class frigates and designed for mass-production techniques for anti-submarine convoy protection. Some Loch classes were modified into AA frigates.

Rotoiti was launched as HMS Loch Katrine and was completed in December 1944. She was sent to the British Pacific Fleet in 1945 and saw service there until the conclusion of the Second World War.

In 1947, the RNZN sought seven frigates from the Royal Navy. In 1948, six frigates were approved for purchase at a bargain price of £1,500,000. The frigates were brought out of reserve and modernised and fitted for service with the RNZN. The initial crews came from HMNZS Arbutus and Arabis, which had been returned to the Royal Navy. The RNZN formed the 11th Frigate Flotilla upon receiving the vessels.

HMNZS Rotoiti was handed over to the RNZN at Portsmouth and entered service with the RNZN on 6 June 1949. The government had thought of calling the frigate HMNZS Tarawera. During the process of making up the cap tallies the name was misspelled as HMNZS Rotoite. The ratings in the commissioning ship’s company had to wear these until they were later changed. [2]

In June 1950, at the outbreak of the Korean War, the government committed two frigates to the United Nations combined fleet. Rotoiti completed two tours off the Korean Peninsula – October 1950 to November 1951 and January 1952 to March 1953.[3] Her duties consisted of providing shore bombardments, patrolling and landing raiding parties, including one in August 1951 when two prisoners were captured. Sadly, another raid cost the life of a rating, the only RNZN casualty in combat. In 1952, in thick fog, Rotoiti collided with a Netherlands destroyer off the coast of Korea with some damage to both vessels. Rotoiti was paid off into the reserve after her return from Korea.

In contrast to these war-like operations, in 1951 Rotoiti was instrumental in retrieving a merchant ship which had been captured by pirates. Rotoiti was off the coast of China while on her way home when a distress signal was received from a British merchant ship, SS Hupeh. This ship had been attacked and captured by pirates. Any hostile act on the part of Rotoiti would have resulted in the murder of the crew and passengers of the Hupeh, so Rotoiti took up a shadowing position. Eventually the pirates offered to leave the ship and its passengers unharmed if they were promised safe custody to a nearby island. With the safety of lives of the greatest importance, this proposal was agreed. The incident ended peacefully.

In 1954 a refit was undertaken and Rotoiti was recommissioned in February 1957.

In 1957, Rotoiti, in company with HMNZS Pukaki, participated in Operation Grapple, the series of nuclear tests carried out by the British at Christmas and Malden Islands. Her duties were to act as a weather ship and also to observe the tests. Rotoiti also undertook tours on the Far East Station between 1958 and 1961. One of the duties was to maintain the ceasefire of the Korean War.

In 1961, as part of Operation Deep Freeze, Rotoiti was fitted out as a weather picket ship and to act as a Search and Rescue (SAR) vessel for American aircraft flying between Christchurch and McMurdo Sound in Antarctica. She undertook seven tours of duty (consisting of 10–12 days on station), during the summers of 1961, 1962 and 1963. This hard work in the Southern Ocean took a great toll on the vessel and her hull was in bad shape after the final tour in 1963.

On 6 August 1965, HMNZS Rotoiti was paid off from the RNZN. She was sold for breaking up in September 1966 along with the Kaniere and left Auckland in January 1967 for Hong Kong, where she was broken up.

The ship’s badge was approved by the Naval Board in February 1951. The flower is Akatea metrodiseros albiflora. The motto is taken from the Mᾱori proverb Rangitihi Upoko I Takaia ki te akatea ‘Rangitihi’s head was bound up with the akatea’.