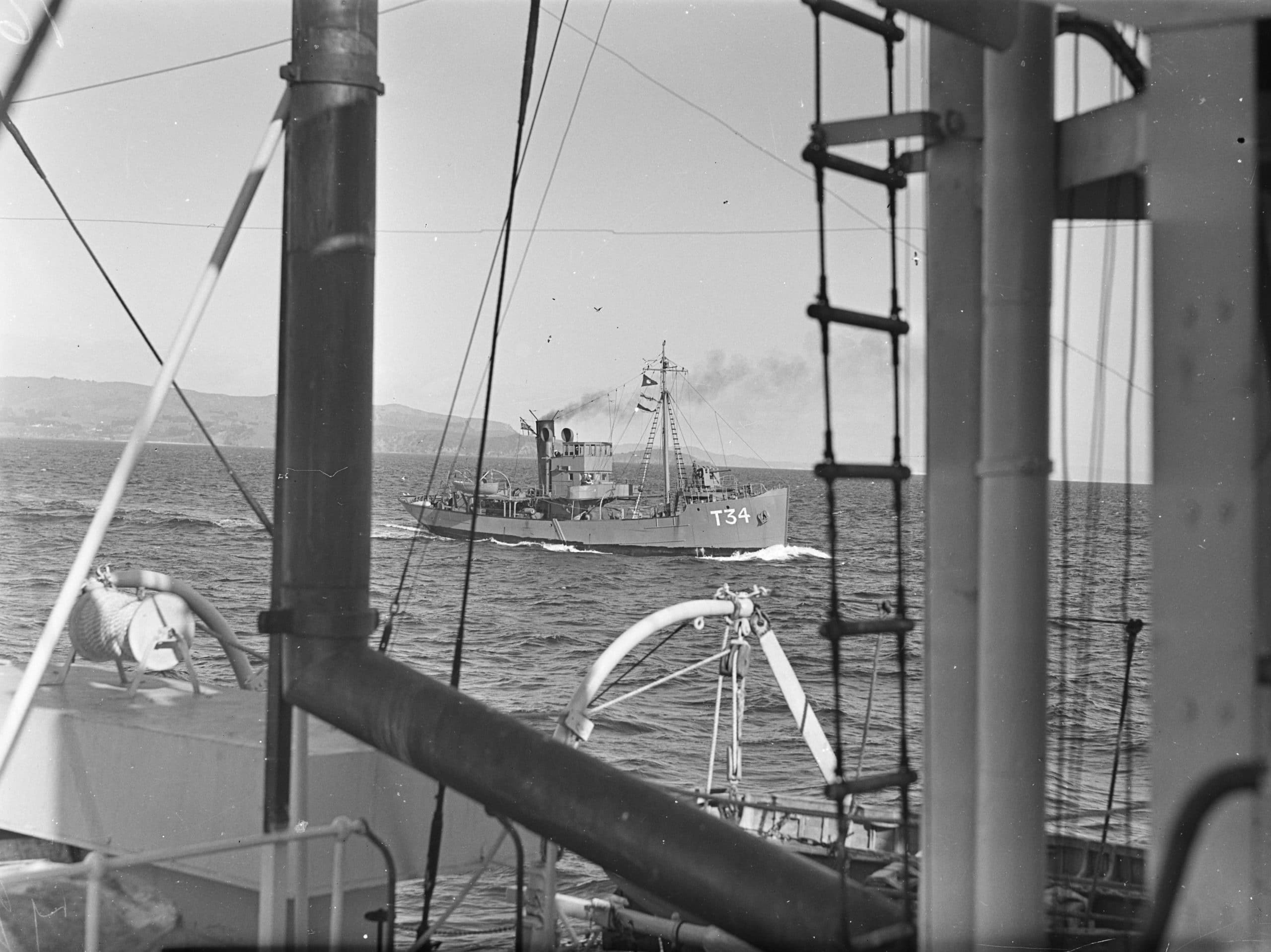 HMNZS Waiho was commissioned into service with the RNZN on 3 June 1944. She formed part of the 194th Auxiliary Minesweeping Group.  Her duties included gunnery, depth charge, and anti-submarine drills and exercises. Daily sweeps of the port entrance channels to the Waitemata Harbour were carried out.

The designs for the Castle-class minesweepers were based on a commercial trawler taken up for service by the Royal Navy in 1915. Between 1916 and 1919 200 of this type of minesweeper were built. Two served with the New Zealand Division as HMS Wakakura and James Cosgrove. In 1940 facing a requirement for minesweepers to operate in home waters, the New Zealand government chose this design as it was simple enough to be built with the country’s limited ship construction facilities. The steel-hulled minesweepers were given New Zealand river names. The Waiho River in Westland on the west coast of New Zealand’s South Island.

The minesweeper was laid down at Stevenson & Cook Engineering at Port Chalmers. Launched on 19 February 1944, HMNZS Waiho was commissioned into service with the RNZN on 3 June 1944, the last of her class to be commissioned. Unfortunately on the very day she was commissioned she went aground for two hours in Port Chalmers. She was towed off successfully suffering a twisted rudder and popped rivets.

Waiho was to be based at Auckland as the port minesweeper and arrived to begin her service on 29 June 1944.  She formed part of the 194th Auxiliary Minesweeping Group.  Her duties included gunnery, depth charge, and anti-submarine drills and exercises. Daily sweeps of the port entrance channels to the Waitemata Harbour were carried out. For excitement to this mundane routine, the minesweepers would exercise with submarines and warships that visited Auckland as well as providing an escort.  On 2 September 1944 while berthed at HMNZS Philomel, Waiho was struck by HMNZS Tui.

During a typical day, Waiho would leave her anchorage at Urquharts Bay in Whangarei Harbour at 0700 and carry out sweeping operations for up to twelve hours. The minesweeper often spent the night at one of four anchorages that were located off Great Barrier Island.

The minesweepers usually worked in a team of six or eight ships, side by side, in an area up to twenty miles out to sea. There was no room for error if their kilometre long trailing cables were not to tangle. And they had to sweep and note the area correctly. If a mine was hooked the vanes at the end of the cable automatically cut the mine’s cable.

When each area was swept a row of dan buoys was laid to show the zone cleared. The last row of buoys was left to show them where to start next morning. The area was swept continually after RMS Niagara was sunk off Whangarei Heads in June 1940. It was then realised that German raiders had laid huge minefields at harbour entrances all around New Zealand and constant minesweeping to keep them clear of mines.

In 1945 Waiho was detailed to replace HDML 1183 at Dunedin in November 1944 but was not sent. However, in June 1945 she was sent to Lyttelton. While there she carried out regular minesweeping patrols and dumped at sea old ammunition.  She departed Lyttelton on 1 September 1945 arriving in Auckland on 4 September. She was converted to a danlayer in September along with sister ships HMNZS Waima, Waipu. The unit was designated as the 25th Minesweeping Flotilla and was tasked with conducting a final sweep of the Hauraki Gulf.

While HMNZS Kiwi, Arbutus, and Arabis deployed as minesweepers, Waiho served as a danlayer. Work on minesweeping was halted in October 1945 as there was insufficient coal available for the three Caste-class boats. The minesweeping programme was resumed in March 1946 with guaranteed supplied of coal on hand for Waiho and her sister ships.  The deployment was completed on 4 June 1946 and all the vessels with the exception of Arbutus were paid off on 24 July 1946.

In May 1946 Waiho and Waima were sold to Red Funnel Trawlers Pty. Ltd in Sydney.  The ship was renamed by her new owners Matong ON 178379. Waiho was delivered to Sydney in September by the Marine Department steamer Matai arriving 12 September.  Matong began fishing in June 1947.  By December 1958 Matong was laid up and in 1963 was sold for breaking up in Singapore which was carried out between 1964-65. It was said that a portion of Matong’s double bottom survived for some time as a pontoon.