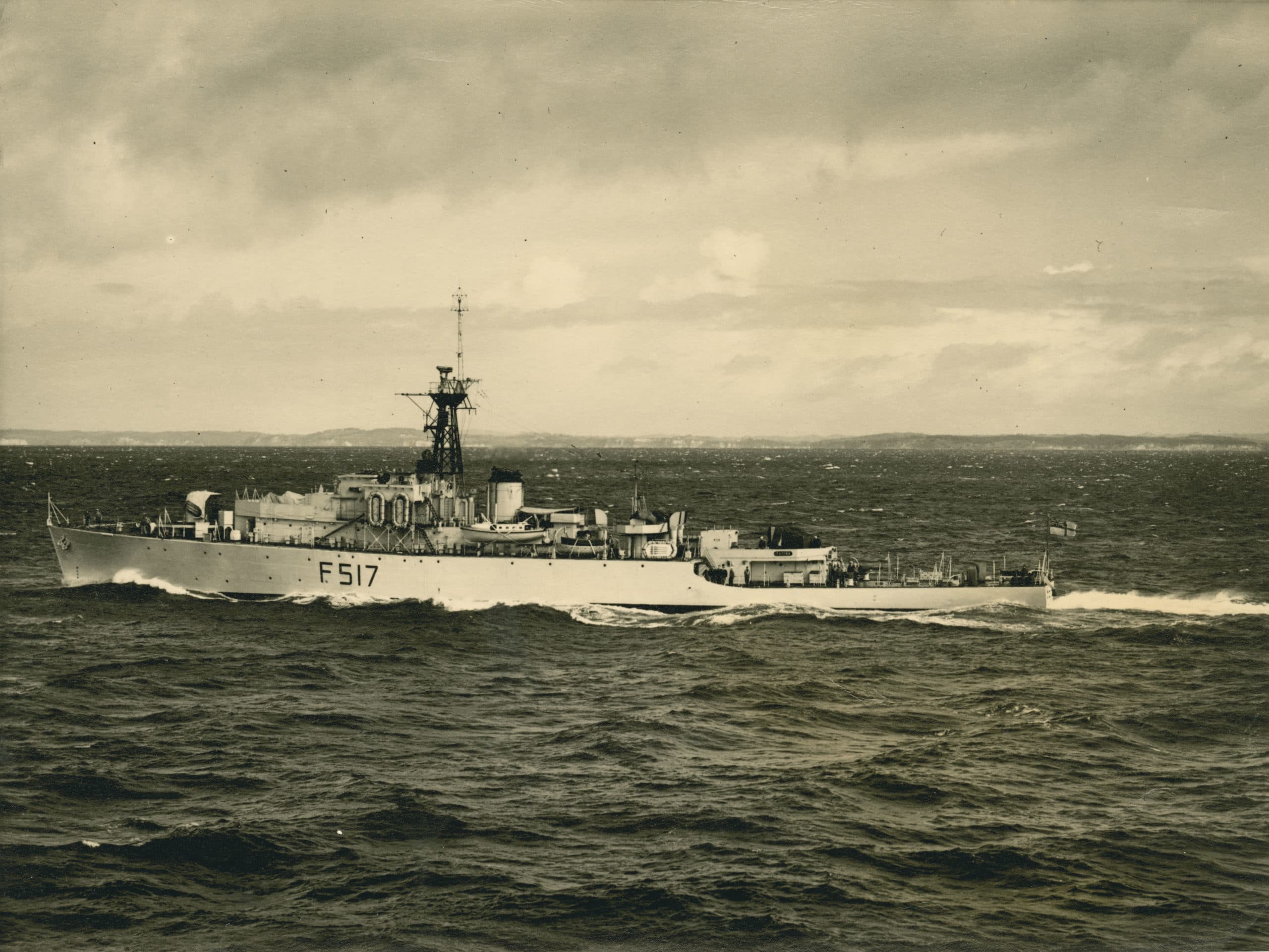 In 1948, six Loch-class frigates, including HMNZS Tutira, were bought from the Royal Navy for £1,500,000. These vessels were designed for anti-submarine, escort and convoy duties. They were cheap, simple, and rugged. Their service during the Second World War proved the reliability, its excellent cruising range, and good sea keeping qualities.

Developed from the slightly smaller River Class frigates and designed for mass production techniques. It was built by Swan, Hunter and Richardson, River Tyne and completed on 2 August 1944 and launched as HMS Loch Morlich.[1]

Rather than an aircraft carrier that had been proposed for the navy, Rear-Admiral G.W.G Simpson advocated a six-frigate concept to protect New Zealand from the potential submarine threat. In 1948, six Loch-class frigates were bought from the Royal Navy for £1,500,000. These vessels were designed for anti-submarine, escort and convoy duties. They were cheap, simple, and rugged. Their service during the Second World War proved the reliability, its excellent cruising range, and good sea keeping qualities.

In the immediate post-war period Loch Morlich was paid off into reserve. In 1948 after the purchase was approved in March 1948 the Loch Morlich was renamed HMNZS Tutira.[2] It was refitted and modernised in January 1949 at Sheerness and handed over and commissioned into the RNZN on 11 April 1949.[3] In June 1949, Tutira sailed from Portsmouth for New Zealand suffering a mishap at Malta in July 1949 when the vessel was grounded by the stern with some propeller damage.[4] It arrived in New Zealand on 25 August 1949 to serve in the New Zealand squadron with the HMNZS Bellona as flag ship. It undertook a cruise around all New Zealand ports and exercises with the RNZN and RAN in Australian waters as well as providing a training ship for CMT.[5]

The outbreak of the Korean War in 1950 put the RNZN onto a war footing. On 1 July 1950 the government decided to make a contribution to the naval force operating off the Korean Peninsula.[6] New Zealand’s answer was immediate.  On 29 June the Prime Minister, the Rt Hon S.G. Holland, told the House of Representatives that the Dominion would do whatever lay within its power to fulfil the obligations it had incurred under the United Nation s Charter.  “It is prepared”, he added, “to make available New Zealand Naval Units should they be required in the present Korean situation.” Tutira had returned from a Pacific cruise but was returned to sea to sail to Korea with her sister ship HMNZS Pukaki on 3 July 1950, reaching their Japanese base of operations on 3 August 1950. The commanding officer was Lieutenant Commander P.J.H. Hoare RN. It was a striking example of the flexibility of sea-power that it was possible to choose two ships, one in dock and the other not yet returned from an Islands Cruise, and expect them to leave for a war zone at less than four days’ notice.

During the weekend the two ships were made ready and fully manned.  Then, on a winter morning, they sailed for an area which few had heard of two weeks before.  “You are about to leave New Zealand in the United Nations first fifteen”, said a farewell signal from the New Zealand Naval Board.  “We know that you will do justice to this honour.  Good luck and good hunting.”

The two ships sailed north along a path that was to become familiar to the Navy  in the following years.  They sailed to Port Moresby for fuel, then east about New Guinea and the Philippines.  They arrived at Hong Kong on 19 July and began making good defects, embarking war stores and doing gunnery exercises.  On 27 July 1950 they sailed for Sasebo which had become the main base for the gathering United Nations Naval Forces. The New Zealand frigates found Sasebo expanding at a feverish pace.  Before the Second World War it had been under development as a Japanese Naval Base.  It had been heavily bombed and after the war the dockyard installations had been repaired to a limited extent.  The base was then placed under care and maintenance while the American occupation fleet used Yokosuka, near Tokyo, as its main base.

On their arrival HMNZ Ships Tutira and Pukaki were allocated to an escort element consisting of frigates and anti-submarine destroyers from the United Kingdom, Canada, Australia, France and the Netherlands.  Their function was to escort convoys from Sasebo and other Japanese ports to Pusan in South East Korea. The safe conduct of these convoys was essential.  The North Koreans were still sweeping down the Korean peninsula, compressing the defenders into the south east corner.  Troops and equipment were being rushed into this corner to hold the bridgehead and it was essential that the convoys should run without delay or harm.

The Tutira was tasked with escort, patrolling, shore bombardments, and blockade duties along the Korean island and shoal strewn western coast of Korea alongside Commonwealth, United States and South Korean ships. Convoy operations followed a familiar routine. They sailed from Sasebo in the early afternoon with a convoy, arrived at Pusan in the early hours of the following morning, patrolled off the harbour entrance until the convoy was safely inside and then returned to Japan at full speed.  They spent the night in harbour and sailed again the following day.  This meant days at sea with little rest.  In addition, during the few days spent in harbour as a break from this routine, the frigates remained at short notice for steam, ready to escort any shipping which might arrive.  It was a strenuous programme which was not made easier by the blistering heat of the Japanese summer or the restricted recreational amenities ashore.

As the United Nations Forces moved across the 38th Parallel a landing at Wonsan was planned.  Before this could be launched South Korean troops captured the port but it was decided to let the operation continue as the quickest method of reinforcing it and landing equipment. Tutira and Pukaki left Inchon on 16 October 1950 and raced after a convoy of more than 40 landing craft with the latest orders for the landing.  The convoy was reached at dawn on 18 October all that morning they transferred orders by heaving line to each ship in turn. The force reached Wonsan on 20 October 1950 but, because of extensive mining in and around the port, the landing was delayed for five days.  During this time the two ships steamed along a patrol line and about 100 miles south of the port.

After Wonsan, Tutira resumed her convoy escort and harbour control duties.  With Pukaki she controlled traffic entering the ports of Chinnampo and Inchon and escorted ships making the passage between them.  Periods at sea alternated with spells at Kure, Tokyo or Sasebo; the only drawback to this programme was the fact that the two frigates were working “opposite numbers” and it was months before they spent a day in port together. With the New Year the Korean situation changed again.  Overwhelming Chinese forces crossed the North Korean border and the United Nations troops were forced to withdraw.  Both Inchon and Chinnampo were evacuated, leaving the Naval Forces without a base in the forward area on the west coast of Korea.  In February the United Nations Armies advanced again and Inchon was re-occupied.  During the retreat the Tutira & Pukaki joined the patrols which largely prohibited the enemy from using coastal shipping; with the re-occupation of Inchon they resumed their harbour control duties.

March 1950 brought a welcome change of duty for Tutira.  Mines were known to be laid in areas to the north-west, north and south-east of Peng Yong Island and the New Zealand frigate was instructed to take charge of two South Korean mine-sweepers and clear them.  It took three weeks to complete a task made more than usually difficult by language problems and by conflicting and unpredictable currents.  Nevertheless, Tutira welcomed the job as the most interesting since her arrival on the station and as a fitting end to her tour of duty.  When it was completed she had a arrived at Kure on 26 April and underwent a short refit. She then departed for Auckland.  When she arrived home on 30 May she had steamed 35,400 miles and had been away from New Zealand a few days short of 11 months. She was replaced on station by HMNZS Hawea. [7]

In August 1953, Tutira was put into reserve.[8] It was refitted during 1953-1954 and had limited sea trials in late June 1954. Following these trials it was partially cocooned and not modernised as her sister vessels had been. Tutira went into extended reserve in September 1958 and was extensively cannibalised for parts for the vessels still on active service. In October 1961 what remained of the Tutira was sold to Hong Kong Foundries along with HMNZS Taupo and towed to Hong Kong on 18/10/1961, arriving mid December 1961.[9]

The badge’s simple design was suggested by the ship. It is a traditional craving of the head of a Māori warrior coloured red ochre, a colour traditionally used on many Māori carvings. The Department of Māori Affairs also provided input into the design which was approved in March 1951. Tutira is also a lake on the East Coast of the North Island.