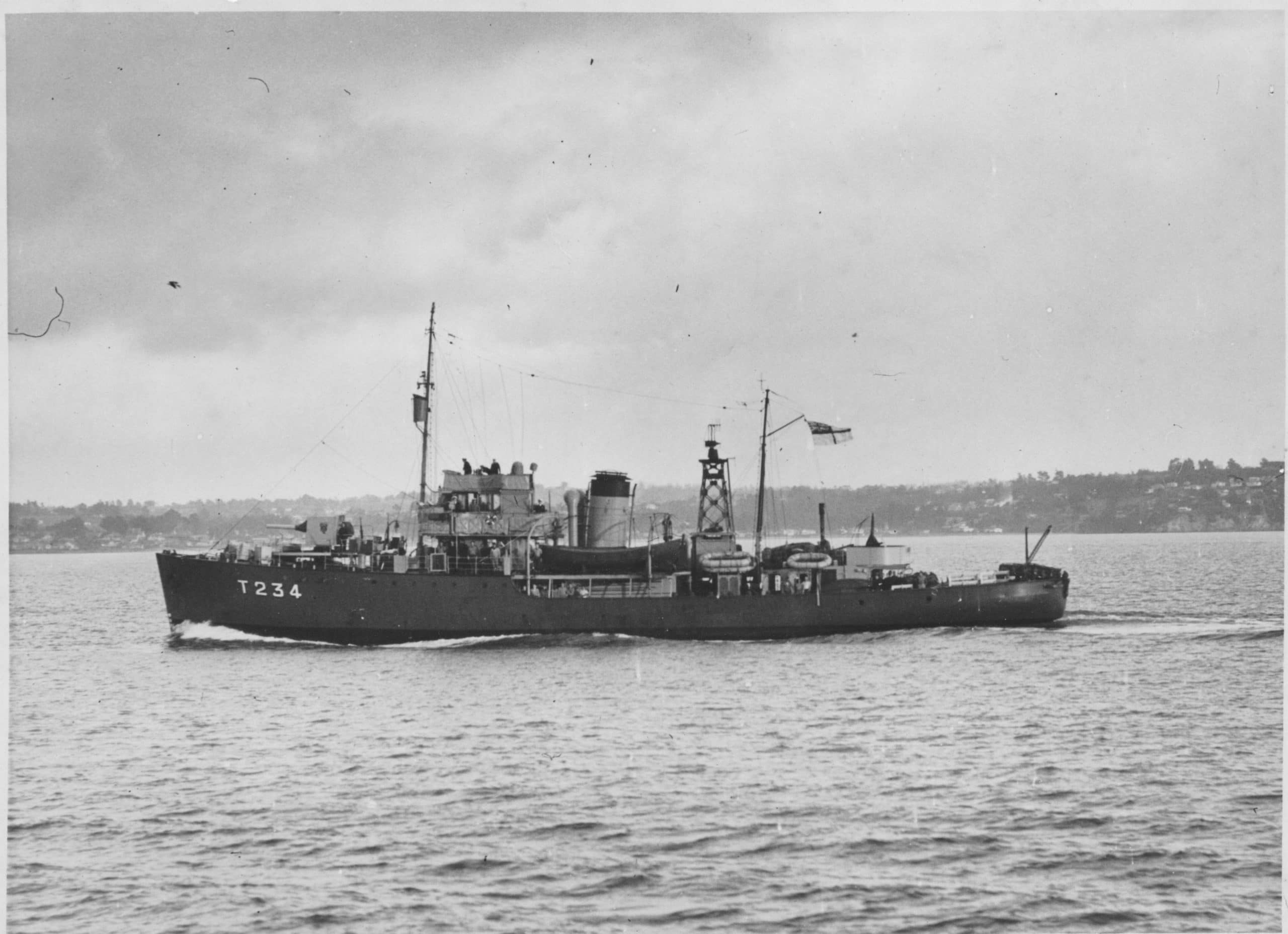 One of three small Bird class corvettes ordered by New Zealand, HMNZS Tui was built by Henry Robb Ltd. of Leith, Scotland and was completed by November 1941. These were the first new ships to enter service with the Royal New Zealand Navy and was designed for training in seamanship, gunnery, minesweeping, and torpedo.

The ship’s badge was first proposed by the Navy Office in 1941. However, a design was not created until 1952 and approved in February 1953. Initially the badge had kowhai leaves and flowers but this was altered in 1970 when a second ship to enter service as Tui was commissioned.

One of three small Bird class corvettes ordered by New Zealand, HMNZS Tui (call sign T234 and later P33) was built by Henry Robb Ltd. of Leith, Scotland at a cost of £80,000 and was completed by November 1941. This class was based on the design of an experimental Royal Navy minesweeping trawler HMS Basset and were the first new ships to enter service with the Royal New Zealand Navy and was designed for training in seamanship, gunnery, minesweeping, and torpedo. Tui had a mounting for a training torpedo tube but was never used during the war.  These were first ordered in 1939 but due to delays in construction the vessels did not enter service until late 1941. The RNZN would use these vessels in minesweeping and escort duties.  Lieutenant-Commander J.G. Hilliard DSC RNZNVR was the first commanding officer and commissioned Tui on 26 November 1941. Upon her completion and commissioning, Tui carried out workup exercises in Scottish waters. Tui departed Greenock, Scotland on 15 March 1942 to assist in escorting a convoy of four Isles-class minesweeping trawlers for the RNZN to St Johns, Newfoundland and then on Bermuda, Jamaica, Panama, and San Pedro. From San Pedro she arrived at Pearl Harbour on 22 June 1942.   She arrived in Auckland on 4 August 1942. In early September 1942 Tui was deployed to Suva replacing Matai. She remained there until December 1942 when she departed for Noumea.

At Noumea Tui joined her sister ships HMNZS Moa, Kiwi, and the support vessel HMNZS Matai at Noumea to constitute a New Zealand anti-submarine flotilla which was designated the 25th Minesweeping Flotilla which would serve under the command of a United States Navy officer who was the Commander, South Pacific Area (COMSOPAC).   For the rest of her wartime service Tui would remain in this flotilla until 1946. The Flotilla arrived off Lunga on Guadalcanal Island on 15 December and after fuelling and watering proceeded onto anti-submarine patrols. In January 1943 the three RNZN vessels were designated as the 30th Trawler Group. This group would operate in and around the Solomon Islands until 1945, only returning to New Zealand for refits.

Tui’s first action occurred on the morning of 31 January 1943 when in company with Moa four Japanese landing barges were encountered off Cape Esperance. As the vessels closed in, the Japanese opened fire. After a vigorous action, the leading barge was silenced and two others were sunk one of which Tui’s 4-inch gun sank after a direct hit. Three months later Tui was part of the task force sent to bombard Munda and Vila. As the task force left Tulagi Harbour, a formation of 67 Japanese bombers escorted by 110 Zeros were sighted. The task force was ordered to retire eastward to Indispensable Strait. Tui was ordered back to Tulagi but was not attacked. On this day Moa was lost to a Japanese bomber and was replaced by the minesweeper HMNZS Breeze. For the duration of 1943 Tui was deployed on anti-submarine patrols and escorting American supply ships in the Guadalcanal-Tulagi-Russell Islands area.   In July 1943 Tui escorted the RAN minelayer HMAS Bungaree from Auckland with 446 mines to be laid off Noumea at the request of COMSOPAC. This eliminated the stocks of mines held in New Zealand.

On 19 August 1943 Tui sailed from Noumea as antisubmarine escort to the US Navy supply ship USS Taganak and the liberty ship Wiley Post, bound for Espiritu Santo. Shortly after two o’clock in the afternoon the ASDIC operator, Able Seaman John Gallon RNVR, in Tui reported a ‘contact’ bearing east, at the long range of 3100 metres.  The convoy was ordered to make an emergency turn to starboard and commenced zigzagging at full speed. Gallon was insistent it was a submarine to the Anti-submarine control officer.  Tui carried out a run over the contact position but did not discharge any depth charges.

Twelve minutes later Tui carried out a second run over the position (see copy of Tui’s Track Chart below) launching two depth charges. Nine minutes later a third run was made and a further two depth charges discharged. At this time the contact was lost.  American seaplanes now arrived and assisted in the hunt. Tui then rejoined the convoy to resume the escort but was called away twice by the aircraft to search a likely location for the submarine. At 5.15 pm what looked like the conning tower of a submarine was sighted. It was well out of range and making away at speed under much brown, oily smoke. Tui opened fire at 7300 metres with her 4-inch (102mm) gun and scored two hits. She ceased fire after twenty rounds, and three American aircraft then attacked with depth-charges. Then the submarine was seen to up-end and sink vertically. Three minutes later two heavy underwater explosions were heard on the ASDIC phones and felt throughout the ship. Tui picked up six Japanese ratings, the only survivors of the submarine’s complement of more than ninety officers and ratings. She received orders to return to Noumea, where she arrived next morning. Interrogation or the prisoners disclosed that the submarine was the I-17, a sister ship to the I-1 that had been sunk by Kiwi and Moa. She had been deployed to make an aircraft reconnaissance of Espiritu Santo and to raid shipping. She was the seventeenth Japanese submarine destroyed in South Pacific since January 1942.

During the last quarter of 1943, Tui along with Matai and Kiwi gave anti-submarine escort to supply ships returning to New Georgia, Vella Lavella, and the Treasury Islands. On the night of 10 October 1943, while patrolling of Guadalcanal, Tui was narrowly missed by an air-dropped Japanese torpedo. From January 1944 onward the Flotilla saw similar service in the Bougainville area. On 12 February 1944 Tui took part in a fruitless search for a Japanese submarine reported west of Buka Island. In May 1944, according to the war diary for the 25th M/S Flotilla and the ship’s report indicated Tui was involved in an attack on a Japanese submarine on 5 May. However there is no evidence that she sunk a submarine as the closest two Japanese submarines to this date were lost on 30 April. Tui returned to New Zealand in mid 1944 for refitting. She returned to service in the Solomon Islands in October 1944 with Matai which was replaced by the corvette HMNZS Arabis. In March 1945 she went on escort duty to Hollandia on the north coast of Dutch New Guinea.

Tui in company with Arabis returned to Auckland in July 1945 escorting the two sections of Fairmiles. On arrival at Auckland she was placed in reserve. Of the 25th Minesweeping Flotilla at which Tui was a part, the US Commander South Pacific Area, Admiral Halsey, paid the tribute that the ‘alert and courageous actions of the crews of these gallant little ships merit the highest praise.’

In August 1945 Tui was deployed to help in the clearance of the Auckland minefields, going into reserve in June 1946. She recommissioned in February 1952, as a training ship, before paying off in May 1955 for conversion to a research ship. The conversion began at the dockyard in September 1955 and completed in March 1956. Her armament was removed and her superstructure was extended aft, to provide space for laboratories, offices and additional accommodation. Rated as a Royal New Zealand Fleet Auxiliary, she made many scientific voyages around New Zealand, the Southern Oceans, and the South pacific between March 1956 and December 1967, when she finally paid off. She had a major refit in 1961, twenty years after she had first been commissioned into the RNZN. She was paid off in December 1967. She remained alongside Devonport for two years and was used as the Harbourmasters Office. She was striped and sold for scrap to Pacific Scrap Ltd Auckland in 1969 and broken up at the Western Viaduct in 1970.

After passing an ASDIC Course I joined HMNZS Tui as ASPO, on her first spell in the Solomons.  The other ships were HMNZS Matai, Kiwi and Moa.  As is well recorded that Kiwi and Moa sunk a 2,000 ton Jap Sub off Guadalcanal.  Tui sank several large Jap landing barges and Moa was sunk by Jap planes in Tulagi later.  It was just the luck of the draw as Tui was waiting to fuel after Moa.

The CO’s of the three New Zealand ships were: Kiwi Lieutenant Commander Bridson, Moa Lieutenant Commander Phipps and Tui Lieutenant Commander Hilliard.  Tui was in Suva working up prior to going to the Solomons and our first experience of war was when an American shore battery tried to sink us on our approaching the eastern tip of Guadalcanal.  Fortunately they were not very good shots, and they were called off finally by the Command Base of the Canal.  We arrived just after the Coral Sea Battle and were employed day and night patrol (Asdic) around merchant ships unloading and the relief of the US Marines by the American Army on Guadalcanal.  The Americans only held the Henderson Airfield and areas around it, together with Tulagi which was a small harbour on another Island about 20 miles across from Guadalcanal.  We arrived at the Solomons December 15th 1941, the Marines had landed in August (17th I think).

We suffered constant day and night bombing by the Japanese and saw several US destroyers sunk, together with many Jap planes shot down.  The US dive bombers accounted for the sinking of many Jap ships. The American PT boats based in Tulagi did a lot of damage to the Japs, but lost many boats and crews.  The Japs were coming down at night with food and provisions for the Japs still left ashore, throwing over 45 gallon drums containing this and we would go out and sink them before they could be washed ashore. Things were torrid over this period, but we were young and did not worry about being killed ourselves, all we wanted was to get another Jap submarine.