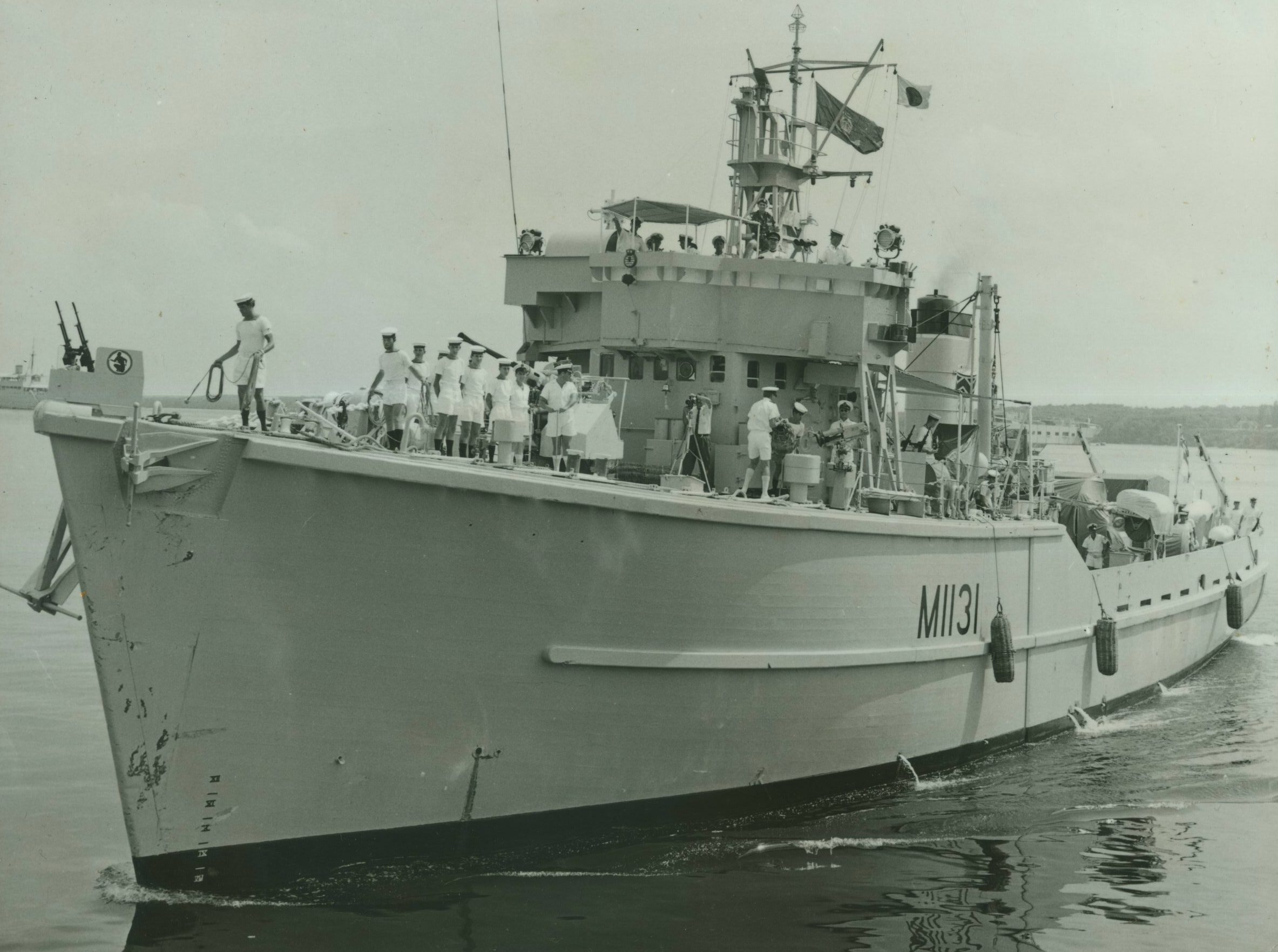 HMNZS Hickleton and Santon were coastal minesweepers – Ton Class. They saw active service in the Indonesian confrontation and are the only commissioned RNZN ships never to have visited New Zealand. 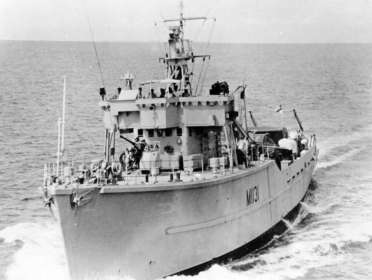 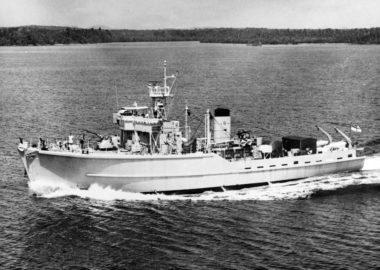 Ship’s badge: While in commission with the RNZN the ships were not issued with badges. They did not have a motto or battle honours.

This Admiralty-designed class of minesweepers were built 1951-1960 with 110 produced. They were constructed of composite wood hulls on aluminium frames, having a minimum of magnetic metal in the hull. This class was intended to be able to sweep conventional, magnetic, and other types of influence mines*. The ships in this class were named for British villages. Hickleton is a village in South Yorkshire, and Santon on the Isle of Man.

In early 1965, during the Indonesian Confrontation the government of New Zealand offered military assistance to the newly formed Federation of Malaysia. The offer took the form of the RNZN manning two Royal Navy Ton-class minesweepers Hickleton and Santon then held in reserve at Singapore. They would conduct anti-infiltration patrols to counter the increasingly aggressive Indonesian actions toward Malaysia. The Royal Navy would meet the running costs of the two ships while the RNZN paid the ship’s companies. There were three rotations of ship companies for each ship during their commission.

These two ships are unique in New Zealand naval history for a number of reasons:

The ship’s companies for both vessels were flown to Singapore in March 1965 to commission the minesweepers. Some RNZNVR officers were sent to serve alongside regular officers. Both ships were formally commissioned into the RNZN on 10 April 1965.  After working up they joined the Royal Navy’s 11th Minesweeping Squadron under the command of the Inshore Flotilla [Far East]. This squadron consisting of Royal Navy, Royal Australian Navy, and the two RNZN ships was tasked with anti-infiltration patrols in Malaysian waters around the Singapore-Malacca Straits and in the Sarawak-Sabah areas.  During their deployment Hickleton undertook 173 patrols and Santon 167. Twenty incidents involved intercepting small craft and taking Indonesian infiltrators as POWs. Minesweeping and visits to Hong Kong broke up the day-to-day routine. In February 1966, Hickleton and Santon took part in a minesweeping exercise and then in June Hickleton took part in Exercise LIONEX. In March 1966, Santon provided assistance in rescuing the crew of the wrecked freighter Carnia off eastern Sabah.

In August 1966, the Indonesian government ended its confrontation policy and the responsibility for patrols passed back to the Royal Malaysian Navy. The Royal Navy and Commonwealth navies withdrew from the anti-infiltration patrols. During the time of their deployment Hickleton had steamed 108,000km and Santon 100,000km. They had been on station for 490 days from 10 April 1965 to 12 August 1966. Under an agreement with the Royal Navy, the New Zealand crews would return the minesweepers back to Britain. Santon departed Singapore on 14 September 1966 and arrived at Portsmouth on 5 November. Hickleton departed in early October and arrived in early December. Upon arrival, both ships were paid off into reserve.  In 1967 both ships were sold to the Argentinian Navy and remained in service up to the end of the 1980s.

The Commander of the Far East Fleet wrote to the RNZN Chief of Naval Staff noting that the patrolling was tedious interspersed by ‘short sharp actions’. The men of both minesweepers had to maintain a degree of ‘restraint and patience unusual in times of hostilities’. He reported that the ‘conduct of these minesweepers has been truly magnificent, and I am indeed proud to have had them under my command during the confrontation war’.²

These minesweepers operated in two week cycles in three patrol areas. All vessels patrolled at night on set patterns. During the day one of the three vessels was on patrol duty. At night the ships were kept darkened. Hickleton had departed from the Sarawak patrol area the previous day bound for Singapore. During the passage the crew were employed preparing the ship for a planned visit by the Governor General of New Zealand, Brigadier Sir Bernard Fergusson. All portable weapons were unmounted and stowed away and the ammunition returned to the ship’s magazine. The weapons of the day were scrubbing and paint brushes as the crew spruced up the ship from masthead to waterline.

At about 0930 on 28 June 1966, while approaching the Singapore Straits in fine weather, a 6m kumpit, powered by a small outboard motor, was sighted about three miles north west of the Horsburgh lighthouse. The craft was about 180m off Hickleton’s starboard bow tracking south across the ship’s path. The Officer of the Watch, Gunnery Officer Sub-Lieutenant Wilson observed the craft was carrying three men in military uniform and a boatman. He promptly called the Commanding Officer Lieutenant-Commander Peter Wright, who in turn ordered ‘Approach Stations’ (stations for approaching a suspicious vessel). Buckets, scrubbers, paint pots and. rags were left where they were, as the crew scrambled to arm the ship  . As Hickleton passed astern of the kumpit and turned south paralleling its track, the crew brought up and mounted tile bridge and port quarter Bren guns, port side twin Vickers machine guns and the approach party’s Lanchester machine guns. Loaded magazines followed right behind. Meanwhile, Lieutenant-Commander Wright took control from the port bridge wing and Midshipman Churchill, manned the conning voice pipe. Sub-Lieutenant Wilson plotted the ship’s position every minute as the two vessels moved towards shallow reef water to the south.

The ship approached to within 18m of the craft and ordered it to stop. The ship’s interpreter had been left at Kuching so Sub-Lieutenant Wilson repeatedly called the Malay word Berhenti (Stop from his own knowledge of the local language gained from the local road traffic stop signs) through a powered megaphone. The repeated verbal and hand signal orders to stop were ignored. The kumpit could not out run the ship. However, its maneuverability enabled it to keep turning back on itself when Hickleton tried to get it alongside. After about ten minutes of maneuvering around each other, at less than 50m, Lieutenant-Commander Wright ordered the bridge Bren gun to fire single shots across the kumpit’s bow. These warning shots were also ignored. Further shots were then aimed at the craft’s outboard motor in an effort to immobilise it. One of the Indonesians then lifted a heavy machine from below the gunwale and fired at Hickleton from about 40m. Lieutenant-Commander Wright ordered ‘All guns open fire!’ and the kumpit was immediately immobilised with a burst of fire from Hickleton’s machine guns.⁴ The kumpit boatman at the same time dived or fell, overboard and was towed behind the crippled craft. Physical damage to Hickleton was limited to a small bullet hole in the bridge superstructure above the port Vickers’ mounting, and another in the signalman’s flag locker and funnel casing.

During the action, Sub-Lieutenant Wilson shouted down a voice pipe to the ship’s radio operator to send a Flash radio signal to the Fleet Commander. The signal stated, ‘Have engaged armed sampan vicinity Horsburgh Light; request medical assistance.’ Unfortunately, in the heat of the moment, the radio operator accidentally left out the word medical and Royal Navy ships exercising to the north, having intercepted the radio message, swung into action. The frigate, HMS Plymouth, raced south at high speed with her gun crews closed up while the aircraft carrier, HMS Eagle, launched supporting aircraft.

With the action over, Hickleton then investigated three other small craft nearby before returning to the scene of the incident. Of the four persons in the sampan, two had been killed and two were seriously wounded. As the ship came alongside the bullet-ridden craft, it rolled over and the dead and their weapons slipped below the surface. The wounded were ordered to remove their trousers before climbing on board Hickleton. This was to avoid hand grenades or other weapons being smuggled onto the ship. The prisoners were then restrained and moved aft to the sweep-deck. A few minutes later, the First Lieutenant, Lieutenant Jones, who was also the officer in charge of the Approach Party announced to the sweep-deck that he had found Indonesian Marine identity papers on the prisoners.

Hickleton’s crew then attempted to recover the bullet ridden kumpit and its contents; with the arms and expended cartridge cases as evidence of the action. The plan was to hoist the badly damaged craft aboard as it could not be towed. In addition to the many bullet holes its hull had been broken on the port side. Two slings were rigged and the waterlogged craft gently lifted from the water. At that moment the ship rolled heavily in the wash from the frigate HMS Plymouth which had arrived to provide support. As the ship rolled and the hulk hit the wash, it broke up, capsized, and sank. The only remaining evidence of the action was the bullet holes in the superstructure and funnel, and two seriously wounded Indonesians; the Indonesian weapons and expended cartridge cases were lost to the seabed.

As Hickleton had no medical staff on board, the Commanding Officer then put the ship alongside the frigate’s starboard side and the prisoners were transferred in stretchers for medical attention. It is understood that both wounded men died of their wounds the following day. Subsequently, the Governor General, Sir Bernard Fergusson, announced that the Queen had been pleased to approve the following awards in recognition of gallant and distinguished service in operations in Malaysia. Lieutenant Commander Wright was awarded the Distinguished Service Cross for his ‘able and courageous handling of a difficult situation’ on 28 June 1966 when his ship was returning to Singapore after an exercise in Borneo waters. Able Seaman Charles Taylor was awarded the Distinguished Service Medal for his courageous, cool and controlled action in the face of enemy fire.

* Influence Mine – Influence mines are those that are not detonated by a ship touching them or remotely. Rather, they are detonated by changes in the water pressure or the magnetic field of the warship.

4. The 40mm and 20mm guns were not fired in this engagement.