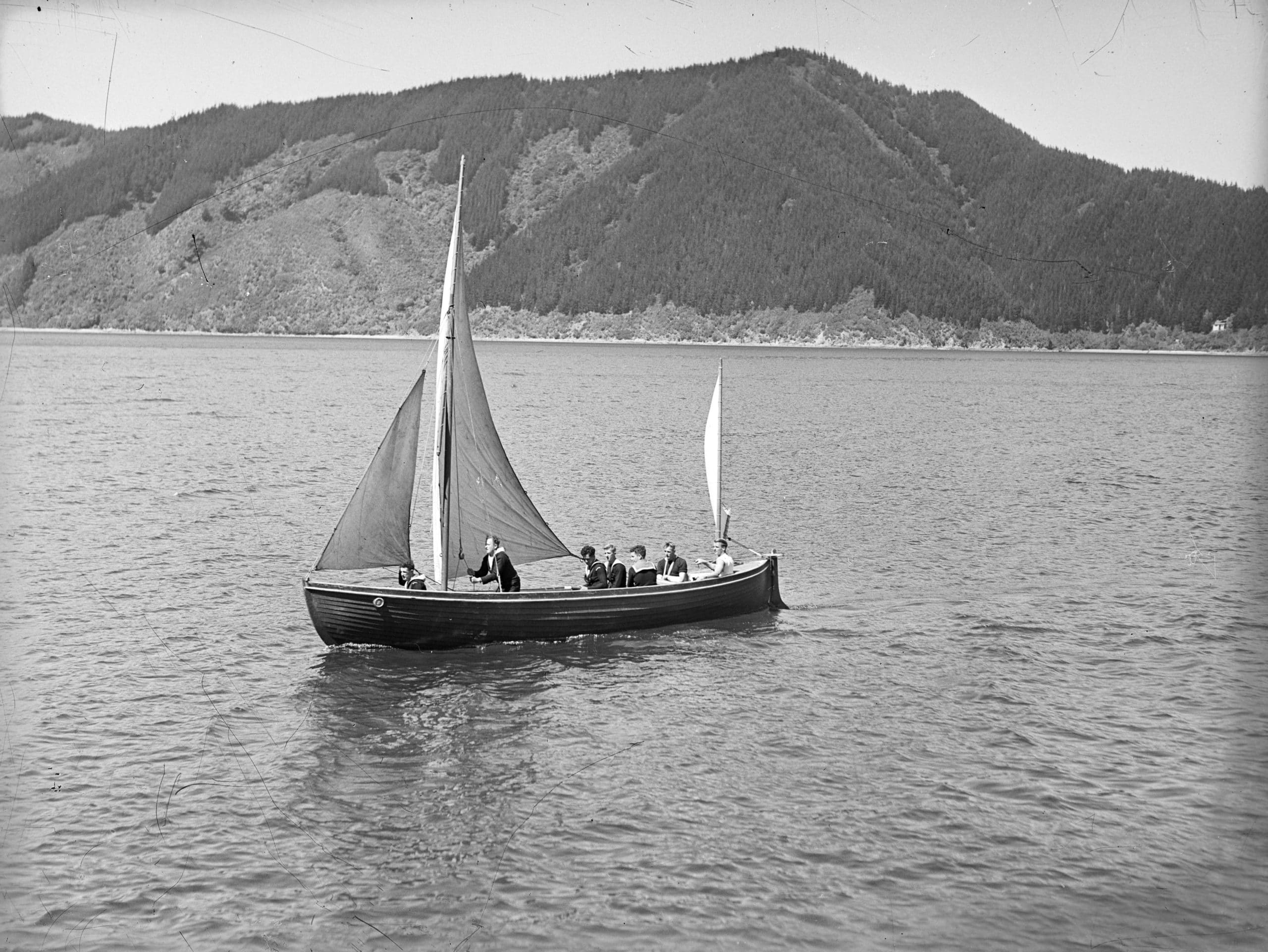 The earliest reference to ‘whaleboats’, as they were originally known, was in 1756 and when introduced into Royal Naval service around 1810, they were called ‘whale-gigs’.  Their use at this time was to take boarding parties to enemy ships and so it was highly desirable that they were unsinkable, thus they were fitted with buoyancy tanks, giving them a secondary role as lifeboats. 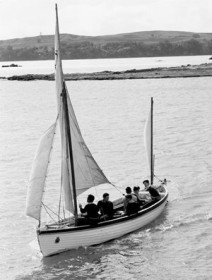 When the 27 foot clinker built Montagu whaler was phased out of service in the Royal New Zealand Navy in 1990, it marked the end of about 180 years service of that type of boat.  The double ended pulling boat was developed for ships engaged in whaling during the 18th century because they needed the manoeuvrability to reverse quickly away from whales which had been harpooned.  By the end of the Napoleonic wars this manoeuvrability was seen to be an advantage when boarding an enemy ship in battle.

The earliest reference to ‘whaleboats’, as they were originally known, was in 1756 and when introduced into Royal Naval service around 1810, they were called ‘whale-gigs’.  Their use at this time was to take boarding parties to enemy ships and so it was highly desirable that they were unsinkable, thus they were fitted with buoyancy tanks, giving them a secondary role as lifeboats.  During the mid 19th century the double ended boat was found to be useful in vessels suppressing the slave trade off Africa, where surf conditions were often encountered and by 1862 they were officially called ‘whalers’.[1]

Whalers are clinker built boats, which means that the planks run fore and aft, with the lower edge of one plank overlapping the upper edge of the next below.  The planks are fastened to each other by a copper nail, which passes through both planks and the end of which is bent over or clenched.  More recently the end of the nail is passed through a cone shaped washer called a rove.  Once all the planks are laid, using formers as a guide for shape, the internal timbers (ribs) are fitted to the interior of the planks to give added strength.[2]

British built whalers were made of elm, with some specialised components (such as the stem and knees) cut from oak that had grown to the required shape.  The New Zealand dockyard began constructing whalers after the Second World War, using kauri as the basic material, with pohutukawa for the grown parts.  From about 1960 the New Zealand whalers had laminated kauri stems and aprons, negating the need for the fore deadwood, as well as laminated breasthooks and knees.  Initially the laminate was glued with English Resorcinol Cascophen glue, but by about 1970 New Zealand Resorcinol was being used.  New Zealand boats were originally fitted with copper buoyancy tanks fore and aft, as were the British built boats, but during the 1960s the copper tanks were replaced with a foam block, contained within a fibreglass case.  The last whalers were built in 1981, but in the interests of apprentice training, several were extensively rebuilt, often retaining only a single component of the original, although the original numbers and other details were carved into the new parts.  One feature of the New Zealand built boats was an attempt to compensate for the hogging which is evident in the keel of boats which spent much of their life a the davits.  When the keel was laid and clamped into position, a wedge was inserted under each end, giving the keel a curved shape, which was locked-in with the fitting of the planks.  This curve gradually worked out with the boat kept at the davits, making the keel straight.[3]

Whalers were made in two sizes, 27 foot and 25 foot and were able to be both pulled and sailed.  When being pulled they were single banked, that is a single oar was used from each thwart, three on one side and two on the other.  The oars had a central shaft of Oregon pine, with laminated blades, four of them being 17 feet long and the bowman’s 16 feet in length.[4]  When under sail the boat has two masts and carries a ‘Montagu Rig K’.[5]

The original variety of designs of whalers had become standard by the 1870s, but in the early part of the 20th century a retired Admiral, The Honourable Victor Alexander Montagu CB, suggested a number of improvements to the design.  Once the improvements were incorporated, the designation, ‘Montagu Whaler’ was generally given to the new design to distinguish them from the earlier boats.  The principal differences were that the beam was increased and the after lines filled out, the sternpost was more curved and a drop keel introduced.   With an increased beam and a drop keel fitted, the arrangement of the masts was changed to a mainmast and a mizen, in lieu of the foremast and main mast of the older design, allowing more sail to be carried.[6]

Like all service boats, each whaler was specifically identified; their construction details were carved into both the sternpost and the lower end of the apron.  This included the size of the boat, its number, the dockyard designation and its year of manufacture, together with the Government ‘broad arrow’.

The New Zealand Navy’s association with whalers dates from the establishment of the New Zealand Naval Forces and the commissioning of the cruiser HMS Philomel in 1914.[7]  Included amongst the ships seven boats was a 27 foot whaler.  Besides being carried in ships, with the establishment of the Royal Naval Volunteer Reserve (NZ) in the late 1920s, whalers were issued to each division for seamanship instruction and sailing.  The last ship to carry a Montagu whaler was the minesweeper, HMNZS Inverell, which was decommissioned in 1976.[8]  The majority of New Zealand whalers were of the 27 foot variety, although there were two 25 footers, which were given to Sea Cadet units during the 1960s.  These two boats were quite different in their lines from those built in New Zealand and the gunwales were much thicker than was usual.[9]

For most of their time in service, the whaler was simply a small boat for specialised tasks.  Post the Second World War however, with the move towards smaller ships, such as frigates; the whaler was one of only two boats carried.  This meant that they had to be used as the ‘sea boat’, that is, the ready use boat and lifeboat.  As such they were fitted with special release gear and turned out, ready for use whenever the ship was at sea.  Also during this period there was a variant of the whaler developed, known as the ‘three-in-one whaler’, which had an engine, but could also be pulled or sailed.  This type of boat replaced the Montagu whaler in modern ships, remaining in service until the 1990s, in the New Zealand Navy.

Besides their official functions, whalers were used for recreation, both sailing and pulling.  Until the 1970s, fleet regattas were a regular feature of naval life, with keen competition between ships.  In 1950 two New Zealand ships, Hawea and Taupo went to the Mediterranean Fleet on exchange with two Royal Navy ships.  Both the New Zealand ships were very successful in the Mediterranean Fleet regatta at Marmarice in Turkey, between them winning virtually all the prizes for pulling and sailing and Taupo winning the overall regatta.  A few weeks later at Malta, Hawea won the Hamilton Cup, the first time that it had not been won by a crew from the shore establishment HMS St Angelo.  To commemorate this victory the Commanding Officer of Hawea, Lieutenant Commander T.W. Stocker RN, presented the Hawea Cup to the Royal New Zealand Navy for whaler pulling.  This was competed for annually until 1990 and on that occasion it was won by a team from the diving tender HMNZS Manawanui.

Some Parts of a Boat

Apron A piece of wood fitted on the inside of the stem, to which the end of the planks are screwed

Benches  The seats around the stern sheets

Bottom Boards Pieces of wood fastened together, laid on the bottom of the boat as flooring

Bow  foremost end of the boat

Garboard Stake The first plank laid on the bottom of the boat, next to the keel

Keel The backbone into which the boat is built

Hog A length of wood fitted to the upper part of the keel and extending the length of the keel to the deadwoods, to which the garboard strakes and timbers are secured

Thwarts  Seats placed across the boat

Yoke A crosshead of wood or metal fitted over the rudder head, to which lines are attached, leading to a tiller for sailing

[6] Admiralty Manual of Seamanship, London: Admiralty, 1915, pp. 201-202. Admiral Montagu’s full name is not given in the Manual, but The Hon VAT is the only Admiral Montagu listed in the Navy Lists of the period

[9] Gerrard.  He thinks that one of these went to the Sea Cadet unit at Otahuhu.