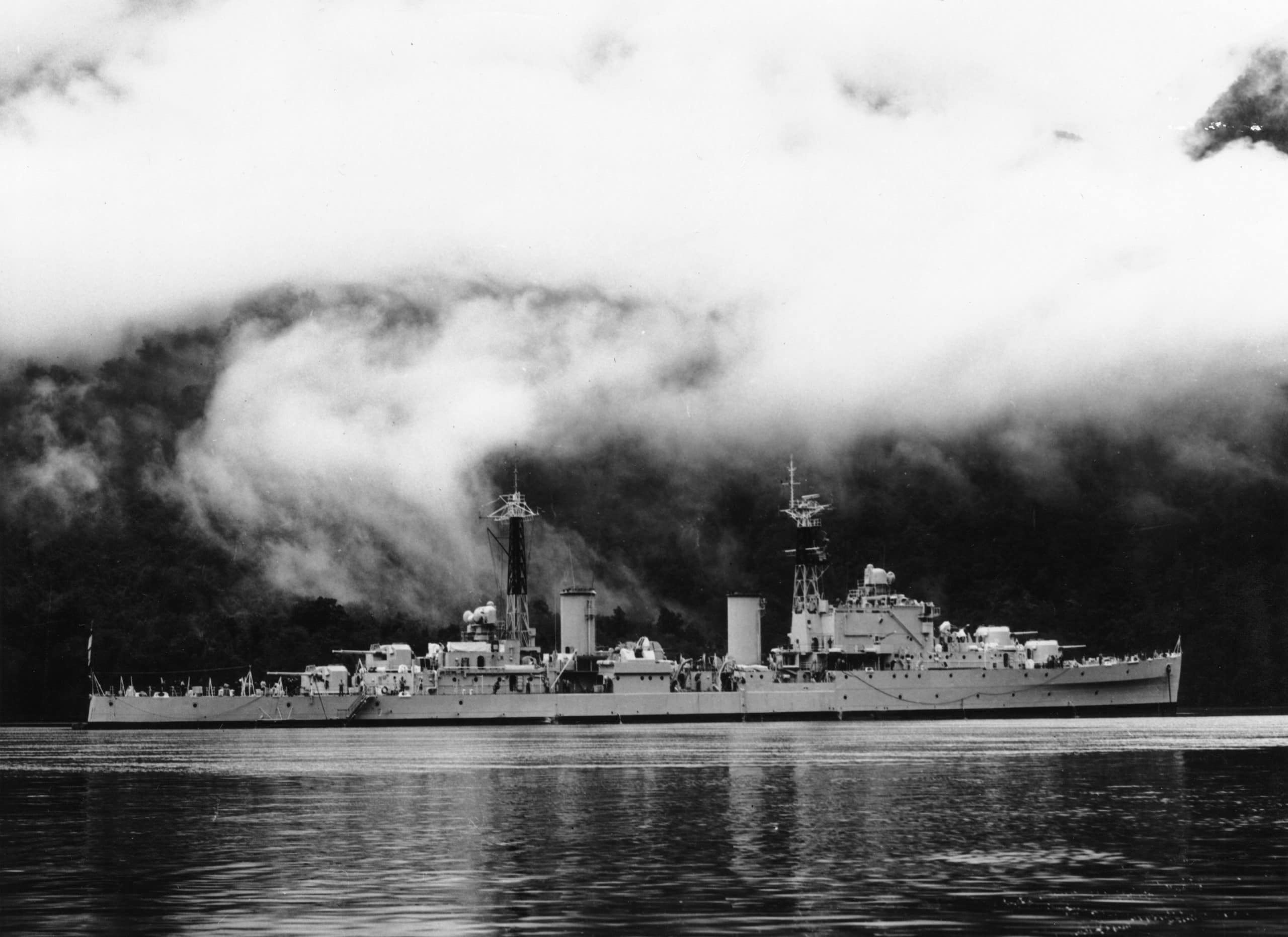 Royalist was laid down at Scotts’ Shipbuilding and Engineering at Greenock, Scotland, on 21 March 1940. There were three ships of this class: HMS Royalist, Black Prince and Bellona. All three would serve with the RNZN. Royalist’s initial service was to act as a flagship for escort carriers operating off Norway, attacking the battleship Tirpitz.

The pentagonal badge with the fleur-de-lis was in use prior to the First World War, although its origin is unknown. The first ship to bear the name Royalist entered service in 1796. The fleur-de-lis symbolises French Royalists who fled to England after the French Revolution of 1789. The Royal Navy formalised ship badges in 1919 and the original design was accepted in December of that year.

In the early 1950s, the design of RNZN ship badges was formalised with a round frame and crossed fern leaves. In November 1956, the Admiralty agreed that Royalist’s badge could also be changed to incorporate the new elements [5].

The Dido-class light cruisers were ordered in 1937. They were to be fitted with five twin turrets with the new dual-purpose (surface- and anti-aircraft) 5.25-inch (133-mm) guns. In 1939, five ships of the improved Dido-class cruisers were ordered. However, work was suspended between 1940 and 1941 due to shortages of turrets and turbines. The improved design eliminated one of the turrets and added greater AA armament.

Royalist was laid down at Scotts’ Shipbuilding and Engineering at Greenock, Scotland, on 21 March 1940. She was launched in May 1942 and completed in September 1943. HMS Royalist was commissioned into service with the Royal Navy on 25 August 1943. There were three ships of this class: HMS Royalist, Black Prince and Bellona. All three would serve with the Royal New Zealand Navy.

Royalist’s initial service was to act as a flagship for escort carriers operating off Norway, attacking the battleship Tirpitz. The improved Dido-class cruisers were designed as anti-aircraft cruisers, intended to operate as escorts to carriers. Royalist was fitted out as a flagship for this purpose during building. In July 1944, she was sent to the Mediterranean Fleet to serve during Operation Dragoon, the Allied landings in southern France. She also provided support for the Aegean operations against the German forces still in occupation. In early 1945, Royalist was transferred to the British Pacific Fleet. Again, she was escorting carriers, this time as they attacked targets in Sumatra and Malaya. In September 1945, Royalist was present at Singapore to take the Japanese surrender. She then returned to Britain and went into reserve as Portsmouth in January 1946.[3]

The Purchase of Royalist

In the 1950s, the RNZN began to test its independence from the RN. In 1955, the Naval Board reviewed the composition of the fleet and wanted to replace some of its ageing ships by purchasing two modern frigates. New Zealand Prime Minister Sidney Holland visited London that year.He was told that Commonwealth interests would be better served purchasing the cruiser Royalist as support for the carrier HMAS Sydney. The Prime Minister was further assured that it was intended to upgrade other cruisers, so that Royalist would not be an orphan. The government’s decision to acquire the cruiser was supported by the Naval Board and New Zealand paid the cost of the upgrade. However, the government was not aware that Chief of the New Zealand Naval Staff Commodore Madden had been briefed before he left London that one of his primary goals was to convince the New Zealand Government to buy Royalist.

Captain Peter Phipps, a Royal New Zealand Navy officer serving in London, believed that the purchase of the cruiser was an unmitigated disaster. He thought it would affect New Zealand for the next 10 to 15 years. With supreme irony, Captain Phipps was then appointed to commission Royalist. Regardless of plans and deadlines, Phipps was adamant that he would not accept the ship until it was fully ready. This included accommodation spaces for the ship’s company. The postponing of commissioning caused some embarrassment to the New Zealand Naval Board. Similarly, Captain Phipps was determined that he would not sign off the modernisation of the ship until all work had been completed to his satisfaction. In July 1956, the admiral superintendent of the dockyard inspected Royalist. After the inspection, a meeting was held in the wardroom. Facing a roomful of Royal Navy officers, Phipps was expected to sign the modernisation refit completion form. Again, he declined until he was satisfied with the work. Then he and Royalist went to the Mediterranean Fleet for working up.

Also in 1955, it was presumed that if Prime Minister Sidney Holland could be convinced to purchase a cruiser, he would give access to the uninhabited Kermadec Islands for Britain’s thermonuclear testing programme. He politely but firmly refused despite the British Prime Minister’s attempt to play upon the shared history of Britain and New Zealand, given his shock at New Zealand’s refusal. While New Zealand was not willing to provide a testing site, it did supply two frigates to the fleet supporting the 1957–58 testing programme conducted at Christmas and Malden Islands in the Pacific. The testing programme was known as Operation Grapple.

Royalist would also feature in another step to independence. In October 1956, Royalist was operating with the Mediterranean Fleet. As the most modern anti-aircraft cruiser in the fleet, Royalist was an important ship, particularly as she was fully worked up with the ships that would be at the forefront of any operations. Appreciation of the Suez situation in New Zealand was divided and in the absence of any other advice, Royalist continued with the Fleet. On 30 October, the Fleet was at sea on exercises when a signal was received to open sealed orders. Royalist was brought to full preparedness for war. As the operation began, Royalist was ordered to detach and withdraw as the New Zealand Government had refused to let the cruiser participate in the action, somewhat to the frustration of the ship’s company.

In 1946, the RNZN planned to replace the cruisers HMNZS Achilles and Gambia with new cruisers. Initially, Royalist’s two sister ships HMS Black Prince and Bellona were commissioned into RNZN service in May and October 1946. In 1953, Royalist was planned to be the first of a modified Dido class of cruisers, which would be the two vessels in RNZN service and four from the RN. However, the modernisation scheme was cancelled after work had started on Royalist in March 1953. The modernisation was ordered to be continued for her, and upon completion the ship would be returned to reserve. The project had replaced and added gunnery systems to the main armament and AA weapons. The bridge was rebuilt and new lattice masts added. This work was finished by mid-1956.

At this time, both Black Prince and Bellona were in need of major refits so it was agreed that Royalist would be loaned indefinitely to the RNZN in place of Bellona. Modernisation costs and stores would be paid for by the New Zealand Government. Royalist was formally handed over to the RNZN on 9 July 1956. Royalist joined the Mediterranean Fleet for exercises off Malta after departing for New Zealand from Plymouth on 16 July 1956. The Suez Crisis had closed the canal so Royalist had to voyage via South Africa after departing Malta on 10 November 1956. She arrived in Devonport on 20 December 1956.

For the next decade, Royalist participated in exercises with vessels from the RNZN as well as other navies in New Zealand waters, Australian waters, the Indian Ocean, the Pacific North West and off the west coast of the United States. Other duties included vice-regal tours and visits to the Pacific Islands. Royalist did six tours of duty in the Far East as part of New Zealand’s commitment to forces in the region. In May 1957, she undertook a 14-month deployment to the Far East as part of the New Zealand contribution to the Commonwealth Strategic Reserve. During this time, Royalist undertook some operations in the campaign against Malayan terrorists, including bombardments. She also exercised with other Commonwealth ships and made visits to ports in several countries, including Japan, Vietnam and the Philippines. She returned to New Zealand in July 1958. A major refit was undertaken at Devonport from May to September 1960. 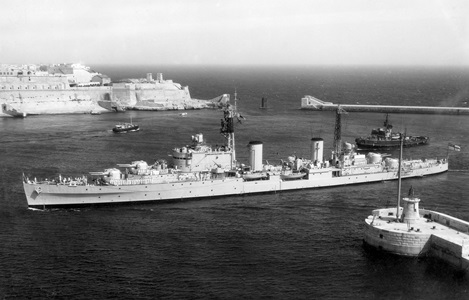 On 1 November 1965, HMNZS Royalist suffered a total engine failure on passage from Manus Island to Suva. She was returning from the Far East Station deployment with the Commonwealth Strategic Reserve. The breakdown occurred in the Coral Sea, 80 miles (129 km) south of Guadalcanal and 15 miles (24 km) north of Rennel Island. The engineers were forced to stop engines after it was discovered that there was serious salt-water contamination of her condenser feed-water, and badly damaged aft boilers and evaporators. This was commonly known as ‘condenseritis’. The commanding officer sent out a signal to Wellington for recovery and the RN survey vessel HMS Dampier was dispatched to undertake a rescue. After drifting overnight, Dampier reached Royalist and she was towed 110 miles (177 km) into open water. A RNZAF Sunderland flying boat from Lauthala Bay arrived to drop much needed mail and returned the following day, taking images of the distressed ship. Royalist drifted again for several days until the Brisbane tug Carlock took her in tow on 7 November. The survey ship HMNZS Lachlan arrived from Auckland on 9 November with fuel, parts and stores (but no beer) to rendezvous with Carlock. Upon arrival, Lachlan had a sign on display that read ‘Steptoe and Son’.

Lachlan then escorted Royalist back to Auckland. On the morning of 11 November, the forward engines were brought into use and Carlock was able to drop the tow next morning. Royalist arrived at Auckland under her own power for the last time on 17 November. As a result of the breakdown, her engineering officer, Commander Simmonds, was sent before a court martial on 1 February 1966. After nine days of evidence, he was acquitted.

After arrival at Devonport, work was undertaken to begin the paying-off process. From November 1965 until June 1966, Royalist operated as an alongside training ship. At a sunset ceremony on Monday 4 July 1966, HMNZS Royalist was formally decommissioned. After decommissioning, valuable fittings and equipment were removed. Her guns were removed and taken to a scrapyard in Otahuhu, Auckland, where the barrels were cut into 30-inch (76-cm) lengths to be melted down and made into reinforcing bars.[4] On 21 December 1967, the hulk was towed from Auckland and arrived in Japan for scrapping in January 1968.