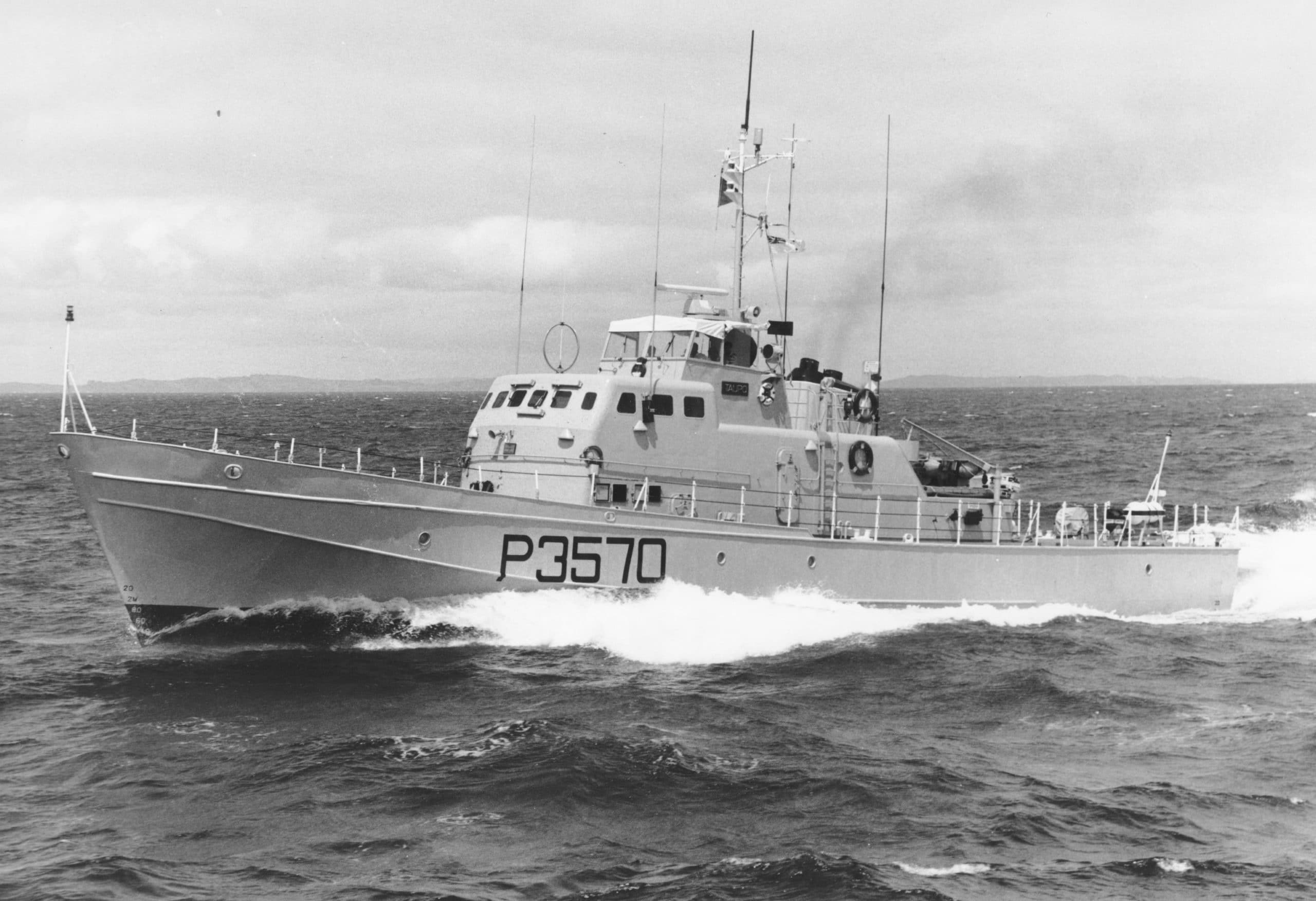 The RNZN in the early 1970s sought a replacement patrol craft for the slow and inadequate SDMLs which were of the Second World War era. These craft would be used for fisheries patrols and surveillance of territorial waters which in 1975 was a 12-mile [19km] zone. Taupo was laid down on 25 July 1974. She was then sent to New Zealand and arrived in Auckland on 9 June 1975 with her sister ship Hawea.

The RNZN in the early 1970s sought a replacement patrol craft for the slow and inadequate SDMLs which were of the Second World War era. These craft would be used for fisheries patrols and surveillance of territorial waters which in 1975 was a 12-mile [19km] zone. They were not designed for patrolling the 200 mile [322km] EEZ that was declared from 1 October 1977. This was left to the RNZAF Orion and RNZN frigates. It was originally intended to order six vessels from Brooke Marine at Lowestoft in Britain but the order was reduced to four. Names were transferred over from four of the Loch-class frigates which had served with the RNZN in the 1950s & 1960s. The names chosen were Hawea, Pukaki, Rotoiti and Taupo.[4]

Taupo was laid down on 25 July 1974 and completed by November 1974. She was then sent to New Zealand on a heavy lift ship Starman and arrived in Auckland on 9 June 1975 with her sister ship Hawea. After unloading they were towed to HMNZS Philomel to complete fitting out. Taupo was formally named and commissioned into the RNZN on 29 July 1975. She began her shakedown cruise on 5 August 1975. She then took up fisheries patrol work by mid August 1975. This task would take up most of the deployment time but the patrol craft from 1975 to 1990 but they would also take part in RNZN fleet exercises with both RNZN and overseas vessels. The patrol craft were also used for RNZNVR exercises. During their initial service the vessel were beset with vibration problems. This class of patrol craft had a reputation for being hard on their crews when underway in heave seas and there were some sailors injured during the first deployments. One sailor who served on these vessels described them as capable of “rolling on wet grass”.

During the service of Taupo she would be in refit regularly while her sister ships were on deployment. In addition the patrol craft were subject to fuel economy measures which meant for periods one of the patrol craft would be laid up at Philomel. All four craft were given extensive refits at Devonport from 1983 to 1985. To support the patrol craft a synchrolift docking facility was built on the South Yard of Philomel in 1973-1974. A 500 ton 40m concrete pontoon was fitted out as a base with stores and workshop facilities to service the patrol craft at the dockyard.

Taupo served with the RNZN until 1990 when she and her sister ships were decommissioned and sold off. Her most significant event was the participation in the rescue of passengers and crew from the Soviet liner Mikhail Lermontov in Port Gore in the outer Marlborough Sounds on the night of 16 February 1986.

This was badge was approved in February 1951. The canoe is intended to represent Te Arawa. The red back ground represents the region of Taupo as one of New Zealand’s volcanic zones