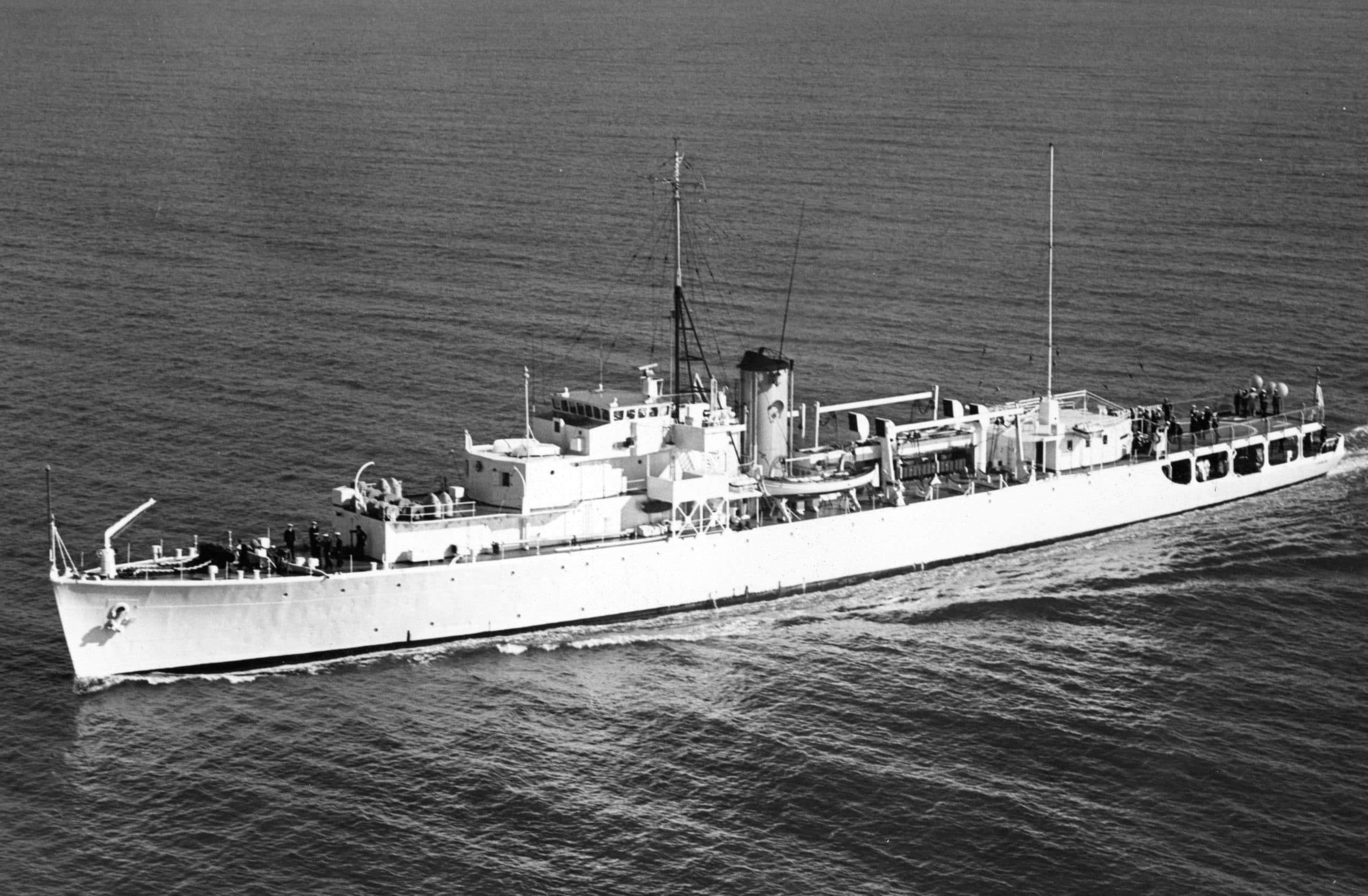 In 1948, the New Zealand Government sought a survey ship on loan. Lachlan was offered after negotiations on the term of the loan, which was initially to be three years. During the Waterfront Strike of 1951, Lachlan was deployed to Dunedin where her ship’s company worked the wharves. Detachments from there were sent to Westport to work in the coal mines and operate the wharf.

Armament: All armament removed in 1949 for RNZN survey duties

Name: A river that flows through south-central New South Wales

The River-class frigates were designed to meet a need during the Second World War. An anti-submarine escort ship better suited to conditions in the Atlantic than the smaller single-screw Flower- and Castle-class corvettes was required. This type of frigate was built in Britain, Canada and Australia. Lachlan was one of 12 River-class frigates built in Australia for the Royal Australian Navy. Lachlan was laid down at Mort’s Dock and Engineering Co. in Balmain, Sydney, on 22 March 1943. She was launched on 25 March 1944 and completed by 14 February 1945.

Lachlan was commissioned into service with the Royal Australian Navy on 14 February 1945. She was to serve as a survey vessel. She was deployed overseas to survey landing zones at Tarakan in Borneo before and after the Allied landings there on 1 May 1945. In June 1945 she surveyed Brunei Bay after the landings were carried out. During her survey work she was occasionally fired upon. As a result, she suffered a damaged ship’s boat and some casualties on one occasion.

With the Japanese surrender in August 1945, Lachlan was sent to the Moluccas in September 1945. She took Australian army investigators to look for and arrest war criminals. She remained as part of the RAN’s Hydrographic Unit until 1948 when she was put into reserve at Fremantle and paid off.

In 1948, the New Zealand Government sought a survey ship on loan while a new survey vessel was to be built in Britain. Lachlan was offered after negotiations on the term of the loan, which was initially to be three years. Therefore, on 5 October 1949, HMAS Lachlan was paid off from service with the RAN and formally commissioned into RNZN service as HMNZS Lachlan on the same day. A crew of RNZN personnel brought the ship out of reserve and prepared for passage to Auckland.

HMNZS Lachlan arrived in Auckland in November 1949. At the dockyard at HMNZS Philomel, the ship was fully disarmed and the chartroom enlarged for surveying. Such was the rush to get Lachlan into service as a survey vessel that new chartroom fittings were made at sea. Part of the ship’s company included hydrographic experts from the RAN and Royal Navy (RN). They were on loan to help establish the hydrographic service.

The first survey undertaken began on 18 November 1949, which consisted of surveying the Wellington Harbour entrance to Cook Strait. Work was done in three weeks with the assistance of the survey motor boat brought from Australia. In January 1950, Lachlan undertook a survey of Foveaux Strait and the harbour of Bluff. Both locations were a high priority for the new RNZN hydrographic service. Over the next 24 years, Lachlan surveyed more than 50 percent of New Zealand’s coastline. Surveys were also carried out in Australia and other places in the Pacific. Lachlan also assisted in clearing mines from the Second World War that were laid around the Gilbert and Ellice Islands.

In October 1954, Lachlan’s bow was badly damaged in a collision with the wharf at Napier. In June 1956 she rescued 18 men whose small motor vessel went down in the northern Tongan islands. In October 1963, Lachlan was sent to assist the RN survey ship HMS Cook that had struck coral in Fiji. In November 1965, she went to the aid of the cruiser HMNZS Royalist, which had been struck with boiler problems south of the Solomon Islands.

In 1962, after what was supposed to be a three-year ‘loan’, the New Zealand Government purchased the vessel for £16,000. By 1970, Lachlan was due to be decommissioned and disposed of but in May 1970 the government ordered the RNZN to extend her service for a further five years.

During the Waterfront Strike of 1951, Lachlan was deployed to Dunedin where her ship’s company worked the wharves. Detachments from there were sent to Westport to work in the coal mines and operate the wharf. As with other vessels in the RNZN, Lachlan served as the guard ship at Waitangi for the Treaty celebrations as well as participating in the 1953 Royal Tour. Non-military surveys were completed for the development of the Marsden Point Wharf in Northland and the iron sand ports of Waipipi and Taiaroa. Survey boats were often deployed to the many lakes around New Zealand to carry out necessary work.

In 1956, the RNZN was requested by the RN to survey Christmas and Malden Islands in the Pacific. These islands would be used for Operation Grapple, the series of atmospheric nuclear tests carried out by Britain in 1957 and 1958.

In June 1973, before the frigates HMNZS Otago and Canterbury were deployed to Mururoa Atoll to protest French nuclear testing, Lachlan was sent on a special mission. While the ship’s company was convinced that Mururoa Atoll was her destination, it was not the case. There was no intent to dispatch her to the atoll to observe the atmospheric tests. This was partly due to the fact that Lachlan was not armed. The programme was changed so that the vessel could conduct signal intelligence gathering. She spent the period from 21 June to 1 July 1973 steaming off Rarotonga, tracking and eavesdropping on French radio communications under the direction of Lieutenant Commander Milton. He had embarked aboard especially for this purpose. He had been involved in communication intercepts since 1944.

The commanding officer, Commander Monro, also calculated the bearing from Waiouru to Mururoa Atoll for HMNZS Irirangi so that the directional aerials could be directed to listen in to the French communications. At the same time Lachlan undertook surveying of Avatiu Harbour, Rarotonga, and from Friday 23 June until Wednesday 28 June she remained at sea to gale-force winds.

At 0000 hrs on 2 July 1973, HMNZS Lachlan received orders from Wellington to return to New Zealand, and arrived in Devonport on Saturday 7 July. A course was set to avoid HMNZS Otago. This was to keep Lachlan’s part in obtaining signal intelligence from the media contingent aboard Otago.

Following the 1949 refit, there were further modifications undertaken during service with the RNZN:

Lachlan’s final survey session overseas occurred in July 1973. A final New Zealand survey was completed in the northern waters. Lachlan arrived in Devonport on 28 May 1974. In September 1974, she deployed army personnel on exercises at Great Barrier Island. In November 1974, the ship departed on a farewell tour of New Zealand. The tour was cut short after damage sustained at sea between Gisborne and Napier. Lachlan returned to Auckland by the end of November and was paid off on 13 December 1974. In her service with the RNZN Lachlan covered over 499, 582 miles (804,000 km) at an average of 19,884 miles (32,000 km) per year. Her service to New Zealand marine cartography cannot be underestimated.

In 1975, Lachlan was painted grey and berthed at HMNZS Philomel as accommodation for ships’ companies whose frigates were undergoing refit. The engines were removed in September 1975 and sold. In 1993, the hulk of HMNZS Lachlan was sold to a Philippines company. In September she was towed along with the decommissioned patrol craft Pukaki and Rotoiti by the Northland tug Herekino.