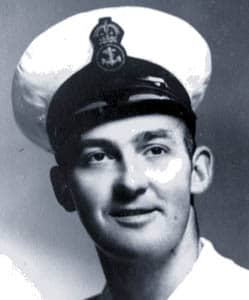 After an early career as a baker and a policeman Leading Cook Thomas  Abbott joined the Royal New Zealand Navy in 1951.  After a brief period of training at HMNZS TAMAKI he was sent to HMNZS PHILOMEL at Devonport to train in the galley there under Pincher Martin and Joe Dobbin.  He became an Officers’ cook and first served in the frigate HMNZS HAWEA whilst deployed to the Korean War.  In addition to being a cook, he was an ammunition handler and describes several of the actions that occurred on the Korean coast.

Upon his return to New Zealand, Abbott was posted to the Naval W/T Station, HMNZS IRIRANGI based at Waiouru.  He was with the first naval group on the scene of the Tangiwai train disaster in the central North Island of New Zealand, Christmas Day 1953 where 140 lives were lost when a railway bridge was washed out by a lahar.  Due to his police experience he assisted with the process of body identification and describes in some detail the various activities that occurred.

In early 1954, soon after the Tangiwai disaster, Thomas Abbott retired from the RNZN.