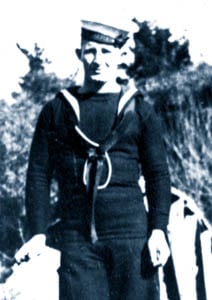 Petty Officer William McKenzie joined the New Zealand Division of the Royal Navy in 1933 as a Seaman Boy.  After a year’s basic training at HMS PHILOMEL he was posted to the cruiser HMS DIOMEDE for sea training, where he saw rather a lot of the world including Abyssinia, the Mediterranean and eventually Britain.  HMS DIOMEDE paid off on the 31st March 1936, with the cruiser HMS ACHILLES commissioned the same day.  McKenzie served in HMS ACHILLES for some five years during which time he was sent to the Royal Australian Naval Station HMAS FLINDERS for gunnery training.  He was onboard HMS ACHILLES during both a small scale mutiny over pay rates, and during the Battle of the River Plate.  As the trainer in A turret he describes his role in that legendary action with the German battleship ADMIRAL GRAF SPEE.

In 1941 McKenzie left for Britain onboard the New Zealand Shipping Company vessel RIMUTAKA and narrowly missed being onboard the ill-fated cruiser HMS NEPTUNE for the return journey to New Zealand; he joined the Bird class trawler HMS MOA briefly instead.  At this point the New Zealand Division was declared a Navy in its own right.  McKenzie was then posted to the escort destroyer HMS BEAUFORT which was based in the Mediterranean.  He stayed for several years mainly on convoy duty between Alexandria and Malta and also in Tobruk.  In 1944 he left HMS BEAUFORT in Alexandria, travelling back to the United Kingdom in the vessel STIRLING CASTLE, before boarding the London class cruiser HMS DEVONSHIRE in 1945 for the trip back to New Zealand.  Once back in New Zealand McKenzie spent a year at the training establishment HMNZS TAMAKI on Motuihe Island as an instructor, returning to HMNZS PHILOMEL for the remaining months of his service.

William McKenzie retired from the Royal New Zealand Navy in early 1947 having attained the rank of Petty Officer.