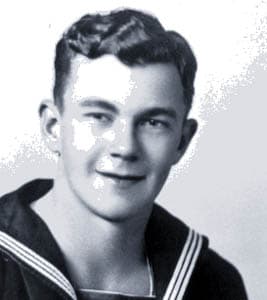 Able Seaman Stanley Coveney joined the Royal New Zealand Navy from the Royal Navy Volunteer Reserve, which he entered in mid-1938.  He was posted to HMS PHILOMEL in May 1940 before joining the newly refurbished, armed merchant cruiser HMS MONOWAI.  HMS MONOWAI’s work was mainly escorting freighters, tankers and liners in near-New Zealand waters, bound from or to Panama, Australia or North America, while the threat existed of German raiders such as ORION and KOMET.

Coveney was then posted to the Royal Navy base HMS SULTAN in Singapore and shortly after he arrived, the Japanese took that city which lead to him being involved in the subsequent evacuation onboard the patrol vessel PING-WO.  The ship was then put to work towing the Australian destroyer HMAS VENDETTA from Batavia (Jakarta) to Fremantle.

While in Australia, Coveney quite by chance managed to “hitch” a ride back to New Zealand onboard his old ship, HMNZS MONOWAI.  After completing various asdic courses ashore Coveney joined the converted merchant ship HMNZS BREEZE, a minesweeper in the 25th Minesweeping Flotilla which at that time was serving in the Pacific Islands.

The remainder of the war was seen out onboard the trawler HMNZS SCARBA, a minesweeper based in New Zealand waters.  Coveney was discharged as an able seaman in October 1945.