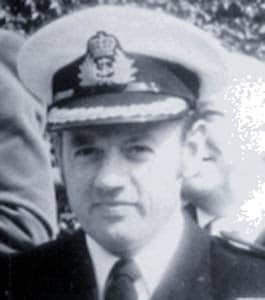 Commodore Tobin joined the Royal New Zealand Navy in 1951 and proceeded to the United Kingdom where he was posted to HMNZS Māori to train at the Britannia Royal Naval College and training cruiser DEVONSHIRE.  On promotion to midshipman he was posted to the cruiser BIRMINGHAM and experienced war service in Korea.  He describes cruiser operations in this conflict in some detail.

On return to New Zealand in 1955 Commodore Tobin served in KIWI at the end of her service with the RNZN and ROYALIST in 1957 followed by a posting to  IRIRANGI before returning to the UK in 1959  to specialise as air direction officer on exchange with the Royal Navy. He completed exchange service in ARK ROYAL and provides considerable detail of carrier operations in the early 1960’s. Upon his return to New Zealand in 1962 he served as Assistant Director of Plans under then Commander E.C. Thorne until 1964.

In 1964 he was posted to Singapore to serve as Defence Liaison Officer. He then was posted in 1966 to the new Leander-class frigate WAIKATO followed by service as XO of OTAGO. In 1969 he was sent to the UK as project officer for the new frigate CANTERBURY. Following a staff position, he was given command of WAIKATO in 1973. In 1975 he was Director of Naval Operations and Plans for CNS and returned to Auckland in 1978 to be Chief of Staff for COMAUCK. In 1979 he returned to the UK as Deputy Head of NZ Defence Liaison Staff and was promoted to Head of NZ Defence Liaison Staff in 1980.   In March 1984 he was posted to Command PHILOMEL and Captain Fleet Support. He completed his service in the RNZN in 1985.

Commodore Tobin made good reference to his midshipman’s journal and also his night order book whilst in command of WAIKATO.  These areas of the transcript are covered in some detail and with considerable accuracy.

It is important for people listening to the tapes or reading the manuscript to remember that these are the recollections of commodore Tobin.  Time and lack of resources have precluded the researching of facts to draw attention to any errors.