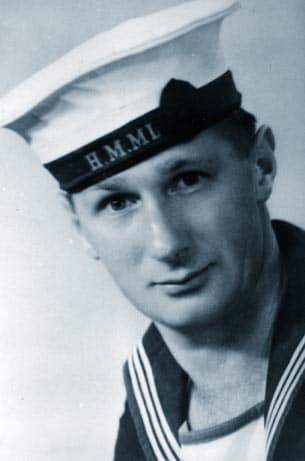 Able Seaman Kenneth Webley joined the Royal New Zealand Volunteer Reserve in the early 1930’s as a signalman.  A few years later he went farming in the Hawkes Bay so left the Reserve, though in 1939 he joined the lighthouse service.

In early 1942 Webley rejoined the RNZVR and after a mere six weeks of training in the shore establishment HMNZS PHILOMEL, he joined the training ship HMNZS WAKAKURA. At Webley’s time of service onboard HMNZS WAKAKURA the ship was working in New Zealand waters. After six months onboard, he returned to HMNZS PHILOMEL for further training before joining the fairmile ML407 in May of 1943. The ML407 saw service in the Guadacanal area based out of HMS KAHU, in the time of Webley’s service. While in the Pacific World War II hostilities came to an end and Webley was sent on leave back to New Zealand. Although initially destined to rejoin a ML out of HMS KAHU this was not to be, as Webley joined the electrical school at HMNZS PHILOMEL in November of 1944.

Webley was discharged in late 1945 having attained the rank of able seaman.