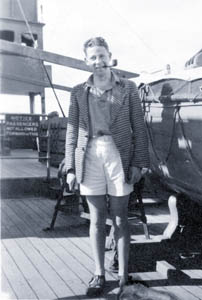 Temporary Lieutenant Frederick (Max) Cheshire joined the Royal New Zealand Navy under the auspices of Scheme F in 1941.  He was sent immediately to Britain via Panama for training onboard the Shaw Savill ship TAMAROA.  Upon arriving in Britain he proceeded to HMS ST VINCENT and on becoming an Able Seaman was posted to the training establishment HMS DRAKE for basic training before being posted in early 1942 to the destroyer HMS GARTH which was on escort duty on the east coast of England.  In July 1942, having completed his mandatory sea time Cheshire was posted to HMS KING ALFRED for officer training and was commissioned into the Royal Navy in August 1942 as a Temporary Sub Lieutenant.  While under training at HMS KING ALFRED, Cheshire was posted briefly to HMS DRAGONFLY and LOCH FYNE for assessment of suitability for the Fleet Air Arm training before being transferred in October 1942 to the Combined Training Centre HMS QUEBEC in Inverary for landing craft training.  Cheshire spent time onboard the vessel SOBIESKI, a converted troop carrier off the east African coast and was involved in exercises in Suez Bay prior to the invasion of Sicily.  While in SOBIESKI he was part of a landing party in Sicily and stayed on in the area for six weeks before boarding an (LST) Landing Ship, Tank  bound for Malta.  From Malta he proceeded to Tripoli and Bombay in search of SOBIESKI before eventually locating and rejoining the ship’s company.

Upon returning to Britain in mid October 1944 Cheshire took overseas service leave and sailed to New Zealand onboard the Shaw Savill and Albion Line vessel WAIWERA.  On the completion of his leave time he boarded the vessel STERLING CASTLE in order to return to Britain and was in Bermuda on VE Day.  While back in Britain he completed an astro-navigation course and was sent to HMS KING ALFRED to await passage home in the aircraft carrier HMS VICTORY.  In September 1945 he reverted to the RNZN and arrived back in New Zealand in late September 1945.

Frederick (Max) Cheshire was discharged in March 1946 having attained the rank of Temporary Lieutenant.