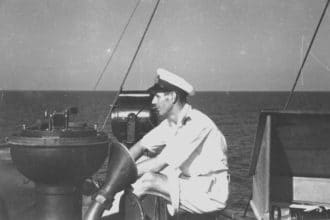 He later took command of the senior patrol launch HMS Wirihana, guarding the eastern approaches to Auckland Harbour.  Six months later in mid-1940 Palmer was sent to Britain with the first naval draft, which sailed onboard the vessel Empress of Japan, in company with the second echelon.

In late 1941, Palmer was posted as commanding officer to the ocean minesweeper HMS Cromarty which deployed to the Mediterranean via the Cape of Good Hope, to take part in the Madagascar landings, operations against the Vichy French and minesweeping between Alexandria and Tobruk.  HMS Cromarty also took part in the Sicilian and Italian landings, and was eventually mined during preparations for an assault on the south of France.  For his part in these many actions, Palmer was awarded the Distinguished Service Order and Mentioned in Despatches twice.  When HMS Cromarty was mined, Palmer was badly injured and subsequently spent the remainder of the war in various hospitals.

Charles (Bunty) Palmer was discharged from the Royal New Zealand Navy in 1946 having attained the rank of Commander.