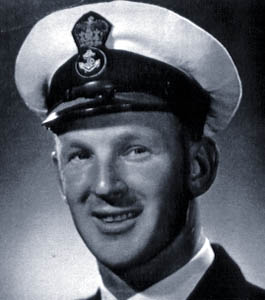 Lieutenant Commander Neville Peach joined the Royal New Zealand Navy as a Probationary Sick Berth Attendant in 1947, undergoing basic training at the shore establishment HMNZS TAMAKI on Motuihe Island.  In mid 1948 he was posted to HMNZS TAMAKI as a Sick Berth Attendant, staying on the island for a year before briefly joining the cruiser HMNZS BELLONA, then the frigate HMNZS ROTOITI, which subsequently went to Korea.  While in Korea, Peach was in the ship’s landing party and took part in the various raids undertaken on the coast.  In one of these Able Seaman Marchioni was killed.  In addition Peach was involved in a number of medical support activities including helping with wounded personnel from the vessels FMS CEYLON and RMAS MURCHISON .  During the return voyage to Hong Kong, HMNZS ROTOITI was involved in the conflict with pirates who had taken over the merchant ship HUPEH and this episode is well described.  Peach returned to HMNZS PHILOMEL at the end of 1951 and served out the remainder of his time at the Royal New Zealand Navy Hospital (RNZNH) until he was discharged in January 1951.

In mid 1953 Peach re-entered the RNZN and was posted to the cruiser HMNZS BLACK PRINCE where he spent the best part of a year, the highlight of which was the Royal Tour.  He then posted back to HMNZS TAMAKI.  Peach returned to the Royal New Zealand Navy Hospital in May 1955 and in July 1960 he was commissioned and promoted to Acting Wardmaster Sub Lieutenant.  Apart from time in the shore establishment HMNZS WAKEFIELD,  Wellington, he spent the remainder of his career in the RNZNH.

Neville Peach retired from the RNZN in 1977 having attained the rank of Lieutenant Commander.